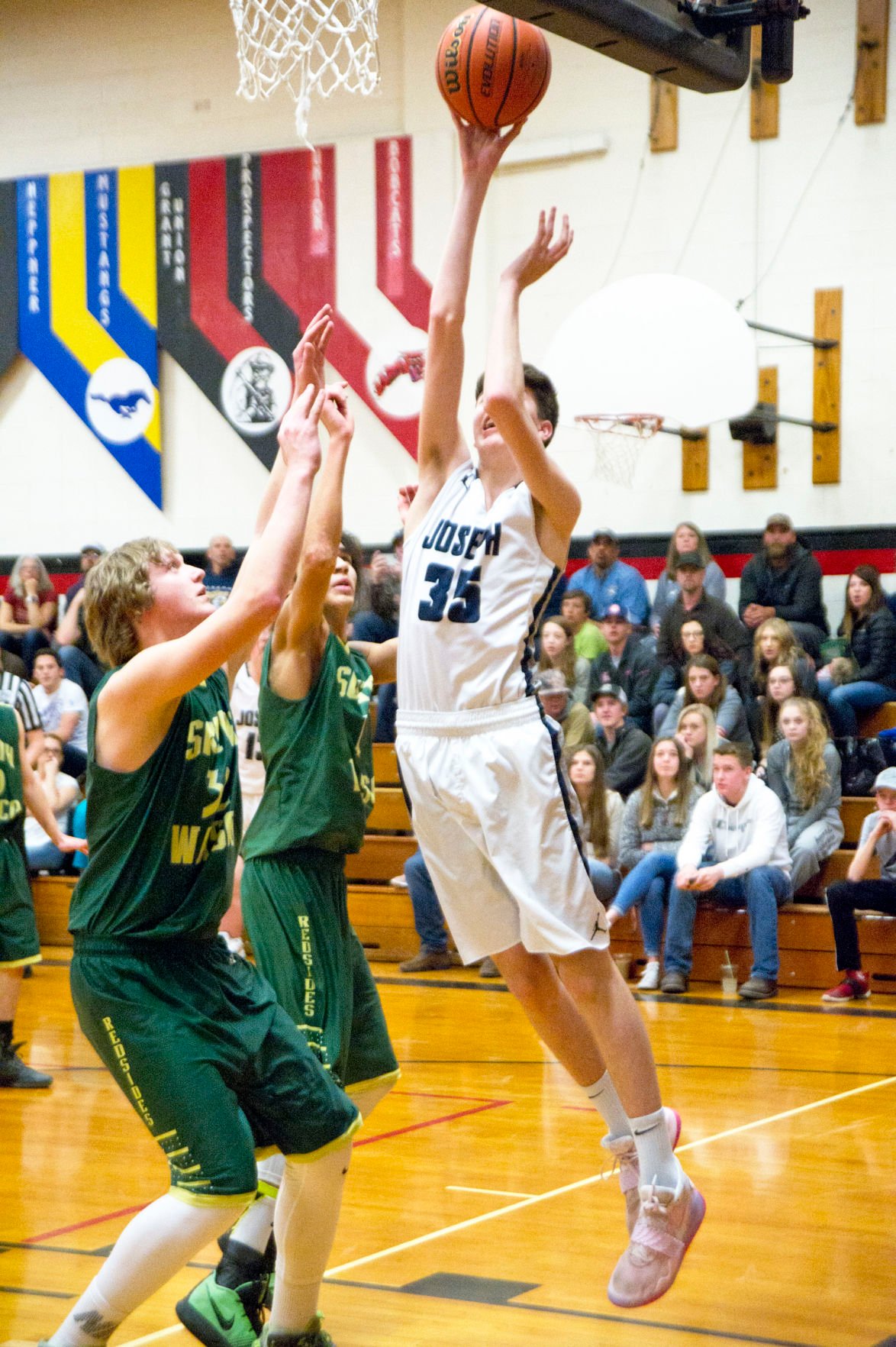 Sophomore JCS superstar, Grahm Barber, scores two of his clutch seven points in the final quarter of the Joseph Eagles’ narrow, 43-40 victory over South Wasco County in Enterprise on Feb. 29. 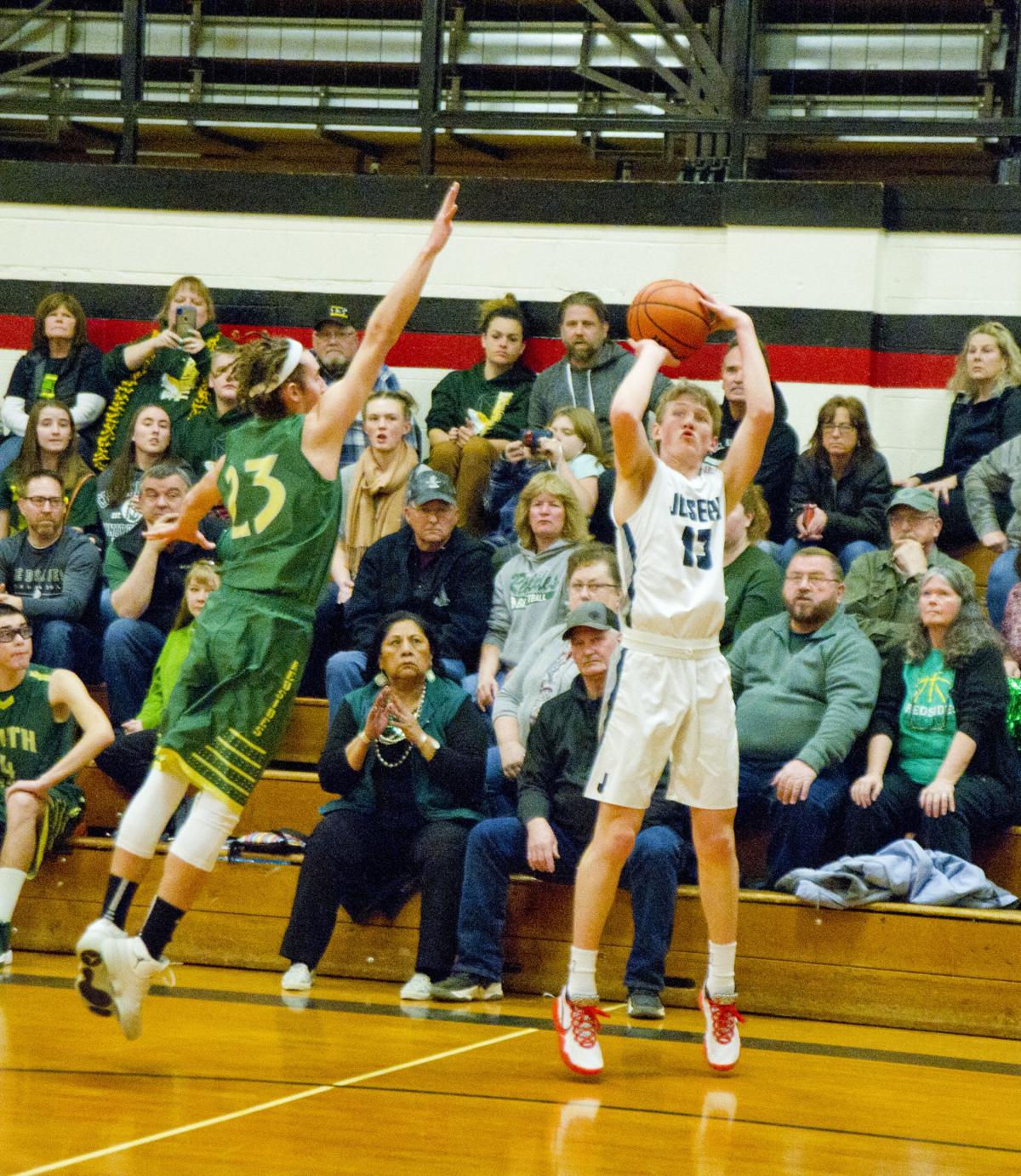 Too late — the South Wasco County player (green uniform) showed up a little too late to stop Mason Ferre’s three-pointer during the Eagles’ 43-40 home victory during the second round of state 1A basketball playoffs. 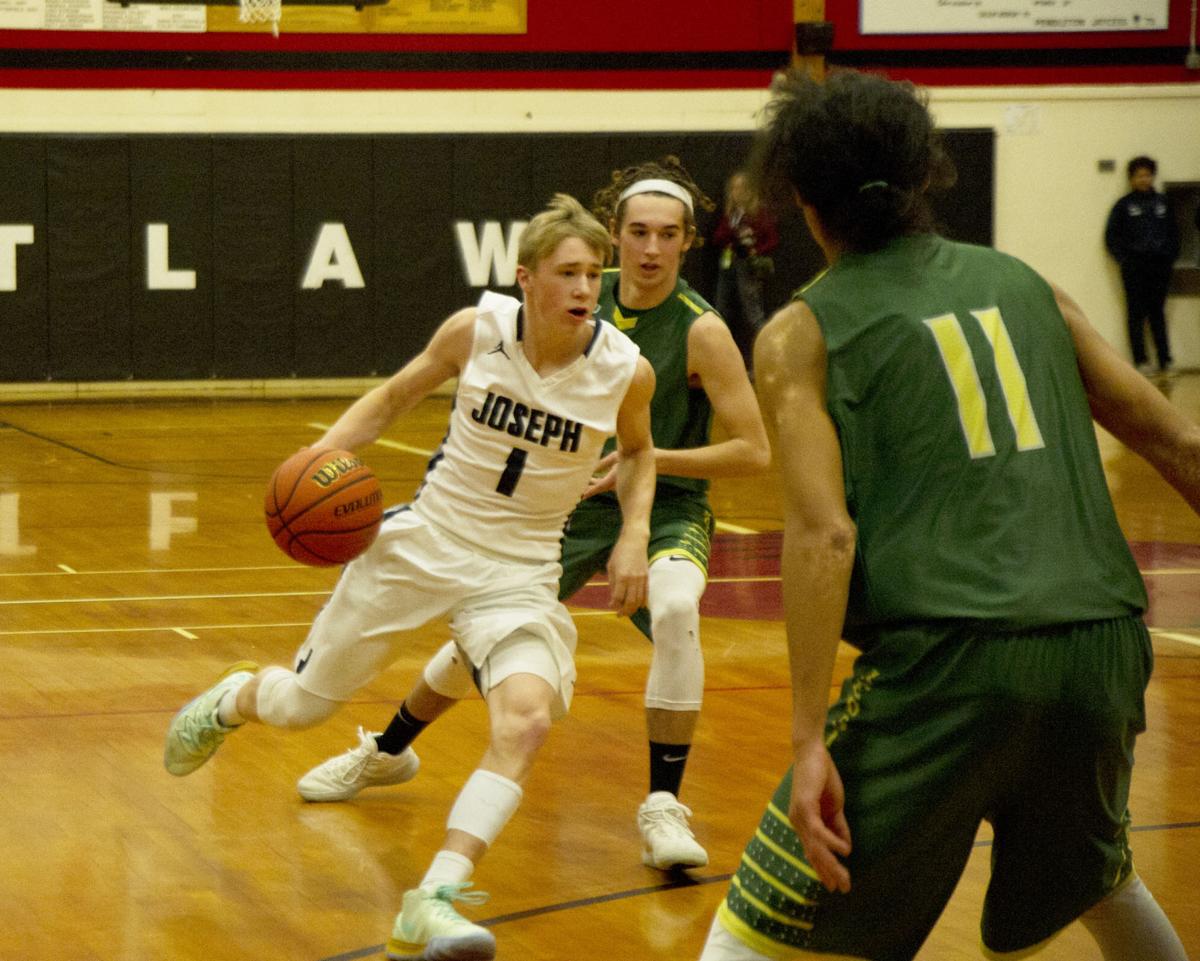 Sophomore JCS superstar, Grahm Barber, scores two of his clutch seven points in the final quarter of the Joseph Eagles’ narrow, 43-40 victory over South Wasco County in Enterprise on Feb. 29.

Too late — the South Wasco County player (green uniform) showed up a little too late to stop Mason Ferre’s three-pointer during the Eagles’ 43-40 home victory during the second round of state 1A basketball playoffs.

There was a big celebration in Enterprise’s gym and then in Joseph after a heart-stopping 43-40 Joseph Eagles boys victory over the South Wasco Redsides in the second round of state playoffs in Enterprise on Saturday, Feb. 29.

Especially tenacious defense on the Eagles’ part led to the victory behind Chase Murray’s 13 team-high points and a clutch offensive performance by Grahm Barber in the closing minutes that saw the sophomore scoring seven points to help put the Eagles up for good.

The game started tight, very tight, as the Eagles drew first blood on a Hadley Miller foul shot that the Redsides promptly answered with a bucket. Baskets traded back and forth throughout much of the contest. No team ever took a commanding lead. The score at the half saw the Eagles holding a frail, one point margin, 20-19.

The second half remained much the same. The Eagles had problems finding the bucket, but made clutch shots to stay in the fray while the defense more than ably did their part against a very physical and bigger Redsides squad.

Despite the game’s sheer physicality, no team exhibited any rancor, as players from opposite sides helped each other off the floor. Each squad exhibited an attitude of respect for the other’s abilities.

The final quarter started at a 32-32 tie with squads trading buckets yet again and the game’s outcome very much up in the air with fans on both sides roaring for the victory. However, the very disciplined play of the Eagles started to win out and JCS held a 41-37 lead with 1:18 left after a Chase Murray bucket.

The Redsides got called for traveling and with 51 seconds remaining, Barber dumped in the final hoop for a 43-37 lead. The Redsides weren’t done yet, and with 41 seconds remaining sank a three-pointer. The Eagles missed a one-on-one foul shot that gave the Redsides one last chance, but the defense held strong, and it was over as the crowd roared.

“It feels real good,” coach Olan Fulfer said of the victory. “We worked our tails off in practice to play that kind of defense. That’s a tough team, an explosive team that gets seventy points oftentimes.”

Fulfer noted that the victory proved how much the team listened and how much they wanted to be great. He said early foul trouble and less than stellar shooting couldn’t take away from the shining defense. Turnovers were close to a season low with a mere 10 on the books.

“They never gave up, and I just love this team so much,” he said.

Late game hero, Barber, said the win felt good and he only worried a little bit about the final outcome in the waning moments. He gave credit to his teammates for the win.

“We have pride in our teamwork,” he said. “We’re really there for each other.”

“I was confident, but I didn’t want to get too happy,” he said. “I trusted our defense and trusted we wouldn’t turn it over and get them (the Resides) another shot. I trusted my guys and knew we could get the job done.”

“I put everything I had into not letting him (Olson) have the ball,” he said. When reminded that Olson didn’t score in those tense final minutes, Murray grinned and said,” On to Baker.”

The Eagles next play second-ranked Triad in Baker at 8:15 p.m. on Thursday, March 5.