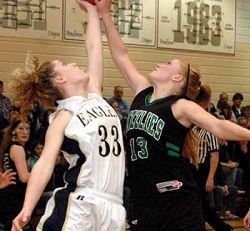 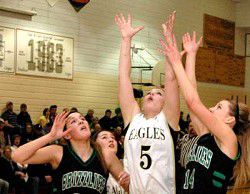 The Lady Eagles made it back to a familiar place.

Joseph High School's basketball team, maintaining a legacy, wrapped up this season in the tournament for the state's championship. The previous four also finished there. Playing in the first round Feb. 23 at their home court, the girls lost to the Grizzlies from Griswold High School in Helix by a score of 54-26.

"Coming into this year, we weren't sure how it would go," said senior Josey Kohlhepp, who scored 6 points. "We had only five girls returning from last year. But I'm really happy with how things turned out."

The Eagles, outnumbered and inexperienced, managed 11 victories. Highlights happened late in the season. The improving team earned a come-from-behind win Feb. 6 against Wallowa, and upset Pine Eagle in a semifinal of the district tournament. That clinched a return to the state playoffs.

The first round dealt the Eagles a challenge. Griswold, out of the Big Sky League, already had a win over Joseph. It was a 54-42 decision at the Winter Classic in Enterprise. That day, Dec. 11, the Grizzlies mounted a 26-7 lead at halftime. The Eagles rallied in the third quarter, trimming the edge as close as four points.

In a rematch, the Grizzlies refused any chance at a comeback. Their 26-9 advantage at the break increased until it was 44-16 after three quarters. Kylee Rogers ended up scoring 15 points, Chyanne Hack banked 13 points, Claire Ely had 10, Addie Terjeson 8 and Meghan Schroeder 8.

Next year, Joseph will have another young team. Graduation will take away three starters: the top scorer and a dangerous shooter from three-point range (Bird), a guard with a knack for big baskets in the fourth quarter (Josey), as well as this season's answer for points and rebounds in the frontcourt (Warnock). However, a handful of girls, who learned and developed over this season, will return with experience in the state playoffs.

"When we started off, we had no point guard and we didn't know each other," Warnock said. "But once we started playing, we got comfortable together and figured things out."