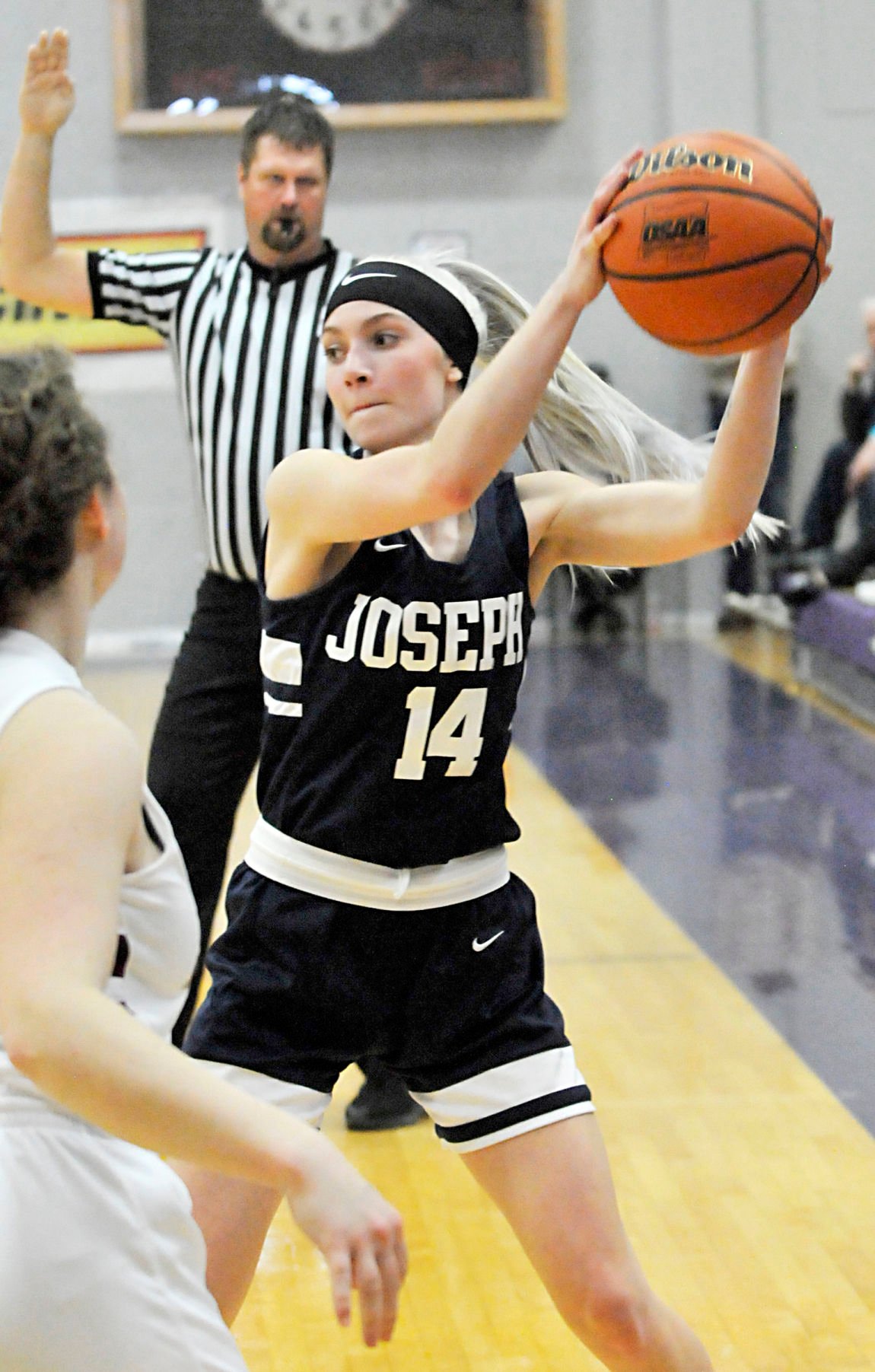 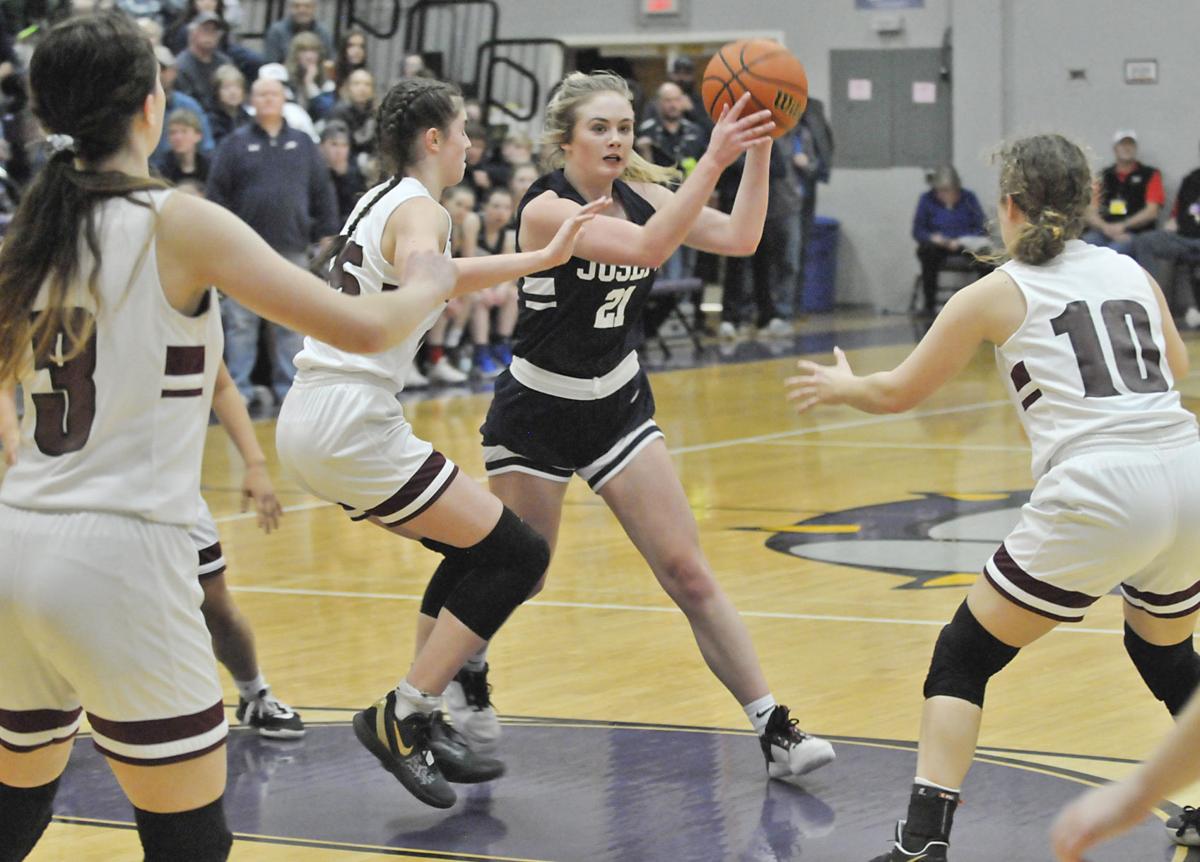 Sabrina Albee handles the ball in the key. 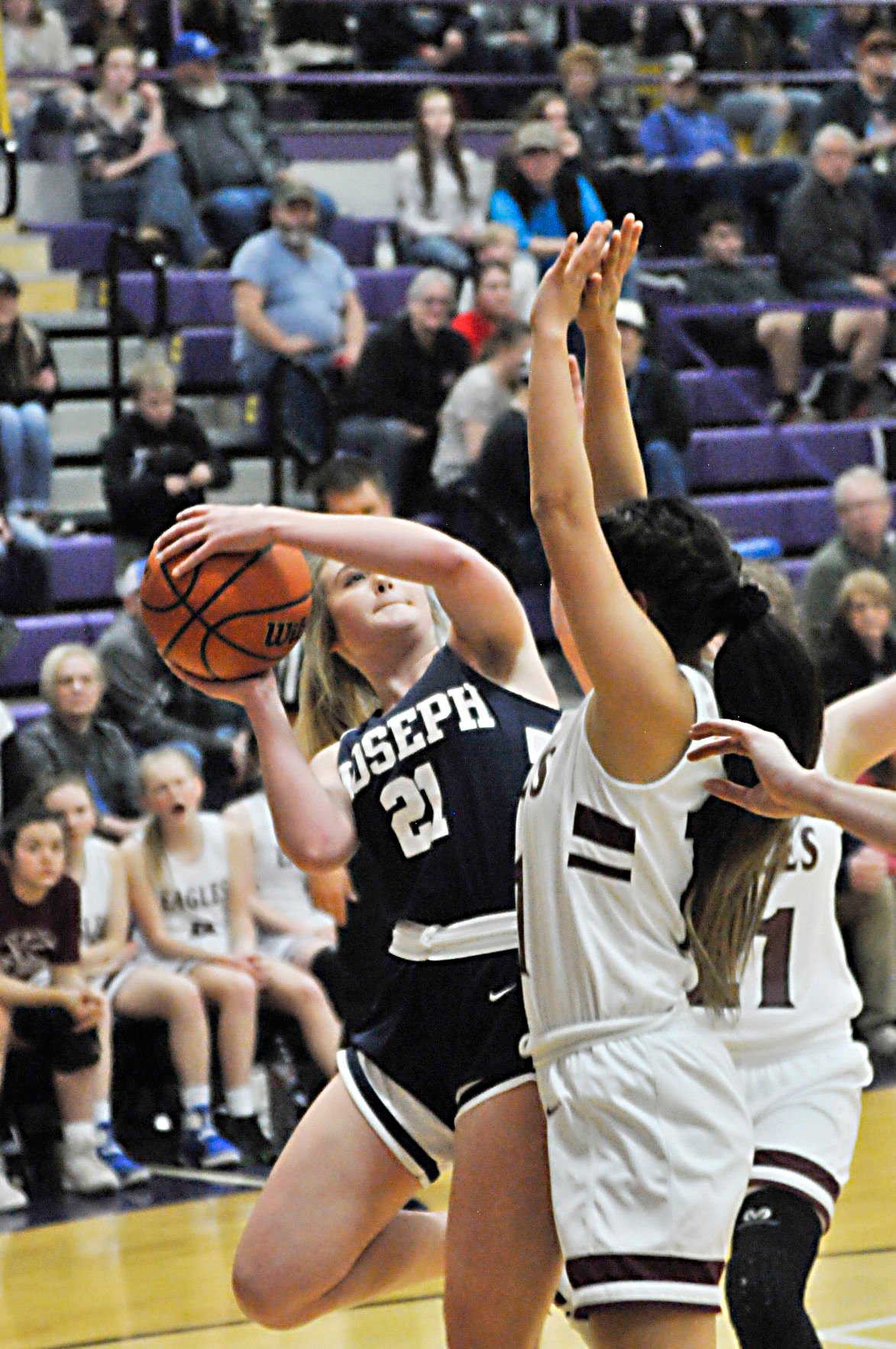 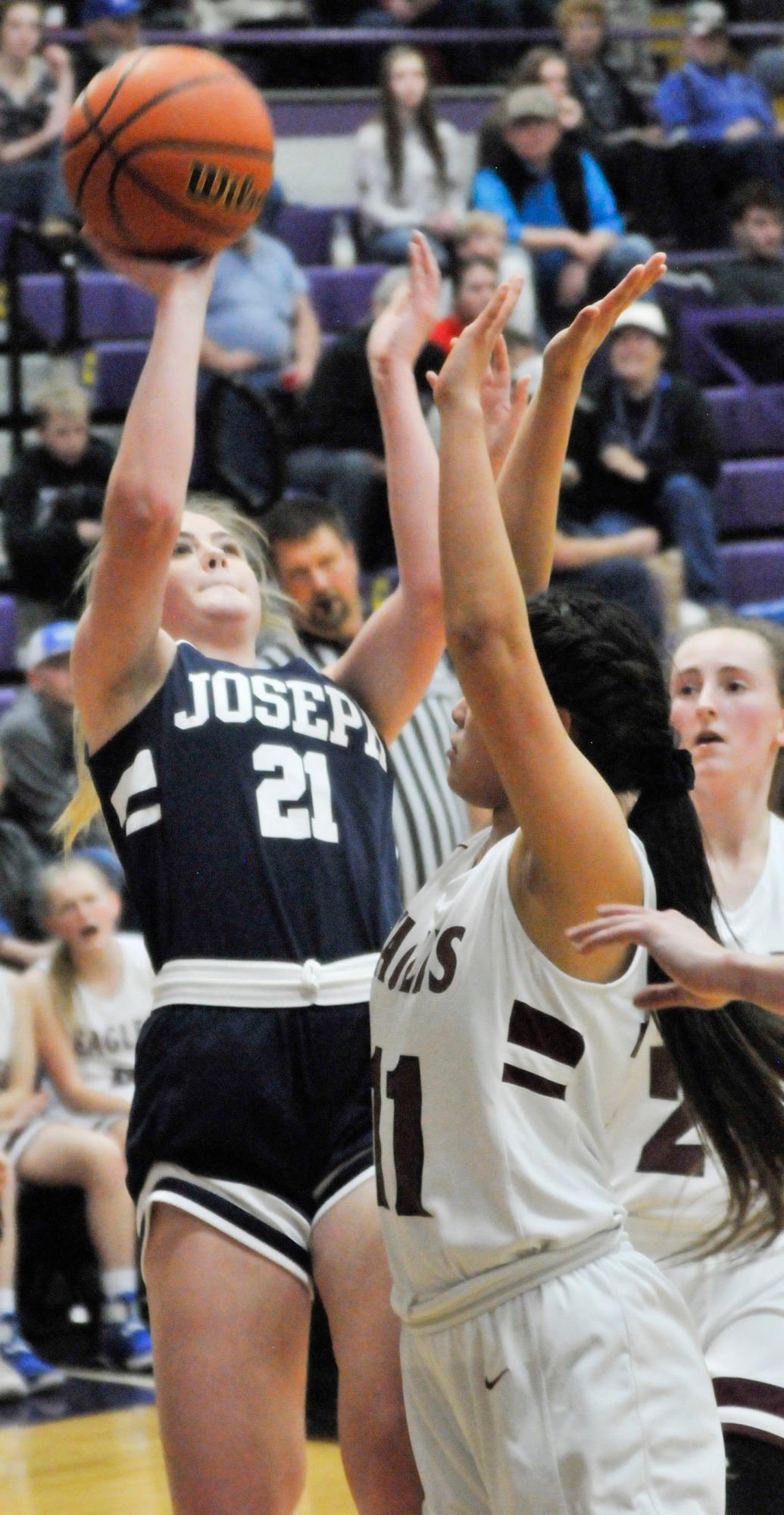 Sabrina Albee handles the ball in the key.

Joseph Girls won their Wednesday afternoon game with Damascas Christian, 42-27, sending them into a quarter-finals matchup with #1-ranked Crane on Friday at noon.  With 8 seconds left, Sabrina Albee stole the ball, dribbled up the court, was fouled and sank the two foul shots to seal the deal.

Stellar defense, sharp shooting early and a response when Damascus Christian made a rally Wednesday sent the Joseph Eagles to the state semifinals for the first time since 2009.

Sabrina Albee scored 14 points and had two crucial baskets late in the third to halt a 13-0 Damascus Christian run, and the Eagles held Damascus Christian to its lowest point total of the season and ended its 16-game winning streak with a 42-27 win at the 1A state tournament at Baker High School.

“We’re not big,” head coach Lance Homan said with a laugh, “and so for us, we rely on defense. If we can keep teams from scoring what they normally do we feel like we have a chance, so we base everything on that.”

The Eagles held Damascus Christian nearly 22 points below its average of 48.8 points per game.

“We do have quick hands, we have quick girls,” Homan said. “We try to get them where we make plays.”

The play of the defense and some early offensive success — Joseph hit four first-half 3-pointers — helped the Eagles to go ahead by as many as 17 points late in the first half as they seemed to be in complete control.

“The first quarter when we had our run, I knew we were working together and that was good,” said Albee, who had eight points in the first half.

Damascus Christian got within 26-14 at halftime on an Ally Love jumper and a corner 3-pointer by Noelle Wakefield, then spent the first six minutes of the third chipping away, with two free throws by Sierra Hale cutting it to 26-22.

But Joseph didn’t panic, showing a trait Homan has seen from the team all season.

“You know they’re going to make a run, but it’s trying to withstand that and then having your own. They are hard to shake,” Homan said of his team. “They don’t get down, they’re pretty level headed, and they want to be here.”

Albee got loose in the corner, drove baseline and got a tough runner to bounce in with 1:40 to play in the third to end the run and a nearly eight-minute scoring drought, then scored on the low block on the next possession. Crenshaw followed with a putback before the quarter ended to put Joseph up 32-22.

Jumpers by Rylee Wilcox and Crenshaw helped put Joseph ahead by 12 early in the fourth, and Damascus Christian got no closer than 11 the rest of the game.

“I feel like we always just know we’re going to win. In a way, we have that confidence,” Micka said of how the team stayed poised during the third quarter slump.

Micka said she’s looking forward to the rematch with Crane, which beat the Eagles 54-30 earlier this season.

Noelle Wakefield was the high scorer for Damascas Christian with 9 points and 1 assist.