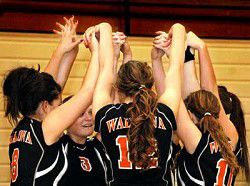 In one volleyball match, Oct. 10 at Joseph High School, the Lady Cougars claimed a measure of revenge against the home team. Just 10 days earlier in Wallowa, they jumped all over the Eagles and took the first two games, only to drop three in a row, and with them, the overall contest. In a rematch, however, Cougars finished their job and downed the Eagles in four.

"We had confidence in ourselves," Wallowa senior middle blocker Meagan McKenzie said. "We knew we could beat them. We did it at Joseph's tournament. It's just a matter of playing our game."

For the first time this season, Wallowa girls defeated another team in Old Oregon. Their record of 1-5 equaled Joseph for fifth place.

The Cougars overcame several challenges from the Eagles. Joseph opened the match by scoring seven unanswered points. McKenzie and sophomore outside hitter Skylar Waters jumpstarted the Cougars by teaming up to block several above the net. The Eagles still led by the score of 23-19, when the Cougars reeled off six straight points, including the decider.

After Joseph took Game 2 by a 25-21 margin, Wallowa owned the rest of the match.

But Joseph threatened to make another devastating comeback. In the fourth game, the Eagles quickly went up 8-1. Meagan McKenzie responded with a couple of aces and Wallowa later drew even. Senior Megan Goller's kill made it 21-21. The Cougars then trailed by two when they made one final push. Goller dug a volley off her shoelaces and bumped the ball to Waters, who set up senior Anna Chrisman for a resounding kill that sealed the overall victory.

Wallowa's win at Joseph alleviated disappointments from the previous day in Halfway, where the Cougars lost all three games at Pine Eagle High School, 25-21, 25-11 and 25-18.

The Cougars will play the next two weeks at home. They will host Powder Valley on Oct. 16. The following day, Pine Eagle will visit Wallowa.