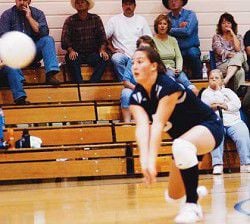 <I>Hector del Castillo/Chieftain</I><BR>Ssophomore Mariah Warnock makes a dig, but Cove's hits were often out of reach. 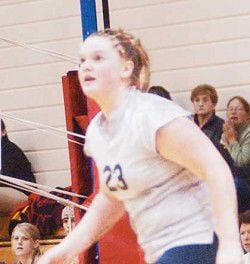 <I>Hector del Castillo/Chieftain</I><BR>Ssophomore Mariah Warnock makes a dig, but Cove's hits were often out of reach.

Joseph is in the middle of a stretch of home games, hosting opponents of the Old Oregon league for five consecutive weeks, but the Eagles have lost the first two. On Tuesday, Wallowa won in three games, and Cove did the same.

The Lady Leopards made strong serves and powerful hits, and the Eagles had trouble getting to the open spots quickly enough.

"Cove's been a hard hitting team," Joseph senior Megan Yost said. "We expected that, so we played them aggressively and came at them. Our goal at the end was to not give them any free balls."

Yost finished the day with 7 kills and 8 blocks. She was serving when the Eagles made a solid rally in the first game.

Cove scored the first five points and had a 7-1 lead, when Yost start serving. The Eagles knotted the game at 7-7. Joseph was winning, 9-8, very briefly, but Cove made hard hits to take command.

By the time the Eagles called for a break, Cove was up, 20-14. Even out of the timeout, the Leopards kept pounding away and went ahead 24-16. They held off another rally from the Eagles and got the deciding point to start the match in Cove's favor.

Cove won the second game, and then survived another Joseph push to take the third one. The Leopards had a 4-0 lead and kept the margin out to 17-14. Then, with Yost serving, Joseph tied the score.

The game remained even, at 19-19, but the Leopards broke out for six unanswered points to finish the match.

Joseph hosts Imbler on Friday, with the match beginning at 4 p.m.