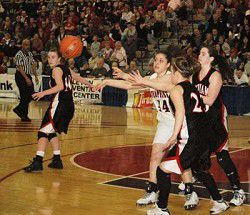 PENDLETON - The Lady Outlaws started by winning a quarterfinal and finished with the fifth place trophy.

In the final rounds of the state's Class 2A high school basketball playoffs, Enterprise High girls won one of their three games at the Pendleton Convention Center. The Outlaws advanced to a semifinal after they defeated the Oakland High Oakers, 52-49. But the next day, the eventual state champions, the Santiam High Wolverines, scored a 54-38 decision and knocked them out of contention. The Outlaws then closed up their season with a 58-41 loss to St. Mary's in a consolation.

"Starting this season, we really didn't think we'd make it this far," senior Kayla Foster said, following the Santiam game. "But we improved so much. Everybody chipped in and worked their hardest."

The Outlaws began with promise in their quarterfinal. They held off a pesky Oakland squad. The Outlaws owned most of the first half and built a 29-15 lead three minutes before the break. Already, De Spain and Foster both had tallied eight points. Butterfield had seven, including her three-pointer. But the Oakers fought back. During a three-minute stretch in the third quarter, they reeled off six straight baskets and nosed ahead 39-37. Molly Earls added a free-throw, making a three-point margin. The Outlaws responded with a 9-0 run. Butterfield scored to open the fourth quarter and put Enterprise in front again. The Outlaws protected their edge to the end.

"We were pretty confident after the way we played (against Oakland)," Foster commented.

Even before the semifinal, Enterprise knew it had its hands full against Santiam. The Wolverines, 24-1 and the Tri-River Conference champs, had only lost once. That required overtime. They jumped up the Outlaws, 9-0. Just 30 seconds remained in the first quarter, when Foster hit the first Enterprise field goal. Once Enterprise ran its effective full-court press, Santiam struggled. On three consecutive possessions, De Spain, O'Leary and Butterfield stole the ball. Foster's three-pointer cut Santiam's lead to 15-12 midway through the second quarter. Later, the Outlaws closely trailed 24-20.

"Our press is very effective," Foster said. "It's hard to break."

However, the Wolverines quickly pull away after halftime. Led by an unstoppable duo - Ashley Walczak and Heidi Halemeier - they kicked off the third quarter by scoring three straight baskets. By the end of the third, they accounted for all of Santiam's offense in a 45-26 advantage. They continued to increase the lead to the end. Walczak finished with 26, Halemeier 21, while Kara Stair added seven points in the final quarter.

The next day, exhaustion of a long winter finally caught the Outlaws. Playing St. Mary's for third place, Enterprise made one more decisive run. Trailing the Crusaders 24-21 three minutes before halftime, the Outlaws combined eight straight points. Foster and O'Leary each made free-throws. De Spain, Foster and Neil added layups. In the third quarter, they managed to stay even with the Crusaders. De Spain's jump shot kept Enterprise ahead 40-36, as two minutes remained in the third. But the rest of the game, the Outlaws surrendered possession of the ball 15 times. And St. Mary's limited Enterprise to a foul shot by O'Leary.

Outside of the last quarter, the Outlaws enjoyed a strong season. Next year's team will miss a strong class of seniors. Foster, Bruce and Neil made up a quick backcourt. O'Leary and Morello were two aggressive forwards. However, Enterprise boasts several returning veterans. De Spain led the team in scoring. Butterfield was another sharp outside shooter. Off the bench, Stangel contributed eight rebounds at Pendleton. Also, many youngsters - Alex McCadden, Karli McCarthy, Hannah Graham and Shelby Graning - gained experience on the court during the state playoffs.