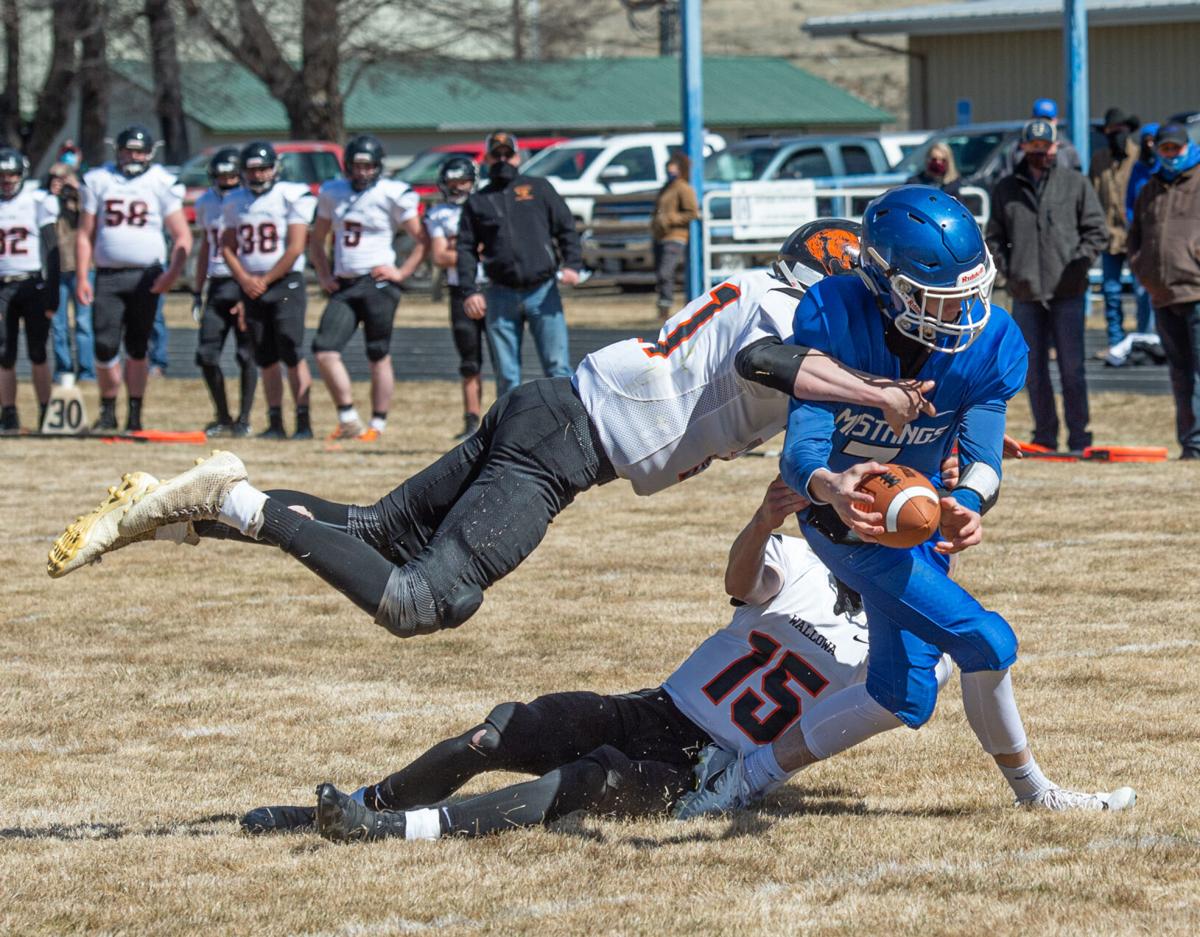 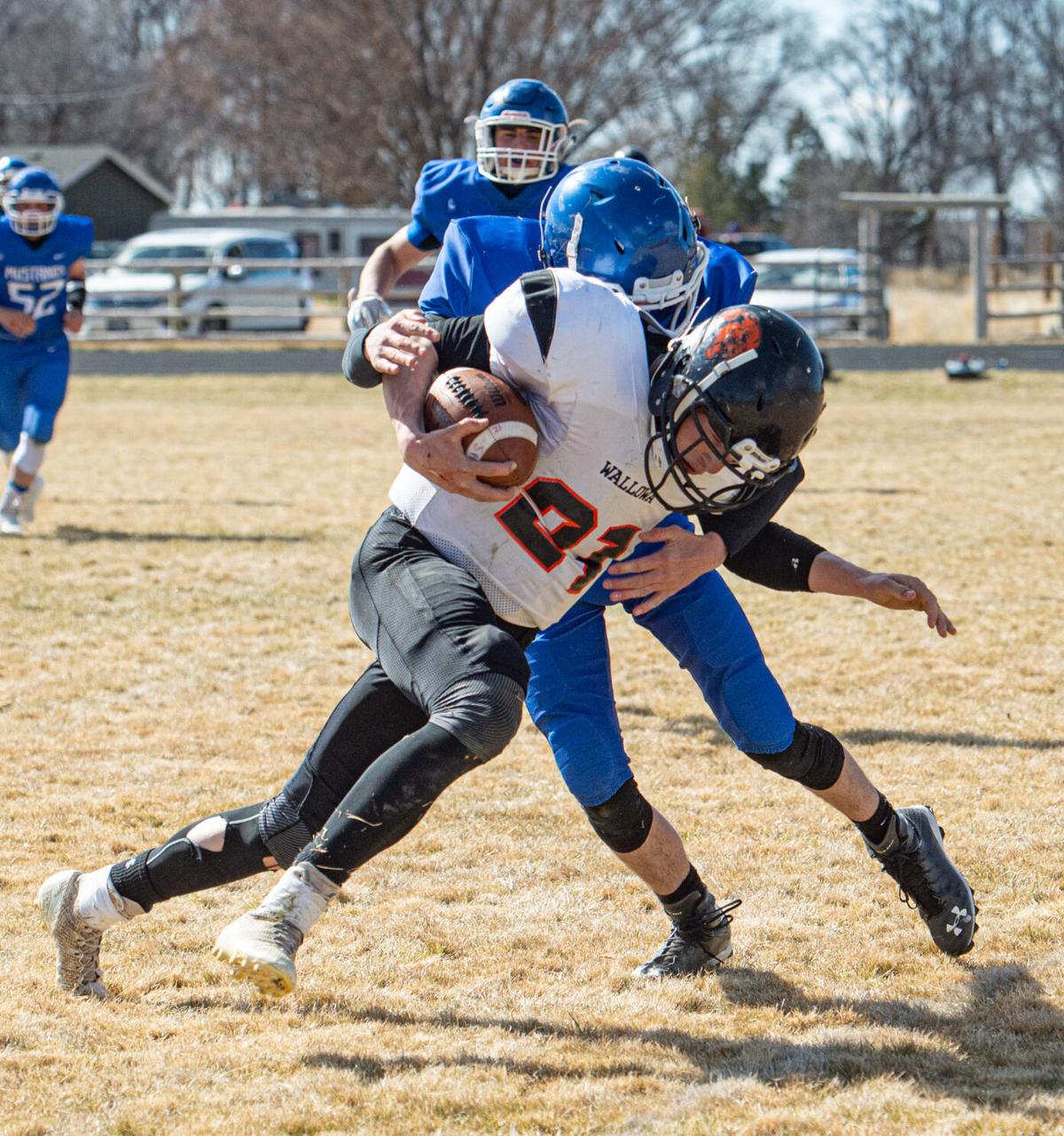 Zeb Ramsden breaks the first of four tackles he smashed through on his way to a Wallowa touchdown Tuesday, March 23, 2021, in Crane. 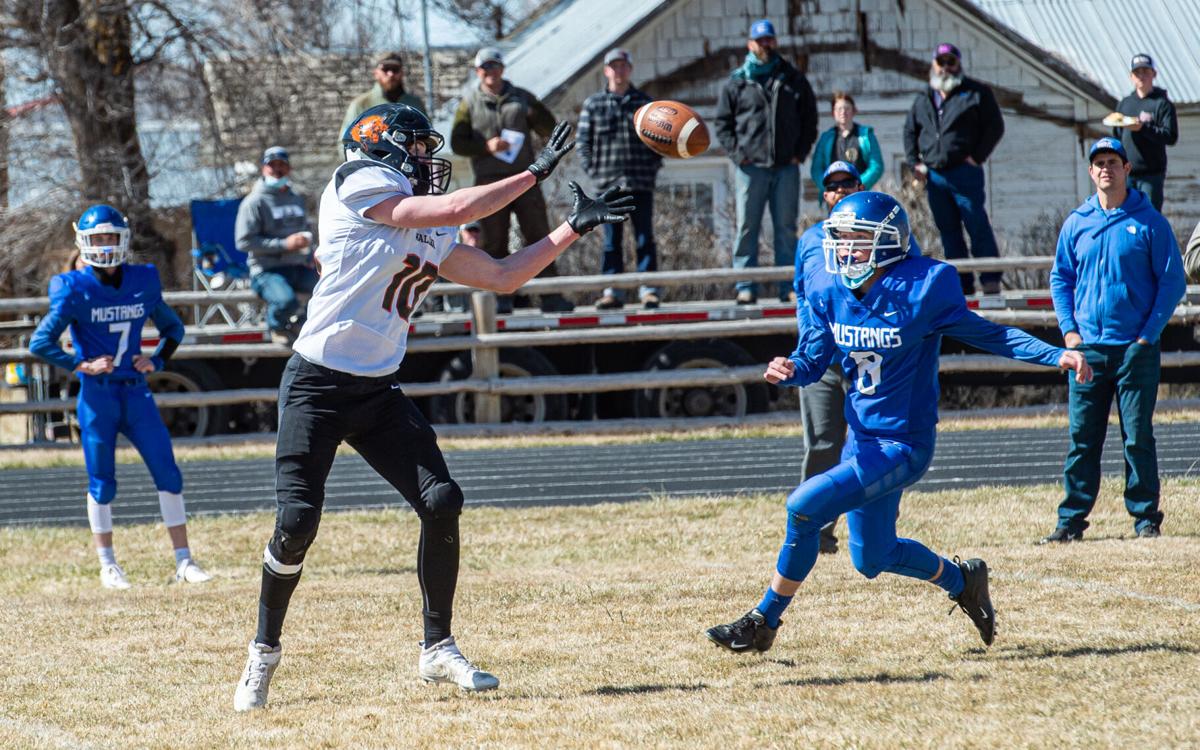 Zeb Ramsden breaks the first of four tackles he smashed through on his way to a Wallowa touchdown Tuesday, March 23, 2021, in Crane.

CRANE — It was a perfect sunny afternoon for football in the small desert community of Crane — unless you were the Wallowa Cougars.

On Tuesday, March 23, the Cougars (2-1 overall) suffered a painful last-minute loss to the Crane Mustangs by a score of 28-22.

“It was disappointing. We just had a lot of little timely mistakes that cost us the football game,” Wallowa head coach Matt Brockamp said.

The Cougars kept pace with the Mustangs throughout the contest, keeping the game tied or within one score until they pulled ahead, 22-20, in the fourth quarter.

Zeb Ramsden’s dazzling 53-yard catch and run to the end zone gave Wallowa the lead in the fourth. Ramsden broke four Mustang tackles on a power-ramble to give the Cougars the lead. A win seemed in sight.

“Zeb’s a heck of a football player, and that was a great play when we needed one,” Brockamp said.

But the Mustangs bowed their necks, took the bit in their teeth and scored on the next possession. It was 28-22.

With Lute Ramsden under pressure, several of his passes were out of reach of receivers in the last critical downs of Wallowa’s final fourth-quarter possession. But Wallowa moved the ball ably on the ground. They did, at least, until they fumbled.

With less than 2 minutes to go, the fumble was disastrous. Crane recovered.

Crane took a knee and ran out the clock.

“We had them on the ropes. We were ahead by 22-20 with 3-½ minutes to go. We were moving the football and running the ball well. And then (we) coughed it up.” Brockamp said. “That was a killer.”

But there were many bright spots in Wallowa’s loss.

Lute Ramsden went 18-for-34 in passing for a total of 241 yards in the air and three touchdowns. Zeb Hermens tossed the ball twice for 55 yards after taking a pitch from Ramsden. Zeb Ramsden was his brother’s favorite receiver, snagging eight passes for a total of 163 yards and two touchdowns. Hermens corralled three passes for 53 yards and one TD.

Defense was a whole-team effort led by Zeb Ramsden led on tackles (eight) and assists (10) followed by Jesse Duncan with six tackles, seven assists and one sack.

The fact that two of Wallowa’s hardest-working stars played injured may have contributed to the team’s loss.

Hermens had back and neck problems that cut down on his ability to turn his head and to tackle.

“You could tell he was really uncomfortable, and he was just in pain the whole game,” Brockamp said.

“Tristin Bales had continuing lower back problems from an injury from the Enterprise game when he got hit in the end zone,” Brockamp said. “After X-rays and ultrasounds, he was cleared to play by his physician, but he just was not right. Especially his lateral motion was not what he can do.”

“Crane is a hard place to win football games,” Brockamp continued. “They are a talented team and a tough opponent. The kids played hard. In the end they were all bloody and exhausted.”

“Wallowa really should have won that game,” Crane Mustang assistant coach Fred Maupin said after the game concluded. “They were really the better team.”