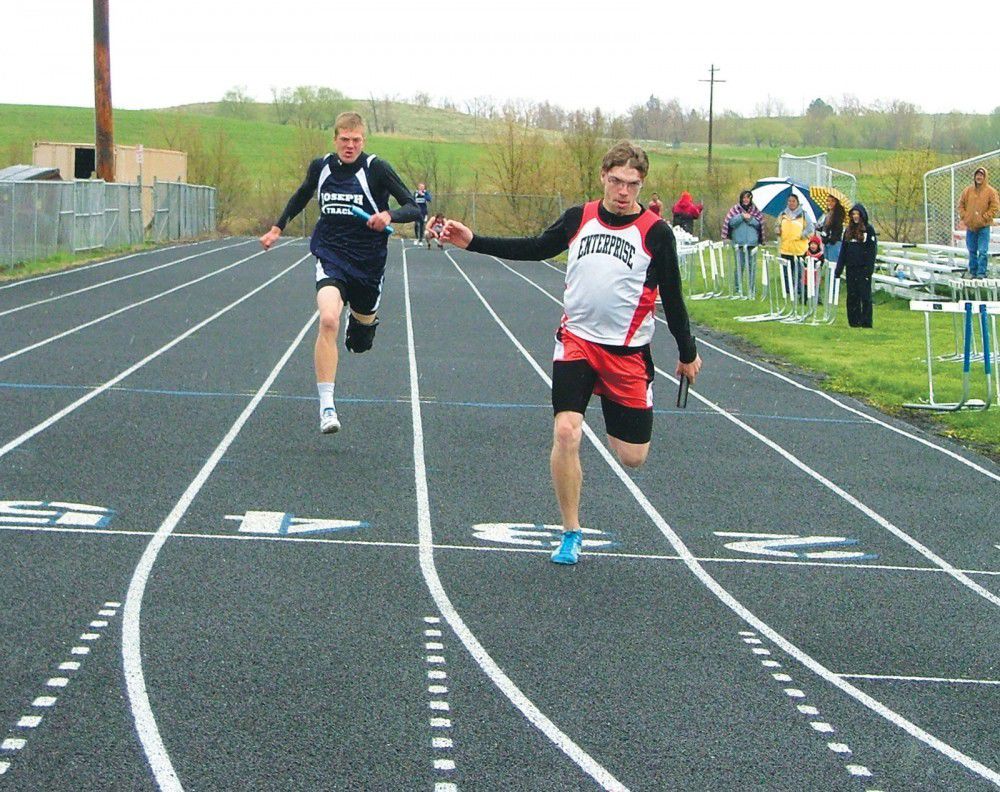 <p>Austin Burns, right, , the final leg of the of the Enterprise-Wallowa 400m relay team, edges out Joseph's Kaden Lathrop at the finish line.</p> 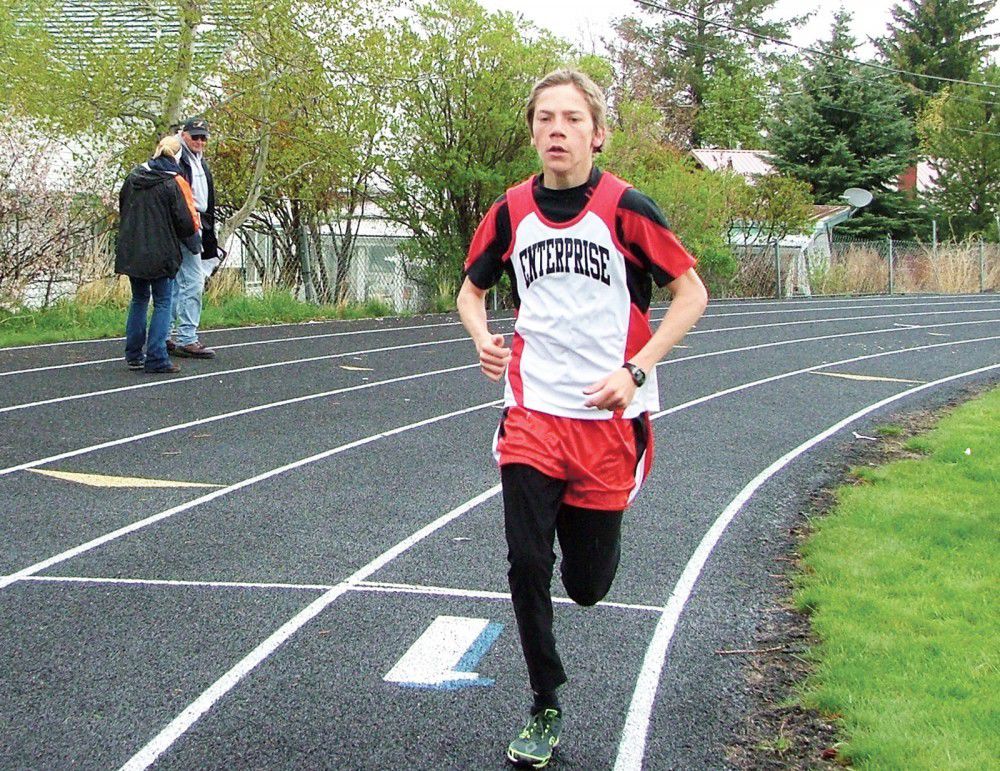 <p>The rest of the field isn't even in sight of leader David Ribich of Enterprise High School during the 1500 meter run.</p> 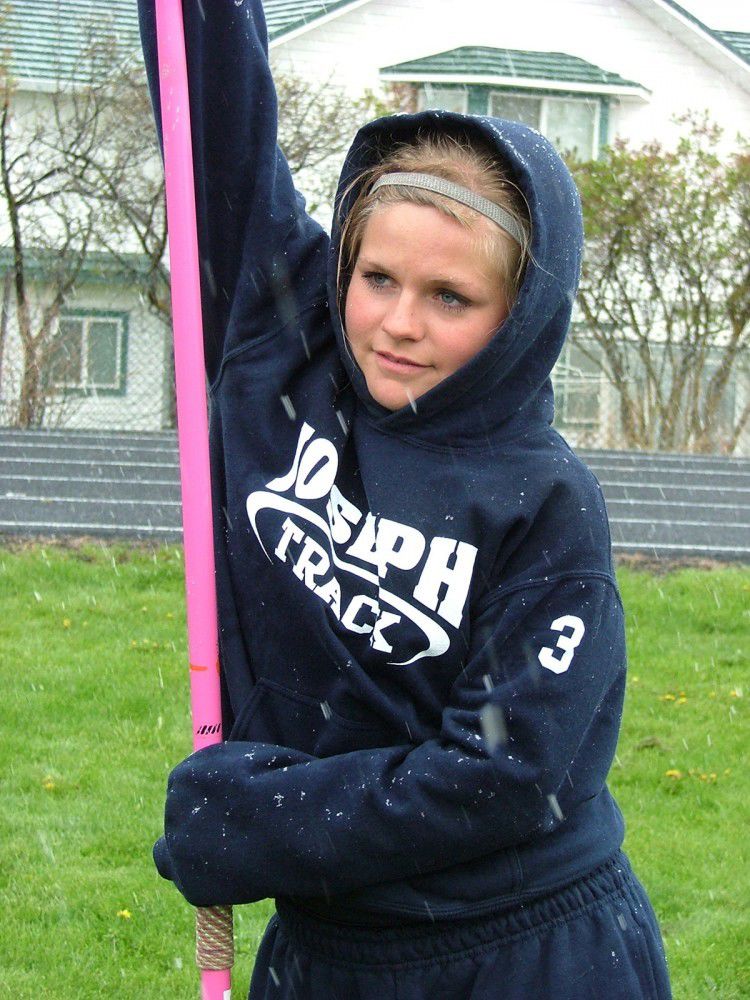 <p>Joseph's Rebecca Cummins waits her turn to throw the javelin at the Joseph Invitational track meet Friday, May 4.</p>

<p>Austin Burns, right, , the final leg of the of the Enterprise-Wallowa 400m relay team, edges out Joseph's Kaden Lathrop at the finish line.</p>

<p>The rest of the field isn't even in sight of leader David Ribich of Enterprise High School during the 1500 meter run.</p>

<p>Joseph's Rebecca Cummins waits her turn to throw the javelin at the Joseph Invitational track meet Friday, May 4.</p>

Although some commendable times and distances were recorded Friday at the JoHi Invitational, in Joseph, the longest-lingering memory will be the weather which had athletes huddled under blankets between throws, jumps, and runs.

The weather fluctuated from rain to snow flurries to sleet to wind; the only constant being that it was a cold day in early May.

As theyve been doing much of the season, the Enterprise-Wallowa boys won the mens meet with 173.5 points and Joseph placed second with 161.5 points.

Far behind them in a tie for third place with 68 points were Imbler and McLoughlin.

Joseph senior Trevor Lewis, performing before the cold, home crowd, had a perfect day as a track athlete by winning all four events he could participate in.

Wallowa County sprinters claimed the first five spots in the 100-meter dash with Dustin Dean and Josh Higginbotham, of Enterprise-Wallowa, finishing 1-2 in times of 12.2 and 12.29. Also placing behind them were B.J. Warnock (JHS), Eric Schwendiman (Ent-Wal), and Gage Jarman (JHS).

Enterprise-Wallowa sophomore David Ribich had no competition in the distance races. He ran 4:34.54 while winning the 1,500-meter race by 16 seconds, and then ran the longest race available at the high school level, the 3,000 meter, where Ribichs time of 10:18.97 was one minute and four seconds faster than the second-place finisher.

Another two-event winner, for Enterprise-Wallowa, was junior Austin Burns who not only ran a fast 2:03.21 800-meter race on a soggy track, but also was on the coop schools winning 4 x 100-meter relay team along with Dustin Dean, Alex Tyler, and Jordan Widener. They ran the race in 46.81. Burns also ran the leadoff leg in the 4 x 400-meter relay race where EHS-WHS placed second.

As they did in the 100-meter dash, the schools from Wallowa County stole the top five places in the javelin.

Enterprise-Wallowa senior Erich Roepke dominated the field of 24 throwers by heaving the spear 1742. Thirty feet behind Roepke was teammate Jordan Widener, followed by a trio of Warnocks from Joseph; Cole, Wyatt, and Tyrel.

In the shot put, Ent-Wal senior Stephen Quarrey topped 23 competitors with a heave of 3910 ½. He also placed second in the discus.

Although he won no individual events, JoHi freshman Kaden Lathrop did himself proud by earning seconds in the 300-meter hurdles, high jump, and running the fourth leg for Josephs second place 4 x 100-meter relay team.

Among the nine teams that participated in the girls meet at Joseph, Enterprise-Wallowa finished second with 107 points and Joseph 8th with 11 points.

Two other local lasses who earned first places were Linsey VanDoozer, easily winning the 800-meter run in a time of 2:41.9; and Elsa Steen, who won the 300-meter hurdle race in a time of 53.23. Both of those girls perform for Ent-Wal.