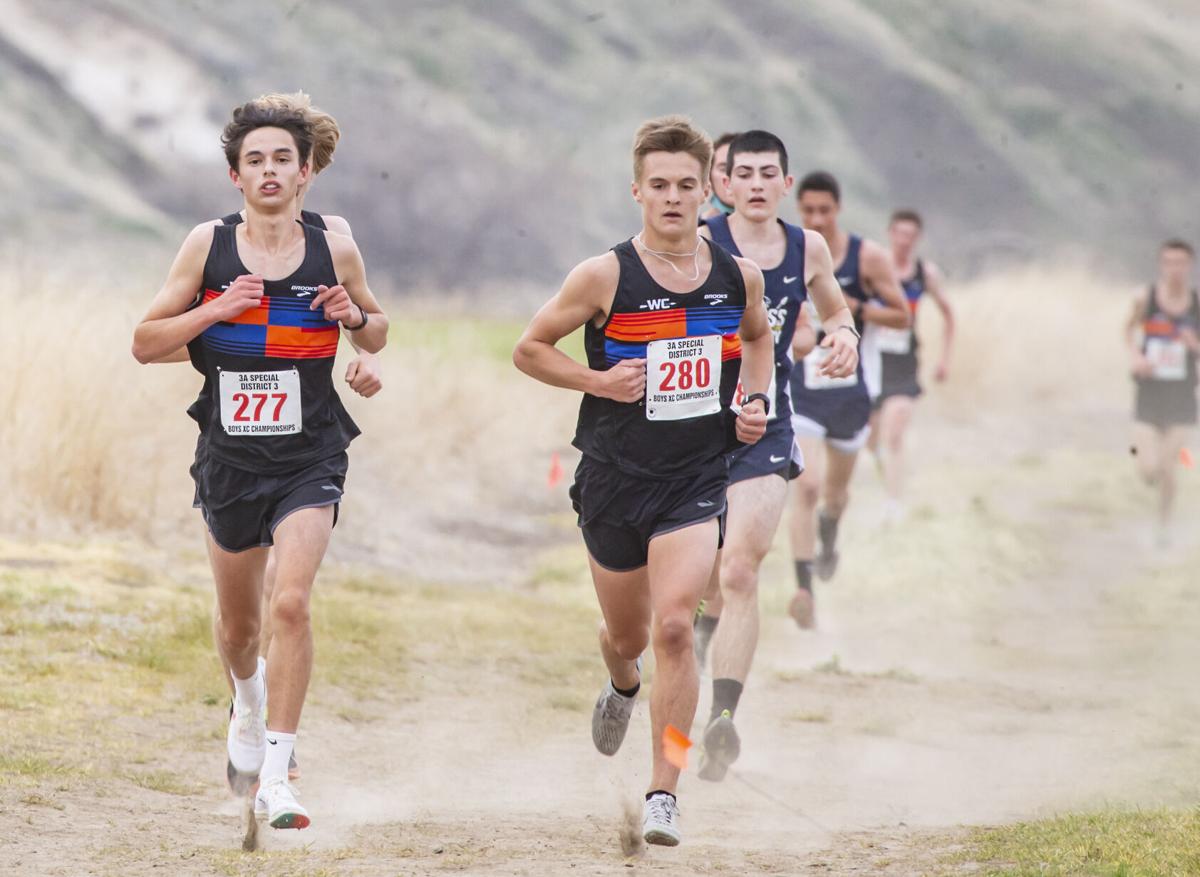 Wallowa Valley’s Henry Coughlan, left, and Zac Knapp lead the pack of runners in the boys 3A 5,000 meters at the 3A/2A/1A Special District 5 Spring XC Championship at Thompson Ranch in Heppner on Friday, April 2, 2021. Coughlan finished first with a time of 15.57.7, followed by Knapp in second with a time of 16:03.2. 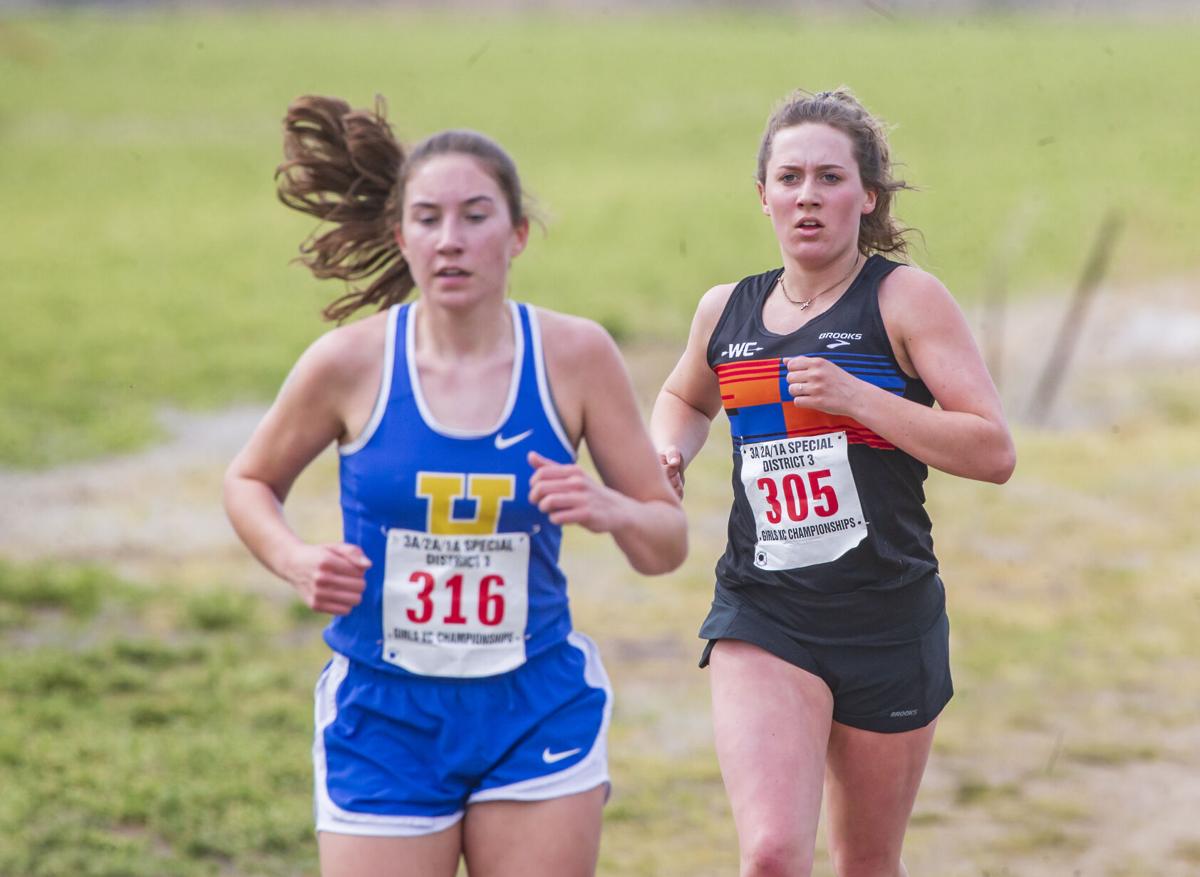 Wallowa Valley’s Henry Coughlan, left, and Zac Knapp lead the pack of runners in the boys 3A 5,000 meters at the 3A/2A/1A Special District 5 Spring XC Championship at Thompson Ranch in Heppner on Friday, April 2, 2021. Coughlan finished first with a time of 15.57.7, followed by Knapp in second with a time of 16:03.2.

HEPPNER — Wallowa Valley claimed the top three spots — and six of the top nine — to win the 3A division of the 3A/2A/1A Special District 5 cross-country championship Friday, April 2, in Heppner.

It was the first win in the first race of Season 2 for Coughlan, the reigning state champion in the classification. Coughlan had been in Florida and training there, head coach Dan Moody said.

“He had been down there visiting a friend and pretty much running on his own,” Moody said. “I’m sure they went on some long runs, but he trained on his own. I don’t worry about Henry not getting his running in.”

Three La Pine runners followed the Outlaw juniors, but that trio was followed by another Wallowa Valley set of three — Ian Goodrich, Brenden Moore and Weston Wolfe. Those three placed seventh through ninth. Goodrich finished with a time of 17:36.6. Moore followed in 18:04.1, and Wolfe timed in at 18:38.2.

“They had some good times. Our boys did what they needed to do,” Moody said.

Wallowa Valley and La Pine were the only teams in the 3A boys ranks in the district to field a full complement of runners, and finished with scores of 21 points and 36 points, respectively.

The Wallowa Valley girls fielded a full team of five for the first time this year, and took second in the 3A/2A/1A championship with 30 points, just behind Heppner, which won the district title with 25 points.

“We’ve had four girls all year, which has been unfortunate,” Moody said. “We got Maddie Nordtvedt back out ... It all worked out really good, and she rean a lot better than I expected — 23:02 for as little workout as she did on her own. I thought she had an exceptional day.”

The season concludes Saturday, April 10, with a de facto 3A/2A/1A state championship meet at Cheadle Lake Park in Lebanon. Given OSAA originally set up the Season 2 culminating week as local/regional, the title race is not an OSAA sanctioned event, though most of the top-rated teams in the state are slated to take part.

Wallowa Valley’s boys are the top-rated 3A team in a hypothetical meet, according to athletic.net, and have their top five runners all rated in the top 15. Knapp, Coughlan and Benton, are slated second through fourth, Goodrich is 12th, and Moore is 15th. The Outlaws far outkick La Pine and Westside Christian, who in the hypothetical meet tie for second but are 65 points behind Wallowa Valley (31 points).

You look at the kids times, they are not that far off or they did PR,” Moody said. “They are really close to their best run of their careers or they did break them. Ian and Brenden, they are really close to their PRs, and technically we’re in the middle of a cross-country season. I look for the kids to hopefully PR down at the state meet. And that’s included (for) the girls too. I think we’re sitting really good right now.”

The girls enter the upcoming state championship meet with three runners listed in the top 50 in the state at the 3A/2A/1A level — Hook currently ranks 26th, Iona McDonald is 40th and Nordtvedt is 47th. As a team, the Outlaws are ranked fourth in the state in a hypothetical meet, but Burns, a team ahead of the Outlaws, isn’t fielding a team, and Moody is optimistic that Enterprise could hang with Heppner for second.

“The girls have a really good shot at that, and I think they can come through,” he said. “Our girls have a great chance of bringing home some hardware.”