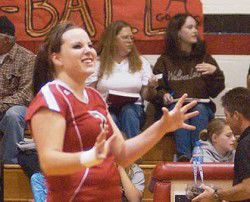 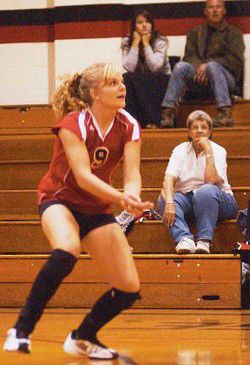 Volleyball match is decided in three gamesEnterprise junior Heather Bruce set up sophomore Joscelyn Stangel to deliver the nail in the coffin at their homecoming volleyball match against Pilot Rock on Friday. At that moment, play seemed to draw out in slow motion. Stangel jumped over the net, swung her right arm around in a circle and slammed the ball through any opponents who happened to be in the way.

Stangel's spike was her only kill of the match and was important. She won the third game, 25-17, and closed the match in favor of Enterprise. The Lady Outlaws took the first two games, 25-16, 25-16.

"We had some awesome kills: Bailee (Reimer's), Sarah (Butterfield's) and Joscelyn's," Theresa added, with a smile. "We played really well."

Bruce made 16 assists, spreading the ball around for her teammates to make the big finishes. Junior middle blocker Andrea Schaefer led with 7 kills and junior opposite Kayla Foster had 5. Reimer made 3, and Butterfield had 2.

"Andrea did an awesome job at the net," coach Amy Stangel said. "There were a lot of balls that forced her to make the best choice, as far as timing and passing, and she was great."

Playing hours before the homecoming football game, the Lady Outlaws started the night in style. They made short work of the Rockets, winning each game by wide margins.

Junior setter Tonya Neil's ace wrapped up the opener and set a tone for the rest of the match.

"The gym, tonight, was awesome ... all the people ... the band," coach Stangel said. "I want to thank the football players for supporting us. They had to get ready for their game at a certain time, but they were here for a while."

Counting the Outlaws' loss to Heppner in the second match of a doubleheader last Saturday, the Enterprise girls went through a string of difficulties for a while. However, they rebounded to finish with success against Pilot Rock.

"Things just happen; we can't let it affect us," Theresa said. "We were excited that it was homecoming, so we played really well. We're the kind of team that can get in this groove were everything seems to go right."

On this past Tuesday, the Outlaws hosted Wallowa. That was scheduled too late to be included in this edition in the Chieftain.

The next Enterprise volleyball match will be at Elgin, with the action starting at 3 p.m.