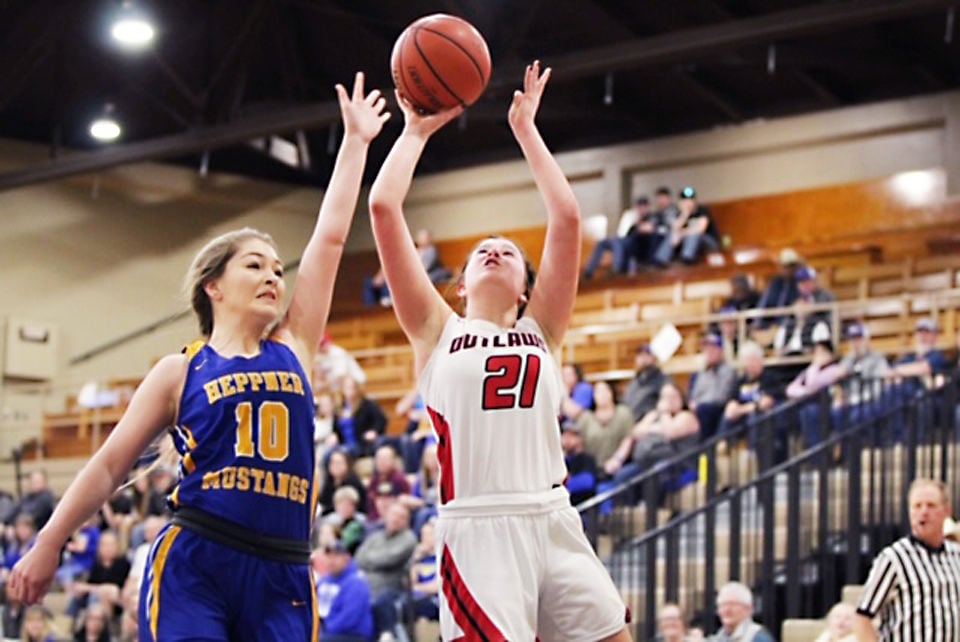 Outlaw Carsyn Miller shoots for two of her team-leading10 points over Heppner’s ZaBrena Masterson in the Outlaw’s win vs the Mustangs. 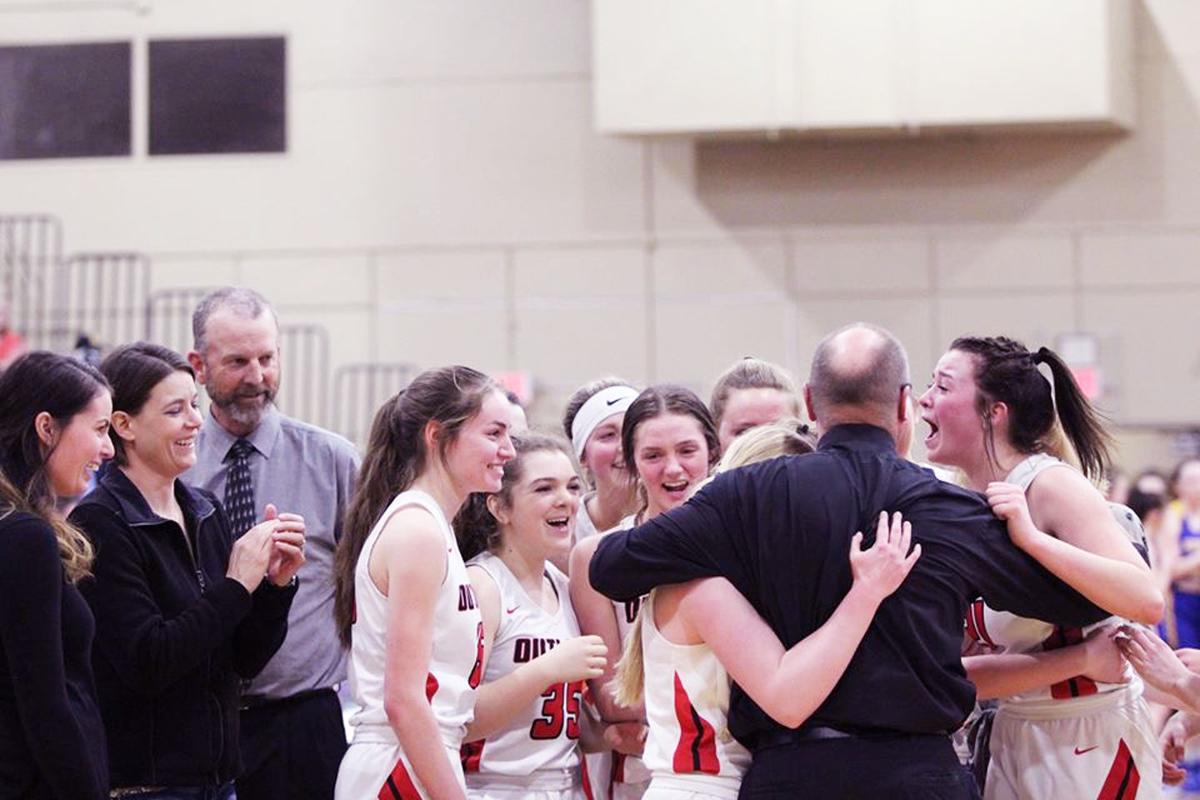 Coaches and players are all smiles after the Outlaw’s victory. 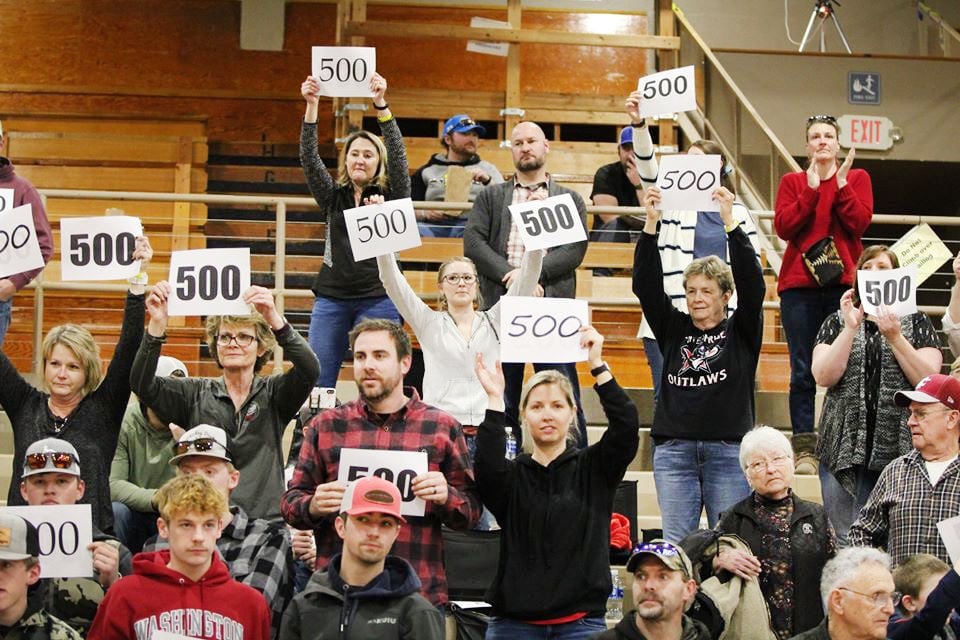 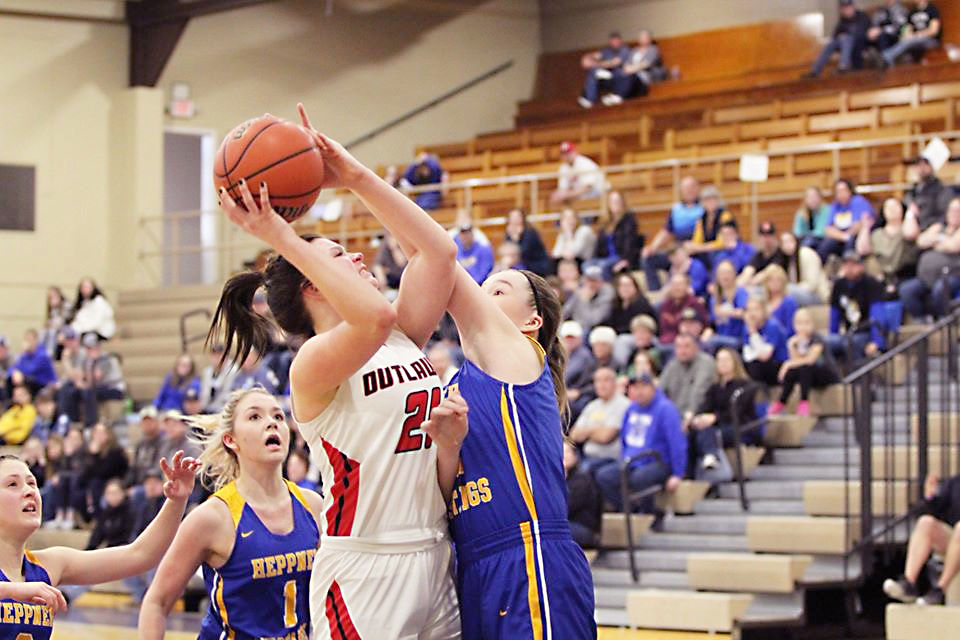 Outlaw Carsyn Miller eyes the basket under aggressive defense by the Mustangs.

Outlaw Carsyn Miller shoots for two of her team-leading10 points over Heppner’s ZaBrena Masterson in the Outlaw’s win vs the Mustangs.

Coaches and players are all smiles after the Outlaw’s victory.

Outlaw Carsyn Miller eyes the basket under aggressive defense by the Mustangs.

The Enterprise Outlaw girls took it to the limit on Saturday Feb. 22, earning a spot in the state 2A basketball tourney with thrilling 2-point OT win against the Heppner Mustangs, 40-38.

The win also notched Coach Mike Crawford’s 500th win and secured third place in the conference — and play in the state tournament.

The Outlaws struggled early in the game, shooting just 11.5 percent in the first half. At halftime they trailed 16-8.

But what’s a piddly 8-point deficit when you’re the comeback kids? The second half saw an Outlaws rally, shooting for 47.8% from the floor. They led late in the game. But despite Enterprises best efforts on defense, the Mustangs kicked into action and tied the game in the last seconds of regulation. The score was 33-33. IN the four minute OT, the Outlaws buckled down, outscoring the Mustangs 7-5 in the OT period for a well-earned and exciting victory.

Carsyn Miller scored in double digits with 10 through the hoop, while Ashlyn Gray scored nine and seized a holy-smoke total of 14 boards. Jada Gray sank eight points with 80% floor shooting.

“We’re happy to be moving forward,” the coach said.

Crawford noted that although the Outlaws held down the ninth spot in final state rankings, they ended up with the No. 11 slot because of the way districts works. They face sixth-seeded Monroe on Friday, Feb. 28 at Monroe.

“If we win that game, we’re off to the final eight,” Crawford said. “If we don’t, we finish where we finish.”

Crawford is not worried.

They’re a comparable team to us,” he said. “It’s somebody we don’t know and they don’t know us, and that’s what the playoffs are about.”

The Outlaw’s Saturday victory was especially sweet because they had dropped their friday night game to the Stanifled Tigers, 41-28. Coach Mike Crawford said it wasn’t one of the Outlaws’ better games.

“If you only shoot 27% from the game, that is just not going to cut it,” he said. “Too many turnovers, just too many things you can’t do in a game like that.”

Jada Gray led the scoring with six points. Several others contributed four each. Rylin Kirkland had a total of with seven rebounds and four steals or turnovers while senior Gracie Niezen nabbed five.