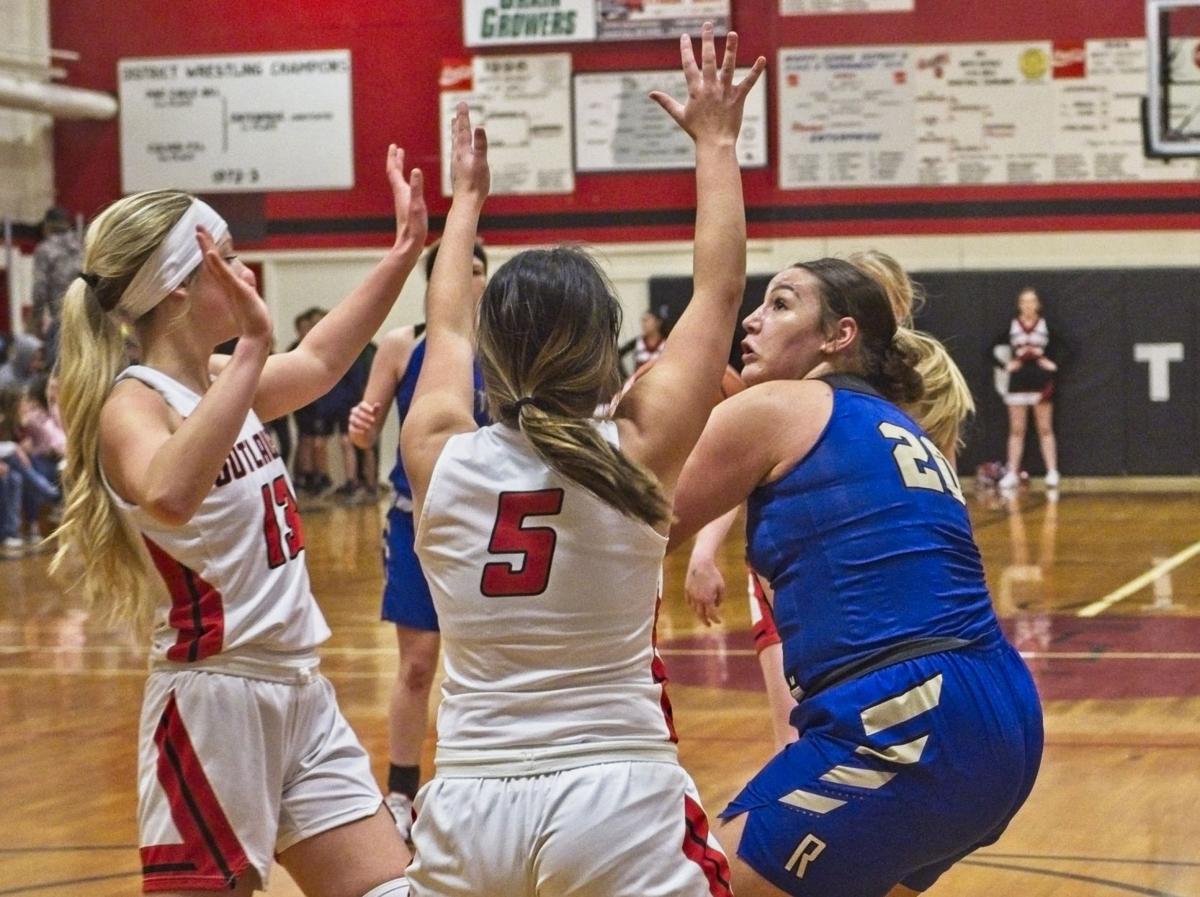 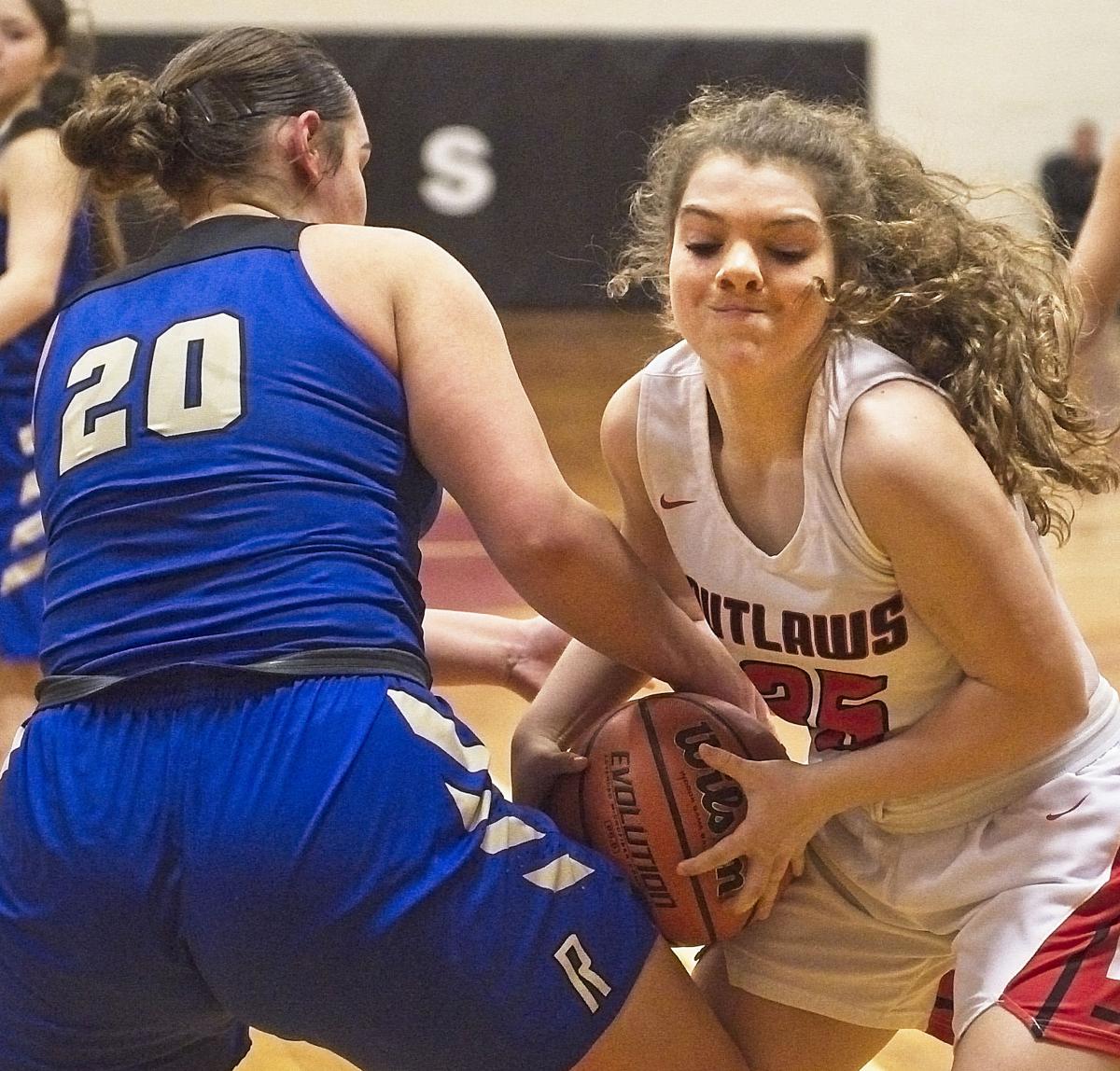 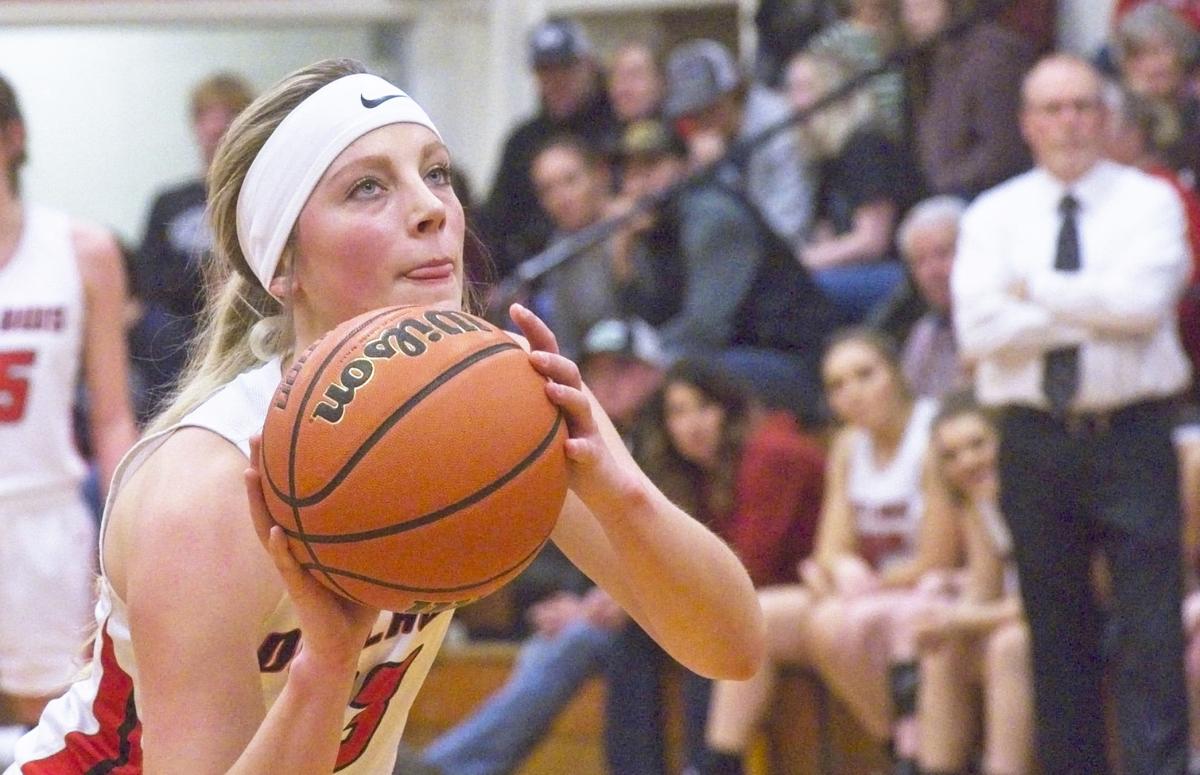 Enterprise’s Ashlyn Gray takes a bead on the basket for a foul shot. 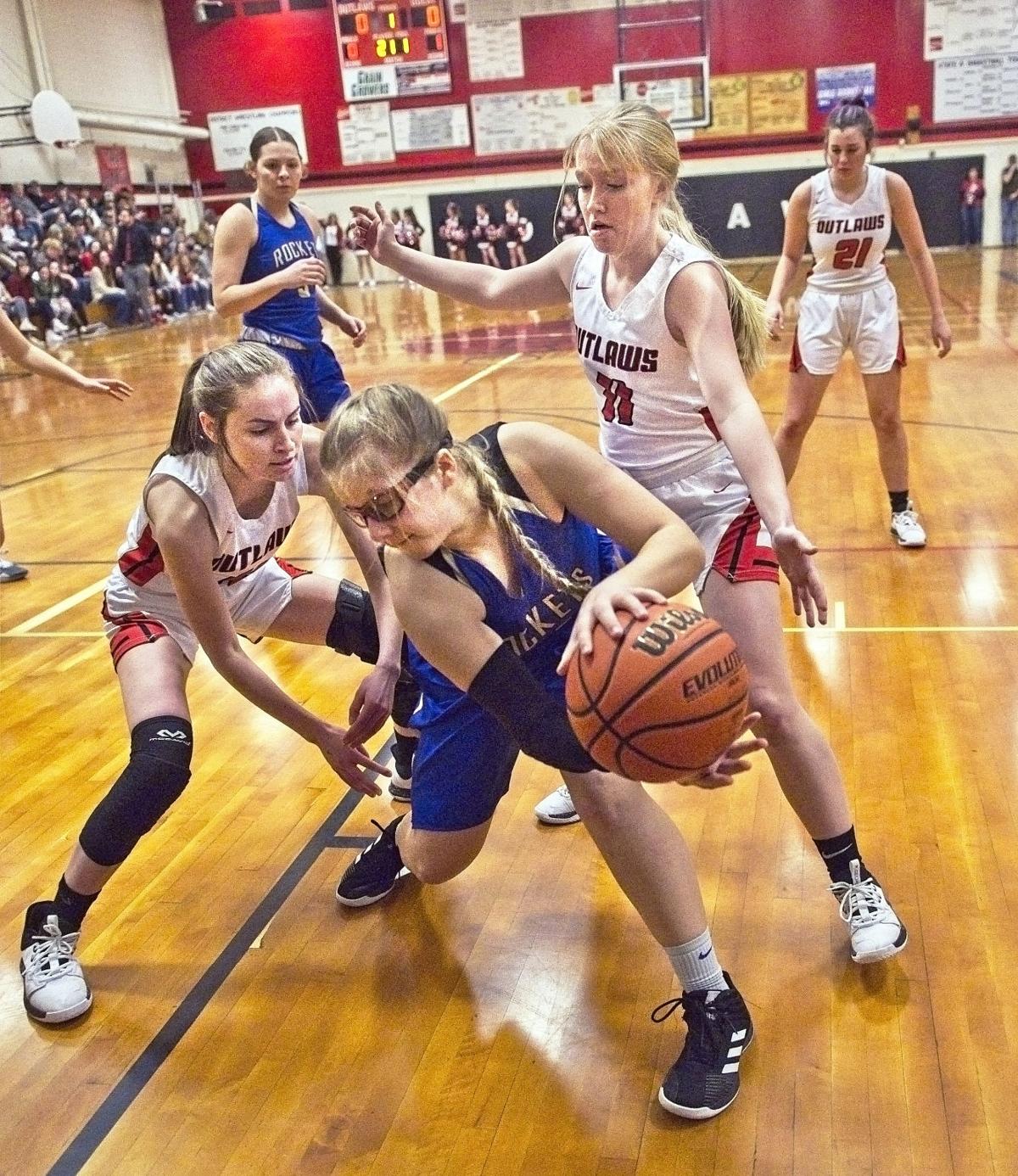 Trapped! Pilot Rock’s Madison Lunzman looks to pass her way out of a trap by Enterprise’s Gracie Niezen and Claire Farwell at the start of the game. 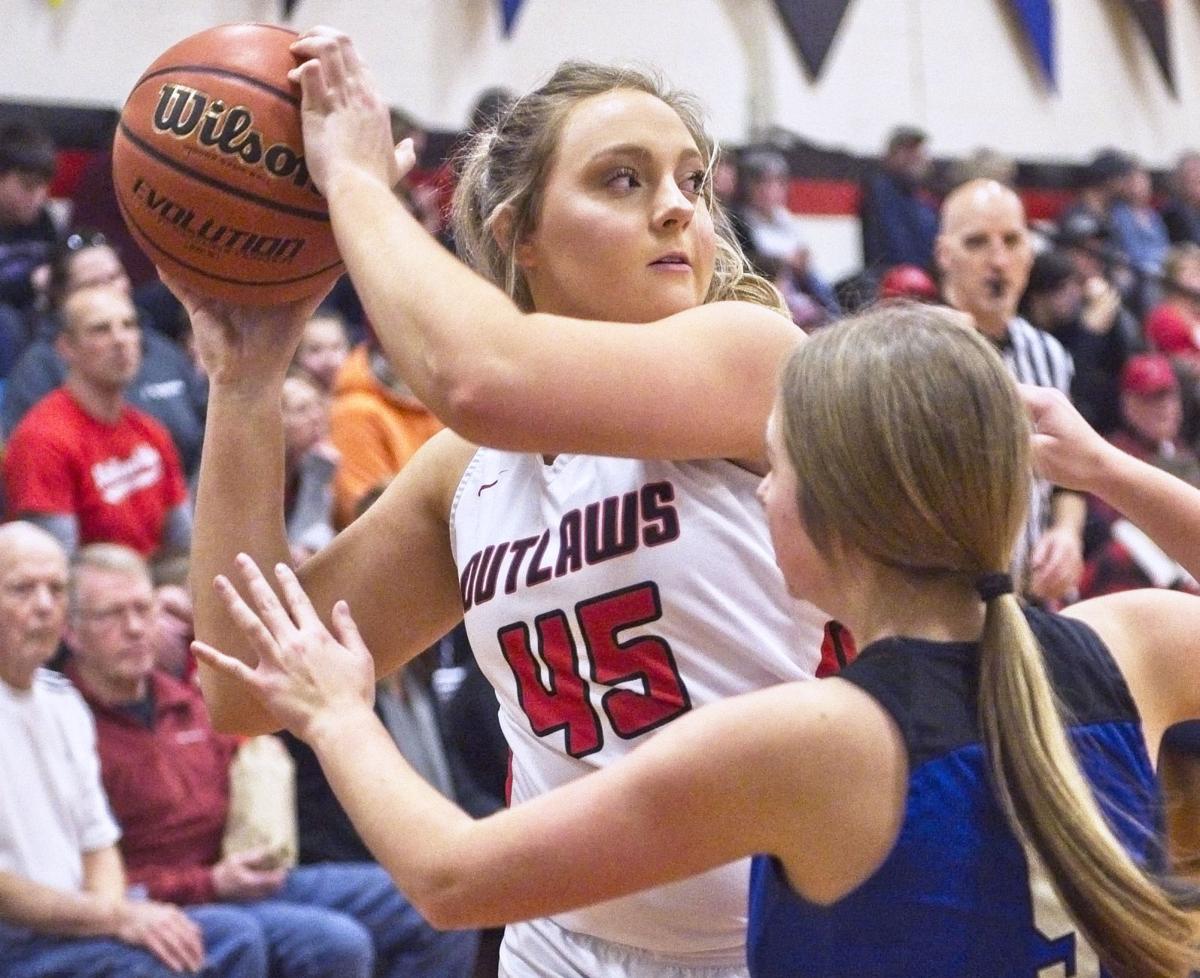 Outlaw Casidee Harrod, in a trap along the sidelines, looks for a teammate to pass the ball to.

Enterprise’s Ashlyn Gray takes a bead on the basket for a foul shot.

Trapped! Pilot Rock’s Madison Lunzman looks to pass her way out of a trap by Enterprise’s Gracie Niezen and Claire Farwell at the start of the game.

Outlaw Casidee Harrod, in a trap along the sidelines, looks for a teammate to pass the ball to.

Friday, Jan. 3, saw the Pilot Rock Rockets visiting the Enterprise lady Outlaws, and going down in flames 55-22. The Outlaws were on fire from the word go. The defense allowed the fizzling Rockets only two points in the first quarter and remained miserly the rest of the battle.

The offense secured the victory by shooting a sterling 43% from the field. Jada Gray and Zari Bathke played patty-cake with 12 points each and led the balanced scoring attack. Gray also had six thefts on defense. Rylin Kirkland chipped in with nine while Ashlyn Gray knocked with seven and raked in nine boards on the evening.

A quick turnaround found the ladies at Grant Union shooting the Prospector defense full of holes with a quick 43-24 victory for their ninth straight win that never saw the Prospectors posing a serious threat.

Zari Bathke served as lead shooter for the Outlaws, scoring 18 against the helpless Prospectors, shooting an amazing 67% from the field. Carsyn Miller stood next in line with seven points on the board and Claire Farwell added six.

Defensively, Ashlyn Gray hauled in seven boards and somehow avoided arrest after 10 steals on the night while Miller pulled in a half-dozen boards.

“It’s nice to go over and win there because it’s something we haven’t done for awhile,” coach Mike Crawford said. “We’re hanging in there.”

He said that after the ladies meet Weston-McEwen on Friday, Jan. 10, the squad will face some of the toughest teams in the league the following week with back to back games versus Heppner and Stanfield.

“We’ll find out what we’re made of and what the league’s made of when we go play them,” Crawford said. “This is the best start we’ve had in a long time — no doubt.”

The coach said the ladies have a particularly strong defense this year, which is key to their success. He also noted that upcoming teams are scoring more points than the Outlaws, but also allowing opponents to score more points. He expects the ladies will also hold their main competition to low scoring, which will make them a formidable opponent.

“I know we’re going to be a tough team to beat,” he said. “That being said, we have to go through each of those games and they’re going to be good ones.”

The week left the Outlaws with a 2-0 league record and 10-1 overall. They co-occupy the first slot in the Blue Mountain Conference with Stanfield and are ranked fourth in State 2A ball.