<I>Hector del Castillo/Chieftain</I><BR>Junior tail back Marcus Lynn takes a pass in the fourth quarter and maneuvers toward the Heppner sideline as the Outlaws make a drive. 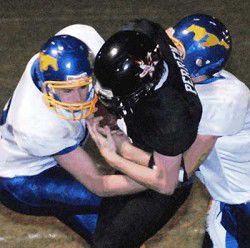 <I>Hector del Castillo/Chieftain</I><BR>Junior tail back Marcus Lynn takes a pass in the fourth quarter and maneuvers toward the Heppner sideline as the Outlaws make a drive.

Enterprise High School's football team really scared Heppner, the perennial powerhouse of the Blue Mountain Conference. Before this season - the Outlaws having transformed themselves into a fast, strong and confident bunch - Enterprise had always fallen victim to Heppner by lopsided margins. But everything changed Sept. 24 at Ortman Field in Enterprise. Late in the fourth quarter, the visiting Mustangs stopped playing aggressively and instead they simply defended a slim lead of 20-14. When the scoreboard clock finally expired, the Mustangs escaped home with another victory while the Outlaws gained an immeasurable amount of pride.

"We were flying around, hitting hard," said Enterprise junior running back Marcus Lynn, who totaled 106 yards on just six carries and scored both of his team's touchdowns. "We didn't have the same mentality we had last year, already thinking we'd get beat. This time, everybody was pumped up. We were all jacked. Heppner came out hard. We played our hearts out, that's for sure."

The loss dropped the Outlaws' overall record to 2-1. Ten days earlier at home, Enterprise defeated La Grande's junior varsity by a score of 33-14. The Mustangs also started the Outlaws at 0-1 in the league.

The Outlaws forced five turnovers before halftime. Despite butterfingers, Heppner took a 6-0 lead in the second quarter after tailback Alex Pickles managed a three-yard run to the end zone. In search of more, the Mustangs drove into Enterprise territory but Hayes recovered another fumble at the 19-yard line. The Outlaws capitalized. Lynn eluded tacklers and outraced them 74 yards for a touchdown. Junior Erich Roepke tacked on an extra point, putting Enterprise ahead of the defending league champion. Heppner quickly tried to answer, but senior defensive back Matt Perren intercepted the Mustangs' pass to the goal line.

Following the break, Heppner secured its grip on the ball but Enterprise kept charging. The Mustangs regained an advantage in the third quarter, when quarterback Cam Day scrambled 17 yards to pay dirt. Looking two more points, he hit Pickles with a throw. Then, Galletly responded with a seven-yard scoring pass to Lynn. Galletly ended up completing 6 of 12 passes for 67 yards. Roepke's kick drew the game even at 14-14.

In the fourth quarter, Pickles went up the middle and squeezed through his line of blockers for another touchdown and the deciding score.

Next, the Outlaws will travel to Boardman for an Oct. 1 game at Riverside High.