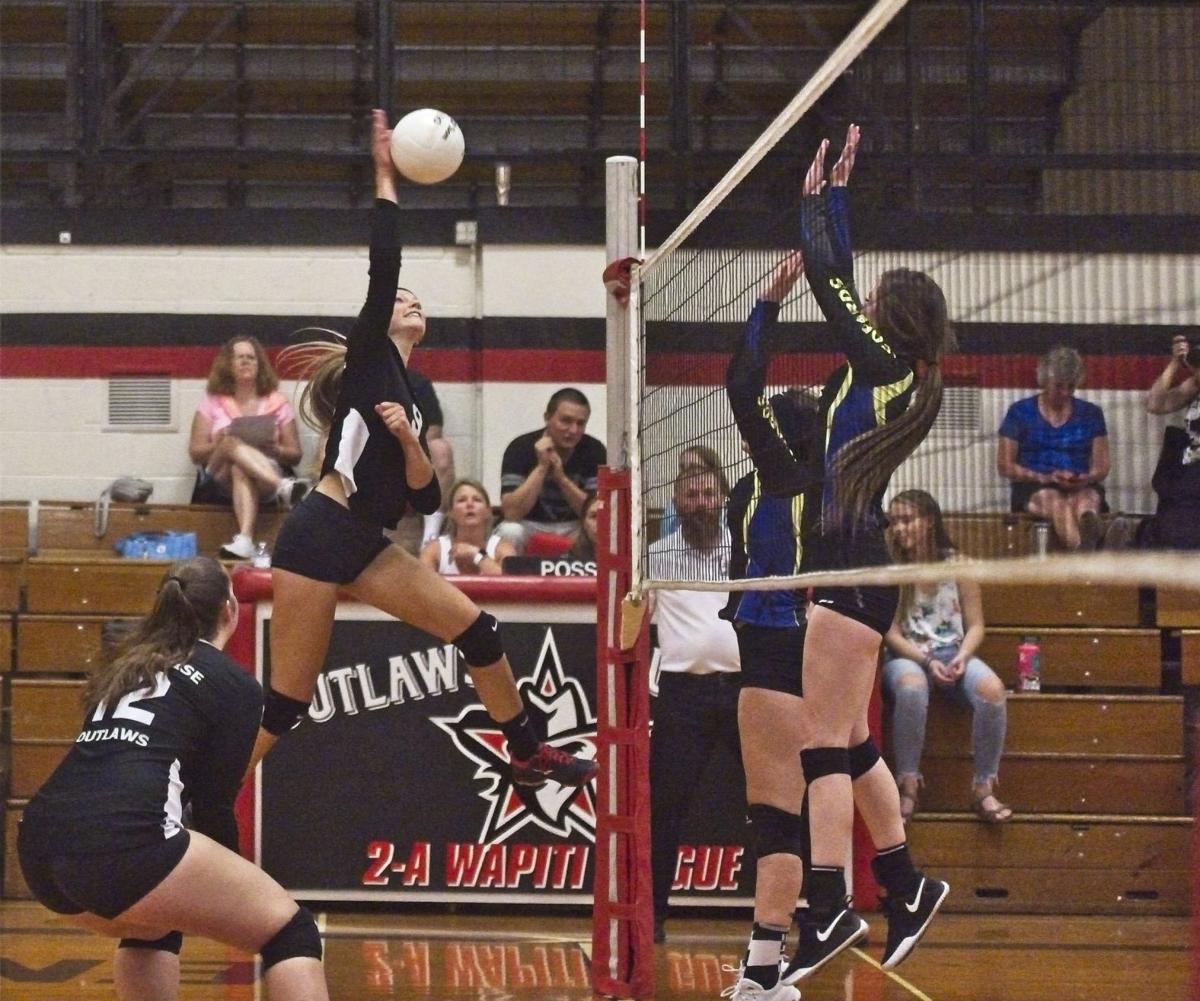 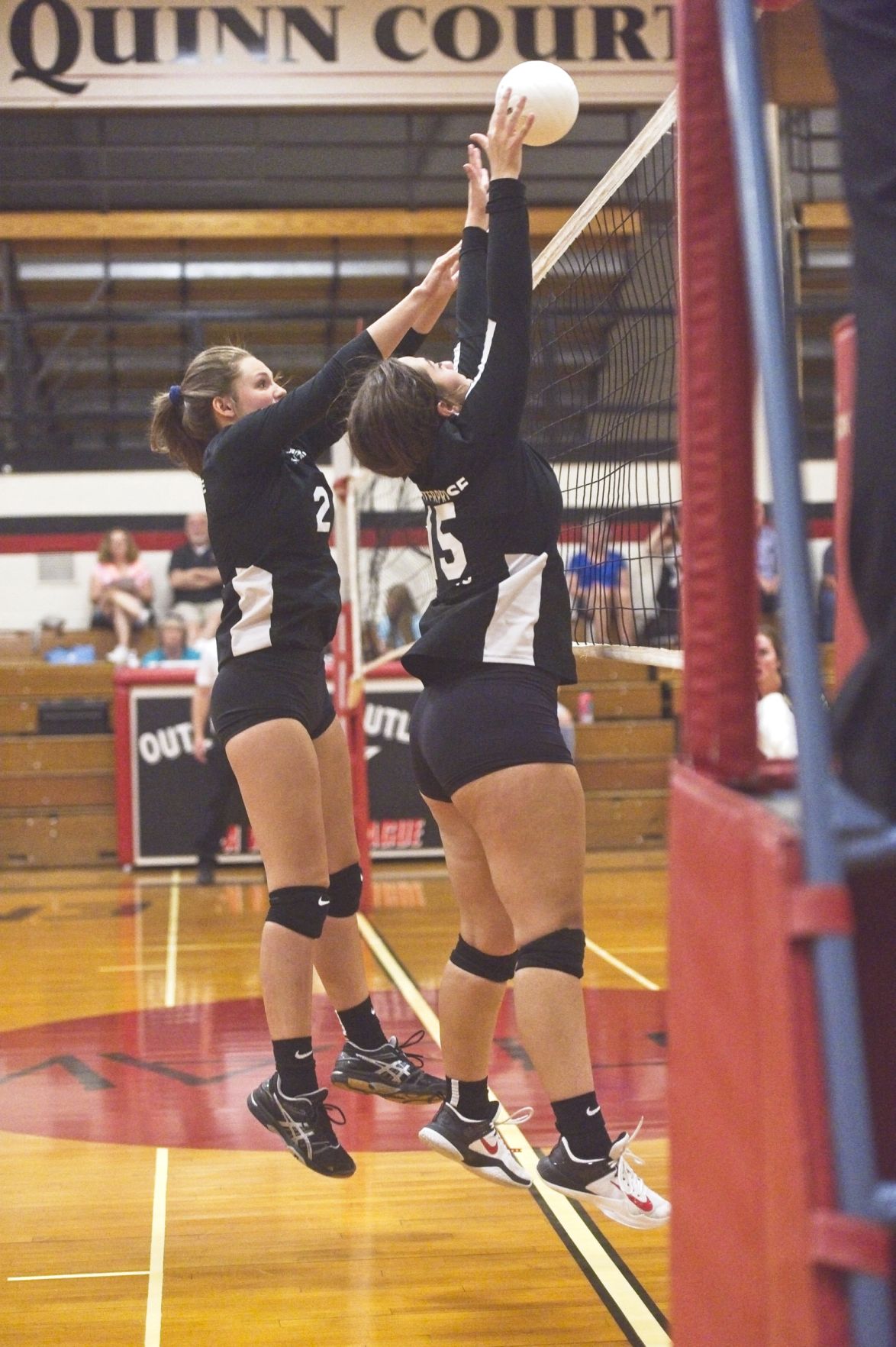 Rilyn Kirkland tips the ball back over the net where Cove defenders can’t get it.

Rilyn Kirkland tips the ball back over the net where Cove defenders can’t get it.

The lady Outlaws just keep getting better on the court as the training regimen of coach Lisa Farwell takes hold. The Outlaws played several matches over the last week, starting in Helix on Tuesday, Sept. 3.

The ladies first faced Irrigon, then Weston, in pool play, losing both sets by scores of 19-25 and 13-25 respectively. The Outlaws followed with a 25-11 pool play victory over Helix, followed by twin victories over the host in bracket play, 25-21 and 25-15.

Coach Farwell said she was happy to see improvement in team communication, but the ladies’ struggles at the net continued.

“We missed too many blocks and turned the ball over with hitting errors,” she said. “I’m hoping to see our net play improve dramatically.”

Highlights included Claire Farwell, who scooped for 19 digs while monster Ashlyn Gray had 13 kills. Zari Bathke turned in a solid offensive performance with 18 for 19 serving with three aces.

Coach Farwell said that the ladies folded in the third set, coming off the momentum swing towards Cove late in the second set.

“We need to improve our discipline, and eliminate the mental mistakes if we want to keep the momentum throughout the entire match,” she said.

The Outlaws followed their hectic schedule with a trip down to Prairie City for that school’s invitational tournament on Saturday, Sept. 7. The ladies first lost a hard-fought match to Redmond, 20-25 and 23-25 before teeing off on Harper 25-13 and 25-8. Dayville/Monument fell victim to the Outlaws, 25-12 and 25-14, allowing the ladies to advance to bracket play.

The Outlaws are now 5-4 overall and next play at Cove on Friday, Sept. 20.

The Outlaws first took on Condon/Wheeler, sending them away reeling, 25-7 and 25-10. The Outlaws next faced their hosts, losing a 27-25 heart-stopper and lost the next, 25-15. Despite the final two losses, Coach Farwell had many kudos for the ladies.

Farwell noted that Zari Bathke stepped up as a middle blocker, contributing 11 blocks for points and a lot of smart plays at the net. Kill machine Ashlyn Gray’s hitting was consistent and smart with count-em, 36 kills. Farwell also noted Rilyn Kirkland is gaining confidence as a setter and had 35 assists.

The coach had a number of laudatory comments about the team’s play. She said the ladies played well against hard-hitting Redmond in the first two sets, and kept that level of play going throughout the rest of the day. In the last match, Prairie City hit well and made very few mistakes and the Outlaws couldn’t string enough points together to come up with the win.

“The 10-set day was marked by improvement across the board from last week — stronger net play with both attacks and blocks, better serving, better defense,” she said. “This is what preseason is for — lots of volleyball and lots of improvement.”