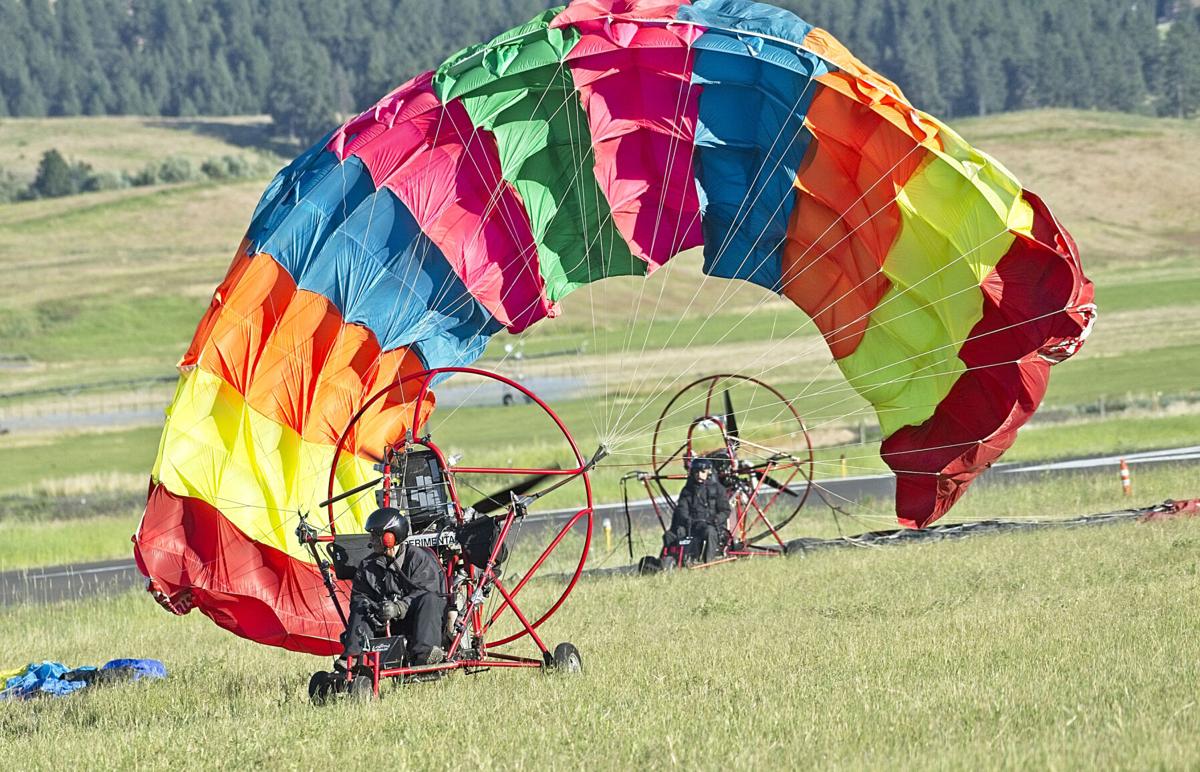 Jim Payne’s parachute begins to open as he starts to gain speed on the grassy runway. 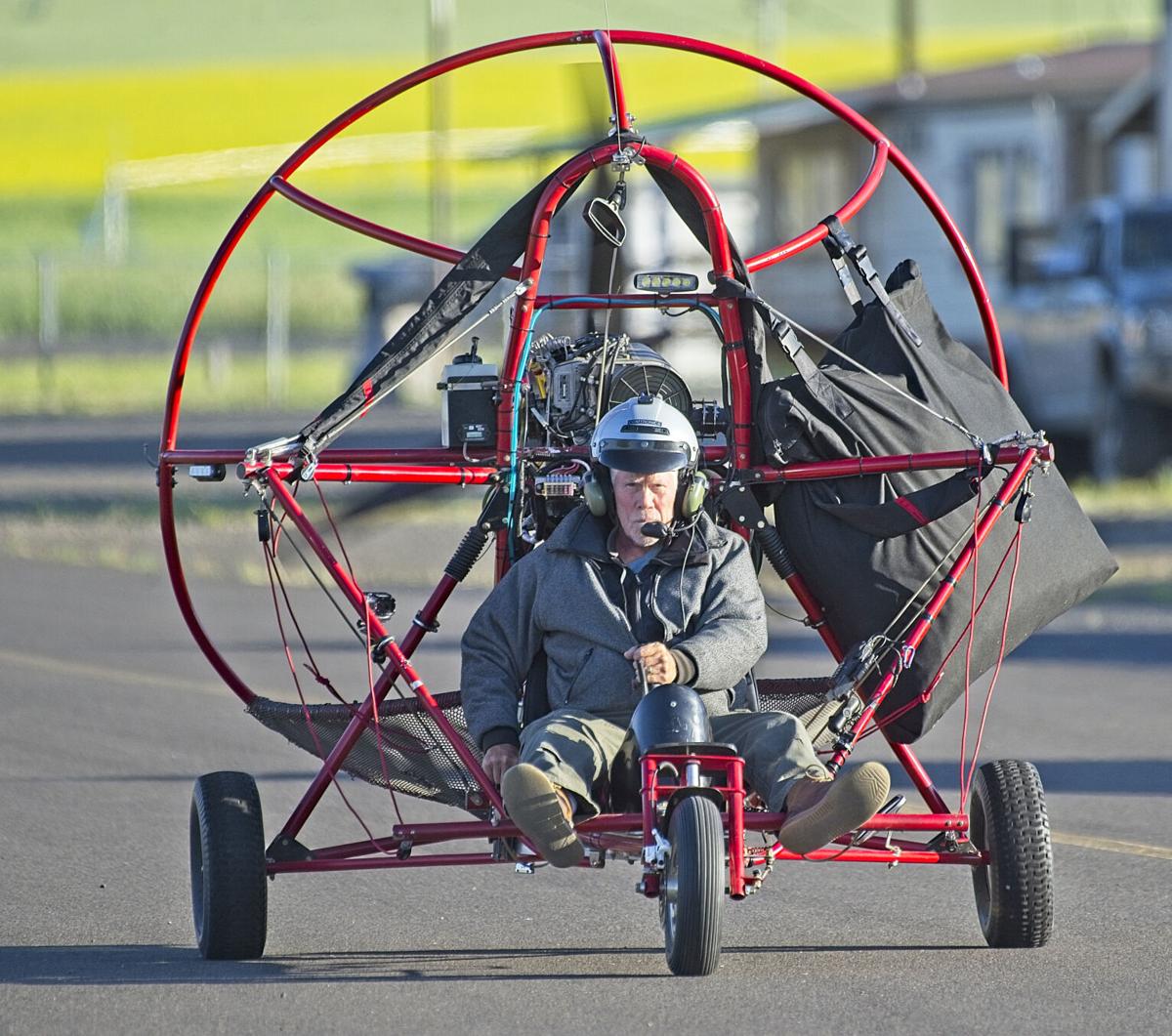 A paraplane pilot taxies up the runway toward the grass runway that will be used to take off and land. 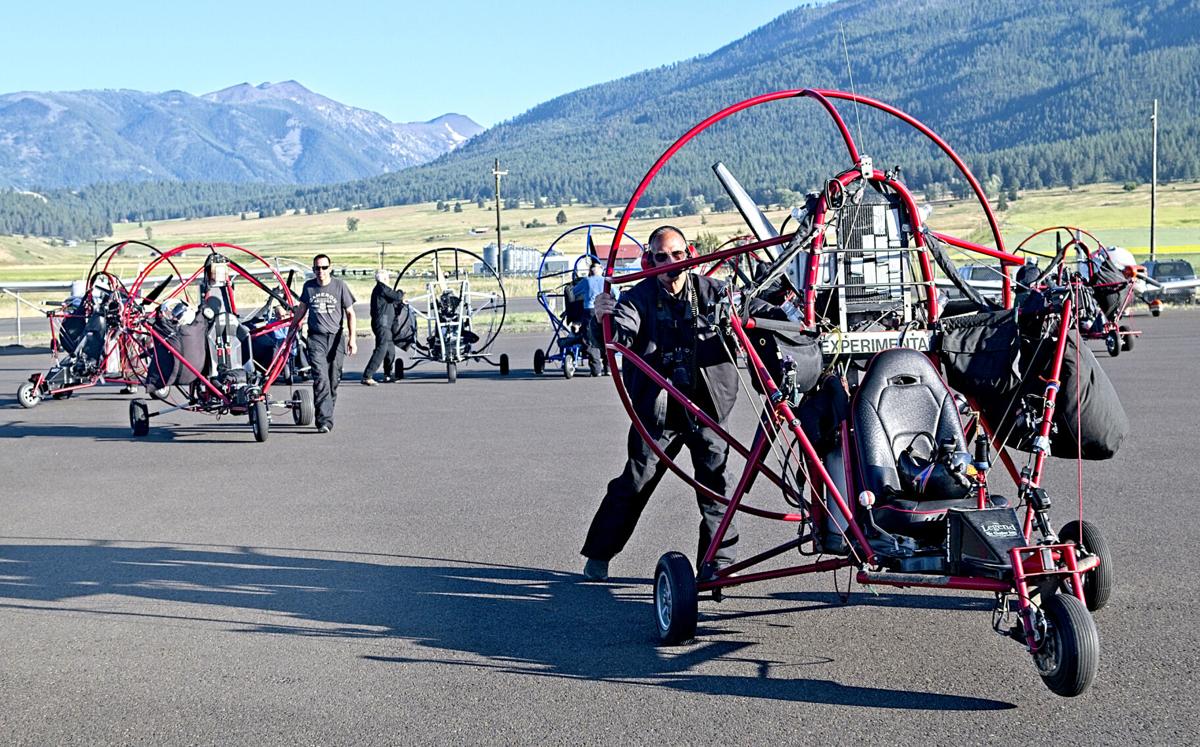 Jim Payne, right, pushes his paraplane toward the grass runway for final inspection and take off. 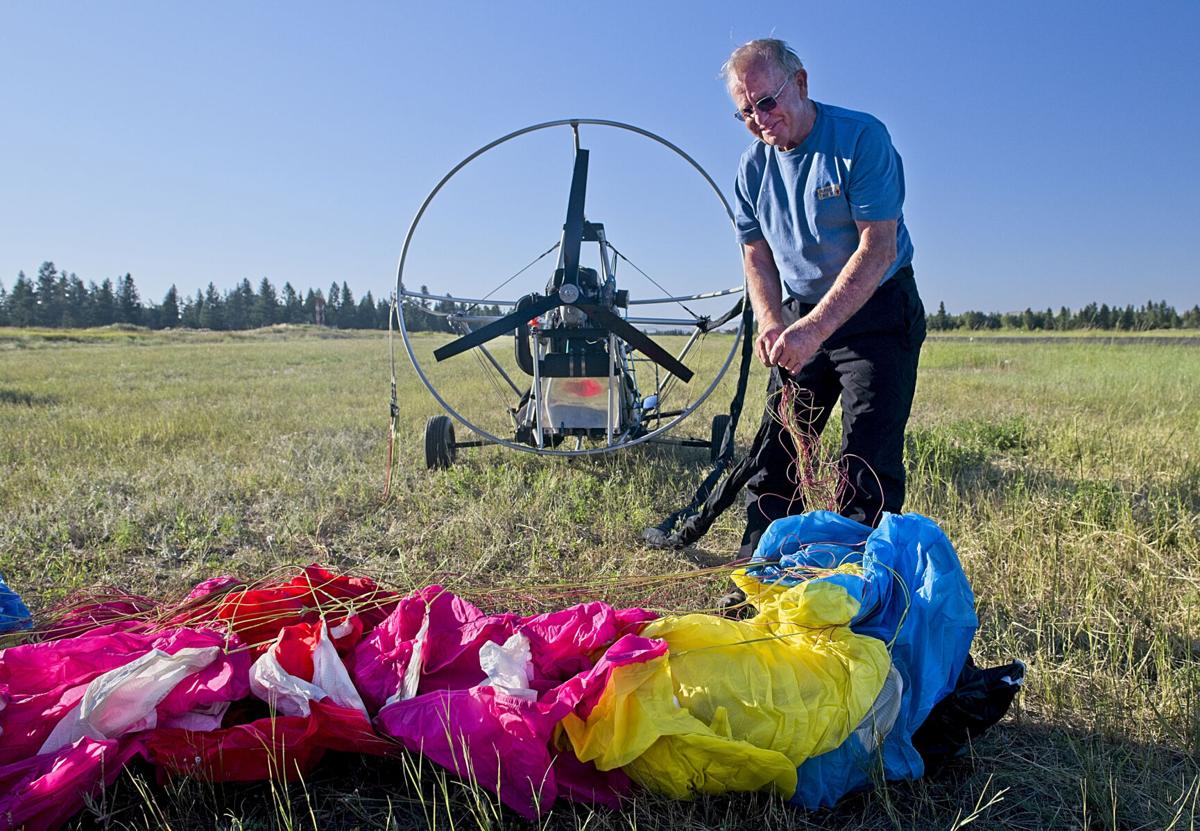 Dan Sanders lays out his parachute and begins to check to make sure all the lines are untangled. 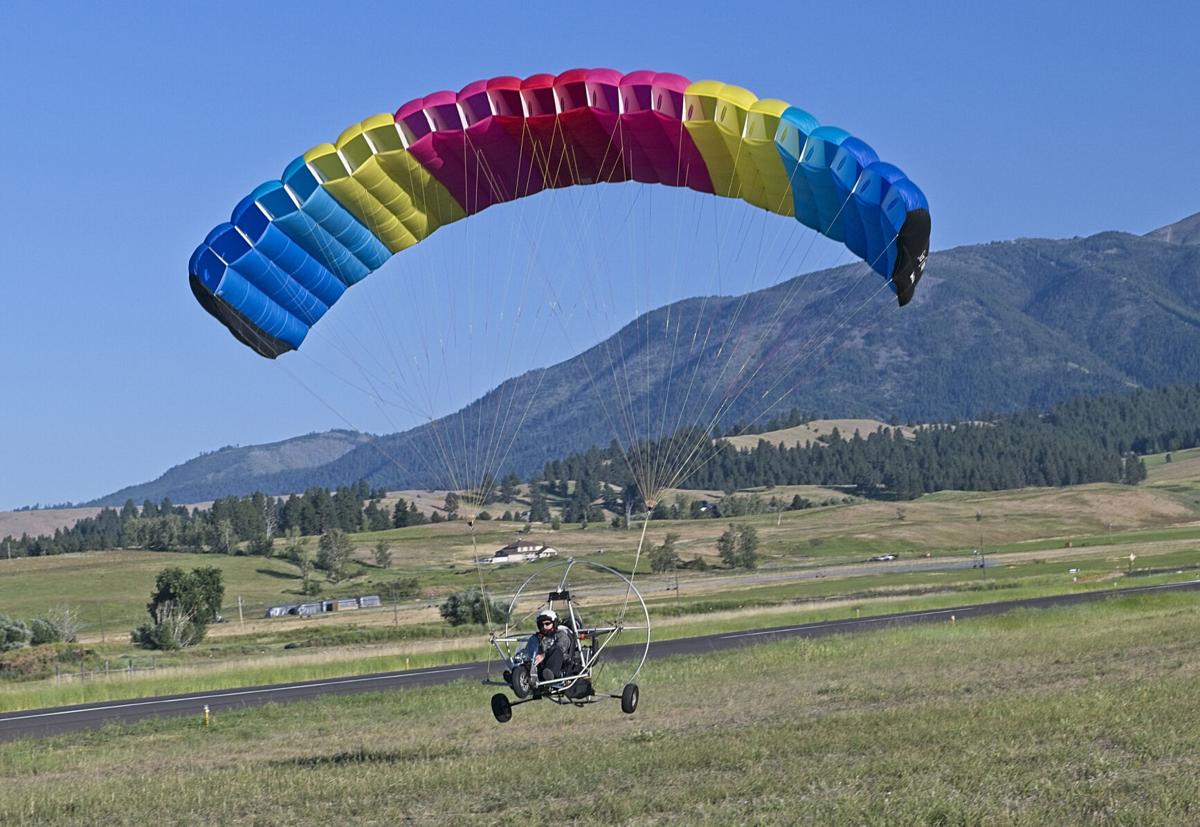 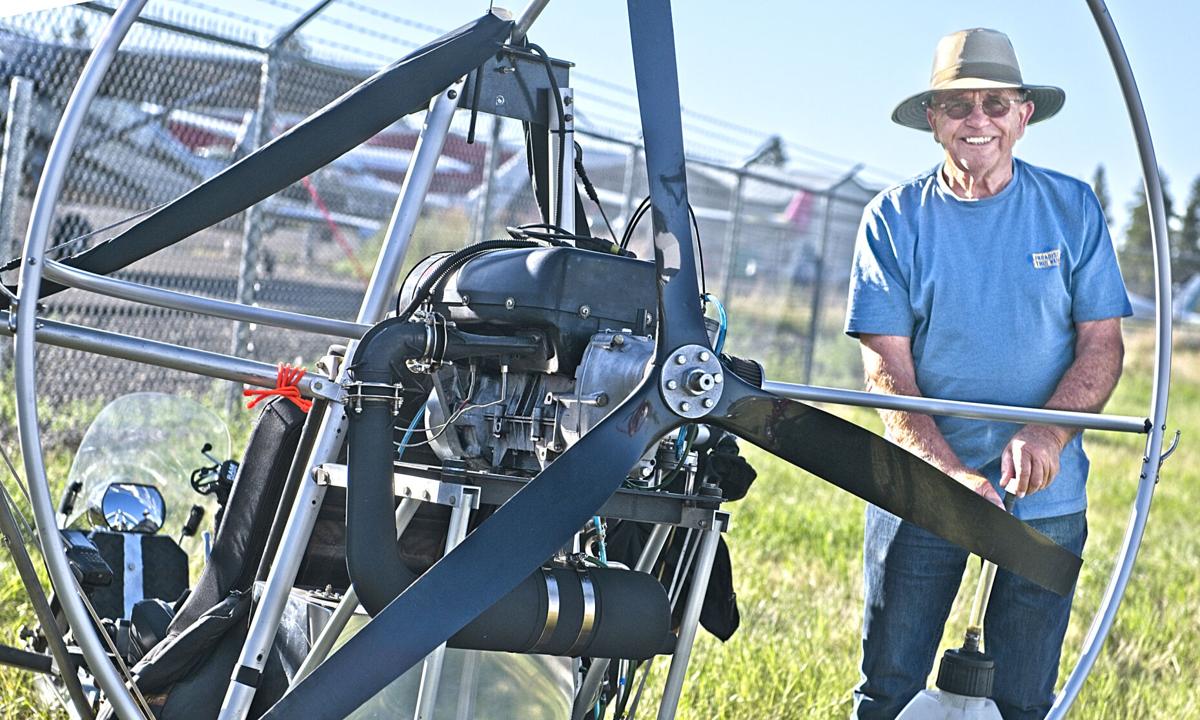 Dan Sanders and the business end of his 55 horsepower, single-seater paraplane.

Jim Payne’s parachute begins to open as he starts to gain speed on the grassy runway.

A paraplane pilot taxies up the runway toward the grass runway that will be used to take off and land.

Jim Payne, right, pushes his paraplane toward the grass runway for final inspection and take off.

Dan Sanders lays out his parachute and begins to check to make sure all the lines are untangled.

Dan Sanders and the business end of his 55 horsepower, single-seater paraplane.

JOSEPH — There may not have been a rodeo in Harley Tucker Arena this weekend, but that didn’t stop people from flocking to Joseph for fun.

They include a group of nine friends who are powered parachute pilots. They gather at the Joseph State Airport during Chief Joseph Days. This year, they said, was the first time anyone noticed them. Coming to Wallowa County from Tri-Cities and Republic, Wash., Milton-Freewater, Pendleton, Hermiston and Milwaukee Ore., they have no club or official name.

All love to fly what one termed “flying armchairs.” The contraptions are also known as motorized parachutes or paraplanes.

“You fly at about 30 mph,” said Jim Payne, a powered parachute pilot and instructor from the Tri-Cities. “You get to see a lot of scenery and wildlife. I’ve had eagles fly up, check me out and follow me.”

Payne likes to fly relatively low — at altitudes of a few hundred feet or less so he can see things. He usually takes his camera with a 28-300mm lens to capture scenery as well as the birds that adopt him as a flying companion.

The single-passenger flying armchairs have 50- to 60-horsepower engines that turn a large (4- to 5-foot-diameter) propeller located behind the pilot. There are also two-seaters with larger 65-horsepower engines.

Single-engine paraplanes have fuel tanks that hold only 5 gallons of gas, giving them a range of about 60 miles on a calm day, Payne said. Paraplanes are by far the cheapest and safest way to fly.

“Should your engine quit for any reason, you can just land using the parachute. You don’t come into the ground very fast and usually it takes about 50 feet to come to a stop,” he said. “But it’s always best if you only fly over places where you can safely land.”

Piloting a power parachute is easy, with only two controls to worry about, said Dan Sanders, also from the Tri-Cities. You climb or descend using the throttle and steer with rudder pedals. For flying a single-seater there is no pilot’s license needed and no FAA registration of the plane. Things get a bit more complicated for the more powerful two-seaters.

There’s no question that powered parachutes are noisy, Payne said. But when you are piloting one, you are wearing headphones, are in contact with other aircraft over a radio and don’t notice the sound. However, people on the ground sometimes complain, so this group of pilots try to fly over areas that are sparsely populated.

The group flew their paraplanes twice on Saturday, July 25. On the morning flights, some headed for a view of the Imnaha Canyon, and others explored the Wallowa Valley’s landscapes. But winds had the group unsure about making an evening flight.

It’s easiest to lift off by taking off directly into the wind, and the evening breeze was blowing from west to east. But by 6:30 p.m., the wind had shifted to the northwest, so the group rolled their planes to the grassy runway at the north end of Joseph’s airport, carefully unpacked the colorful parachutes, laid them out behind the paraplanes and ensured that the lines were not snarled.

The group then started the engines of their paraplanes and they headed down the runway. As they picked up speed, the ram-air parachutes lifted into the air, and so did each little plane and its pilot. They were all headed for an hour of airborne bliss over the Zumwalt Prairie, the Imnaha Canyon and the Wallowas.