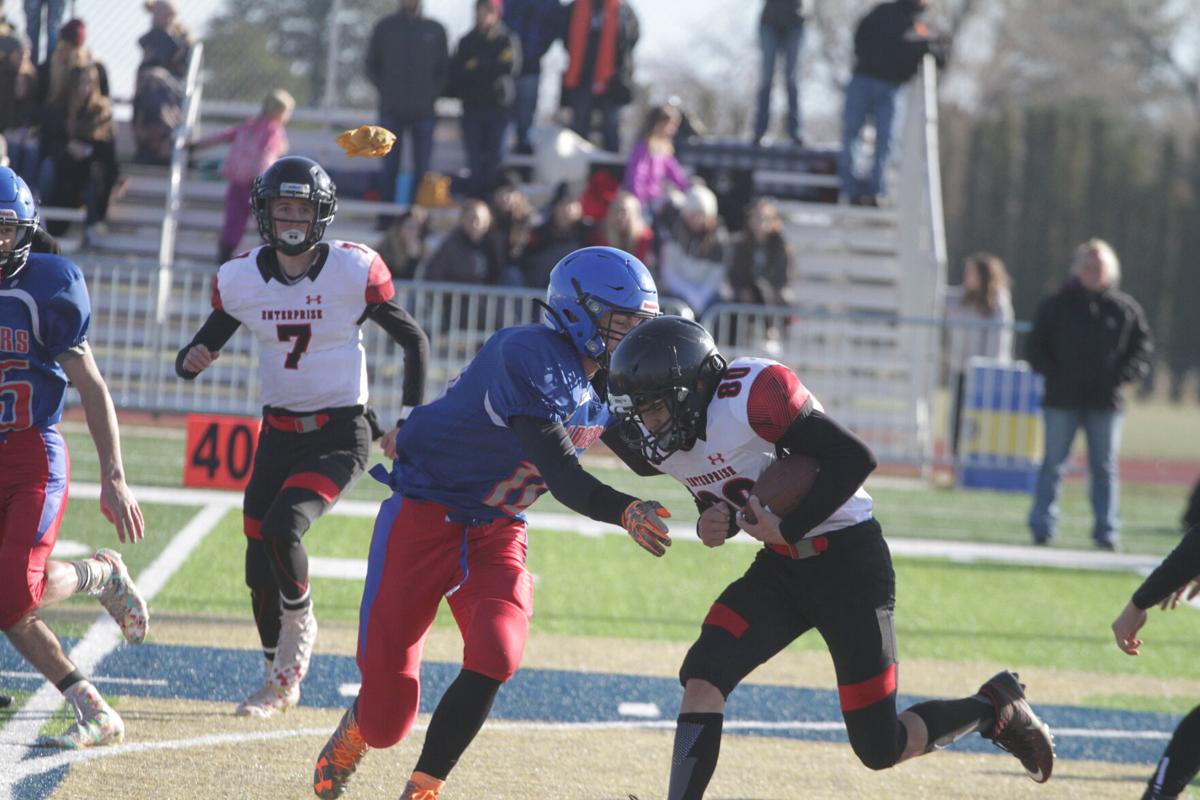 Powder Valley and Enterprise are among the eight regional schools that have a plan for a 5-on-5 football season, a volleyball season and potentially a handful of cross-country meets as part of their approach to OSAA’s Season 1. 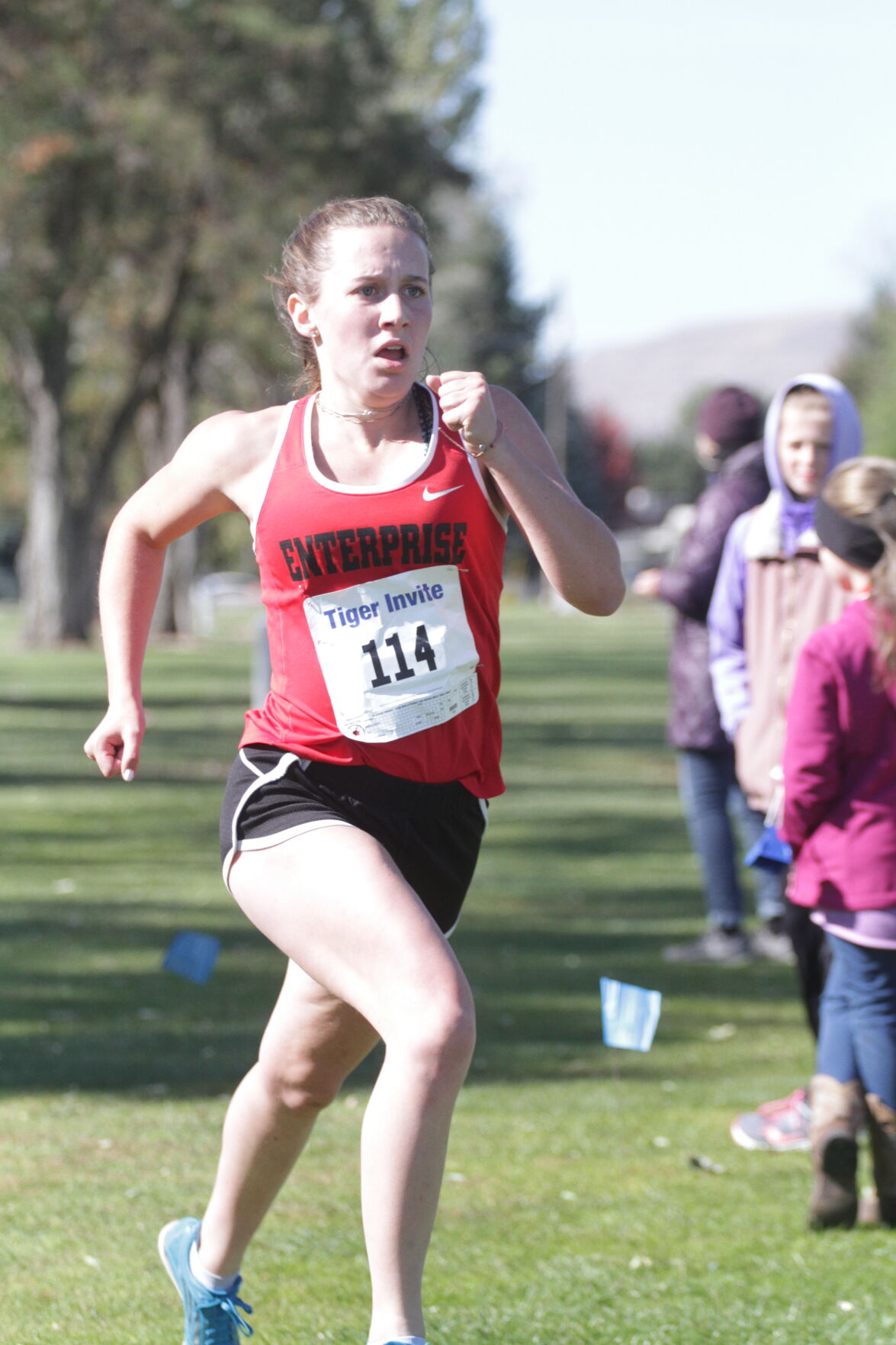 Kyla Hook runs for Enterprise during the La Grande Invitational Oct. 11, 2019. The school is among the eight regional schools that hope to potentially have a handful of cross-country meets as part of their approach to OSAA’s Season 1.

Powder Valley and Enterprise are among the eight regional schools that have a plan for a 5-on-5 football season, a volleyball season and potentially a handful of cross-country meets as part of their approach to OSAA’s Season 1.

Kyla Hook runs for Enterprise during the La Grande Invitational Oct. 11, 2019. The school is among the eight regional schools that hope to potentially have a handful of cross-country meets as part of their approach to OSAA’s Season 1.

LA GRANDE — The small schools of Union and Wallowa counties have a joint plan for sports during the Oregon School Activities Association’s Season 1.

The eight schools — 1A schools Powder Valley, Cove, Imbler, Elgin, Joseph and Wallowa and 2A schools Enterprise and Union — are set to have a regional league for volleyball and football, and are putting together plans to run a handful of cross-country meets.

Under the plan, Dunten said, football’s rules have been adapted from those of 7-on-7 passing leagues. Games would consist of four 10-minute quarters with a 10-minute halftime.

With games taking up only half the field, Dunten is hoping there can be two contests at once on either side of the 50-yard line.

“Ultimate goal is to do varsity on one field and JV on another,” he said.

Volleyball won’t see any changes in its rules when it comes to format, as the sport still will be 6-on-6.

There will, however, be several modifications in order for the contests to happen in a pandemic-changed environment. The football and the volleyball will be sanitized after each play by a person designated to do so. Dunten said other protocols will be reinforced in order for contests to happen, including masks being worn by all individuals — players, coaches, officials and even fans.

Fans — with a priority for parents first — will be allowed to attend events, but only up to the allotment given by Oregon Health Authority for gatherings. Currently, indoor gatherings are capped at 100 people, and outdoors at 250. That means, Dunten said, once players, coaches and other personnel are accounted for, there is room for about 60 spectators for volleyball contests and about 190 for football. Passes will be given out for volleyball contests.

“It’s going to be ever changing (due to) COVID-19 when it comes to what is going to happen at facilities,” Dunten said. “We’re going to be on a week-to-week basis. It could change next week. Could change before we play.”

Dunten said masks will be required at the outdoor events, even if people are watching while being socially distant.

“We’d rather overdo the protocols. We’re being overly safe,” he said. “We want to set ourselves up for success if (Seasons) 2, 3 and 4 exist.

“The mask has kind of replaced the cellphone in that you can’t leave home without it, and if you do there are consequences.”

He added that if protocols aren’t being met, superintendents could pull the plug on the games.

“We’re not going to jeopardize education with sports,” he said. “If sports shut down (because of an) outbreak, obviously school does too. We don’t want that.”

With some area schools starting their fall practice slate this week, Dunten said football and volleyball games could begin Sept. 18. That is the tentative plan, at least, for Powder Valley, Joseph, Cove and Union, Dunten said. Enterprise would start the following week, and Elgin, Imbler and Wallowa are set to start at the beginning of October.

Dates and locations for cross-county are still being finalized, but Dunten said meets could be hosted by Enterprise, Elgin and Union.

“Cross-country is low risk. That is still being looked into,” he said.

The wrap-up to the fall season would be during the latter part of October or early November, with winter sports potentially getting a shot at a Season 1 slate in November and December.

Schools will be charging regular admission prices to attend contests, but many of them are exploring setting up live streaming for people who want to watch but cannot attend — something that, Dunten said, could become the norm moving forward.

“If Season 2 occurs,” he said, “that is going to be widely available in Northeast Oregon.”