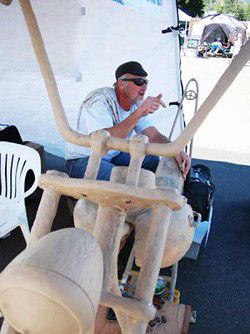 Rendezvous brings in about 400K

Rendezvous brings in about 400K

The third annual Bronze Bike Rendezvous in Joseph welcomed 1,500 to 1,800 bikers over the Aug. 22 and 23 weekend and boasted a total attendance of 3,400, according to organizer Terry De Spain.

All accommodations from Wallowa Lake to Enterprise were full two weeks before the date, he reported. Restaurants polled showed Friday and Saturday night record sales and the attendance of the Friday night street dance was up over 50 percent.

De Spain said he uses a numbers-crunching system devised by a tourism magazine, which estimates each visitor will spend approximately $250 on a weekend event. De Spain cuts that estimate to a modest $150 per visitor and still came up with a total of more than $400,000 in business coming into the county because of the event.

He credited his many volunteers with making the event a success, pointing out that although 90 percent of those volunteers are local another 10 percent come from as far away as California to enjoy the event as volunteers.

He also issued a "big thanks" to both the Oregon State Police and Wallowa County Sheriff's Office for doing "a great job." The event suffered no serious altercations with the Sheriff's office responding to just minor incidents involving locals in one case and visitors in another.

Two motorcycles crashed over the weekend, one in a minor fender-bender just outside Joseph at the monument site and another serious accident on the 39 Loop Road.

De Spain said that his organizers saw a 10 percent decline in pre-registration for the free event, despite the overall boost in attendance, and experienced a bit more difficulty in bidding up items in the auction. "Those were our signs of the down economy," he said. The down economy may be the driver in increased attendance, however, since motorcyclists may have chosen to attend the Oregon event over a national event.

De Spain's group will now meet and discuss the event, looking for ways to tinker with organization to make the Rendezvous even more profitable and enjoyable next year, De Spain said.