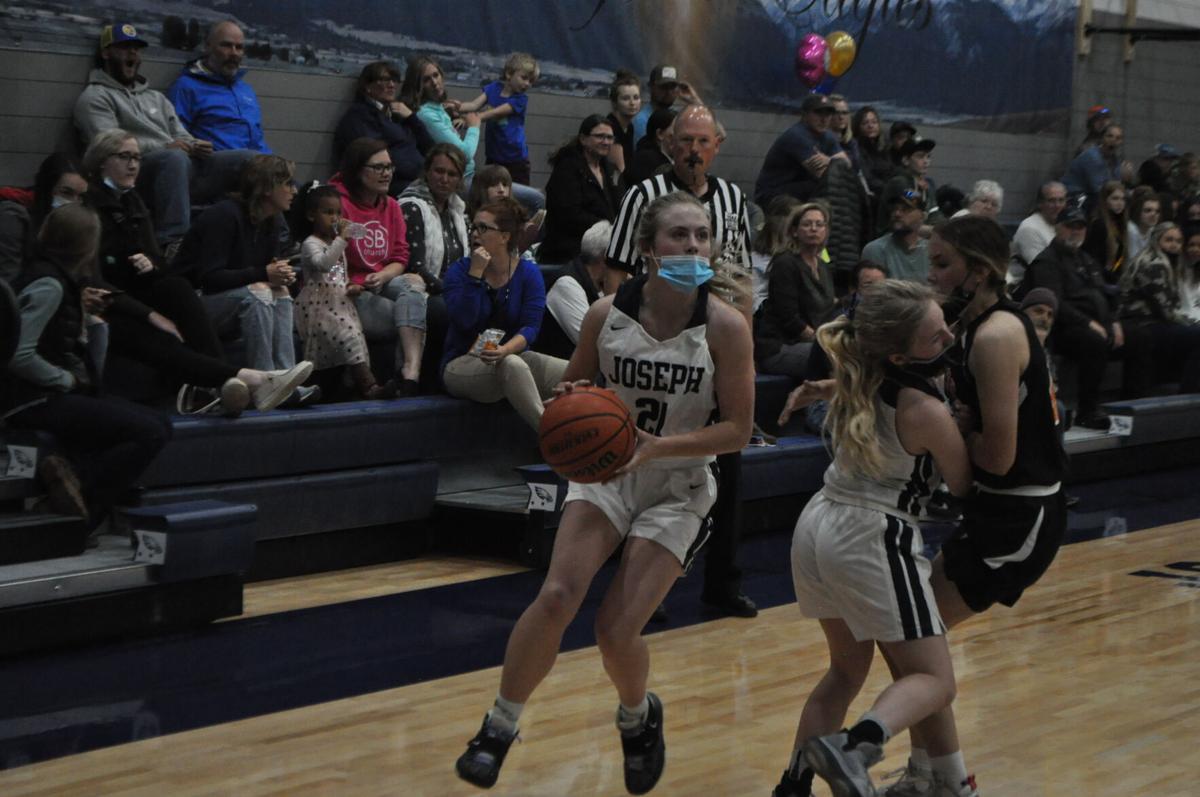 Joseph’s Sabrina Albee, left, sets up for a 3-pointer off a screen during the third quarter of a Season 4 basketball home game against Wallowa on Tuesday, May 25, 2021. Albee scored 19 points in the Eagles’ 42-33 victory. 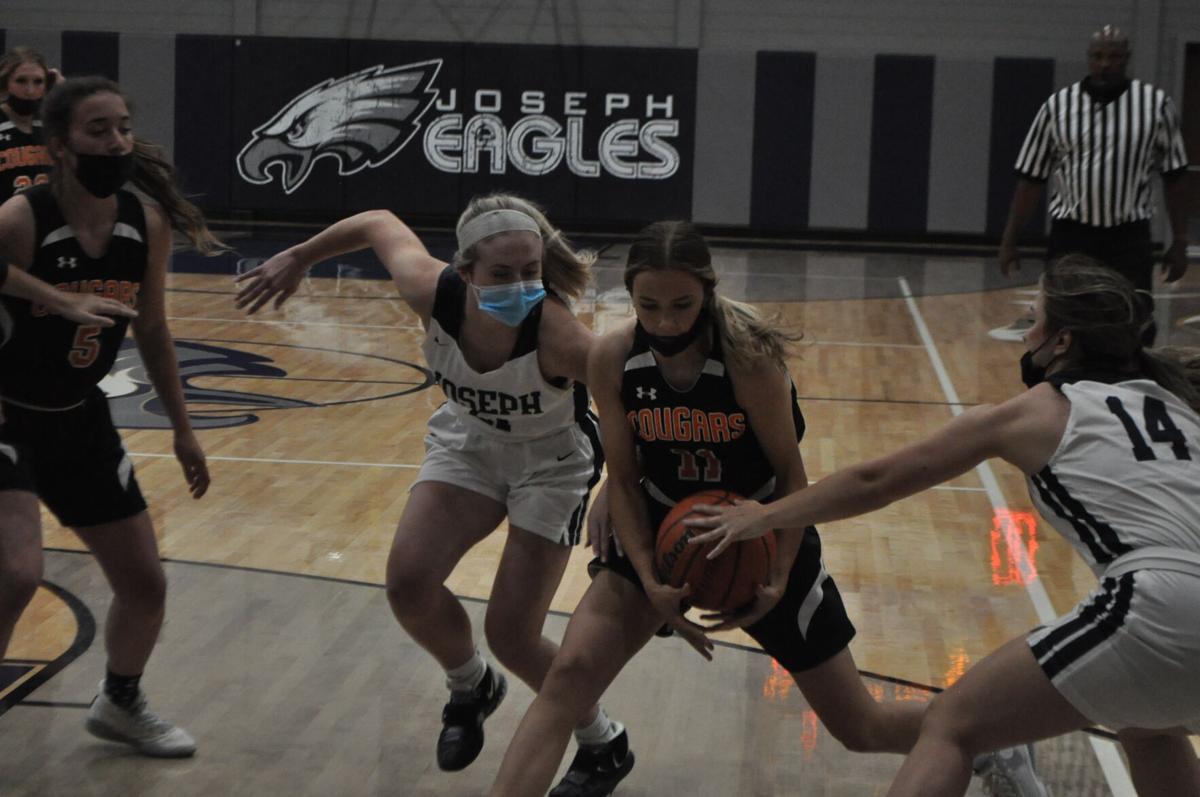 Wallowa’s Zoe Hermens, center, tries to split the defense of Joseph’s Sabrina Albee, left, and Brianna Micka, right, during a game Tuesday, May 25, 2021, in Joseph.

Joseph’s Sabrina Albee, left, sets up for a 3-pointer off a screen during the third quarter of a Season 4 basketball home game against Wallowa on Tuesday, May 25, 2021. Albee scored 19 points in the Eagles’ 42-33 victory.

Wallowa’s Zoe Hermens, center, tries to split the defense of Joseph’s Sabrina Albee, left, and Brianna Micka, right, during a game Tuesday, May 25, 2021, in Joseph.

The scoring surges proved to be enough to boost the Joseph girls to a win in their first basketball game on the new home floor.

Albee scored 11 of her game-high 19 points in the third quarter, Micka hit three fourth-quarter 3s — including two late seal the deal — and the Eagles fended off a scrappy Wallowa Cougar squad for a 42-33 victory Tuesday, May 25, in Joseph.

“Basketball is a game of runs, for sure,” Joseph head coach Lance Homan said. “That game at a certain point could go either way depending on how the ball bounces, but definitely, if we can get Sabrina going, and Brianna’s shooting well right now and getting her in her spots, that helps a lot.”

The Eagles never trailed after Albee grabbed a steal, dribbled up court and popped a long 3-pointer for a 26-24 lead with 2:55 to play in the third.

But the Cougars, who were playing their first game of Season 4, hung around until the final moments, responding every time Joseph went on a run.

Libby Fisher, who led Wallowa with eight points, scored twice in the final two minutes of the third to pull the Cougars even at 28-28. Aimee Meyers’ layup to close the third gave the Eagles a two-point margin, and Micka opened the fourth with a trey for a 33-28 margin.

“That pretty much was the difference right there,” said Greg Oveson, who is beginning his third stint as Wallowa’s head coach. “We ran out of gas. I don’t know that we were in any better shape than they were. I know Lance has had some girls that haven’t been there much. We just need a few more practices. I feel like we could have done a little better, but I’m really happy with what I saw tonight.”

The back-and-forth contest, which featured nine lead changes, saw neither team pull ahead by more than four points until the fourth quarter. Wallowa struggled with turnovers in its opener, but made up for it with scrappy defense and length at several positions which gave Joseph issues.

Ella Moeller had four of her seven points in the first to help Wallowa take an 8-7 lead after one, and her 3-pointer in the second countered a 3-point play by Meyers and kept the Cougars ahead, 11-10. Meyers and Zoe Hermens traded baskets in the final 10 seconds to see Joseph go into the half up 17-15, and Haley Brockamp’s layup to open the third tied the score.

Albee then found her touch. The senior hit a 3 coming off a screen, then later had a layup for a 22-19 edge. Sophie Moeller’s trey and Brockamp’s jumper gave the Cougars the lead back at 24-23 before Albee’s steal and 3 and then jumper in the key pushed Joseph back ahead, setting the stage for her teammate to go off in the fourth.

Sophie Moeller and Brockamp both added six points for Wallowa (0-1 overall), while Meyers chipped in seven for Joseph (2-1).

“I was pretty happy with the way we played,” Oveson said. “Five of the girls, last night was the first night they’ve been out. We were pretty disorganized. Other than that we did some good things. We start having a few more practices, I think in a couple weeks we’ll be alright.”