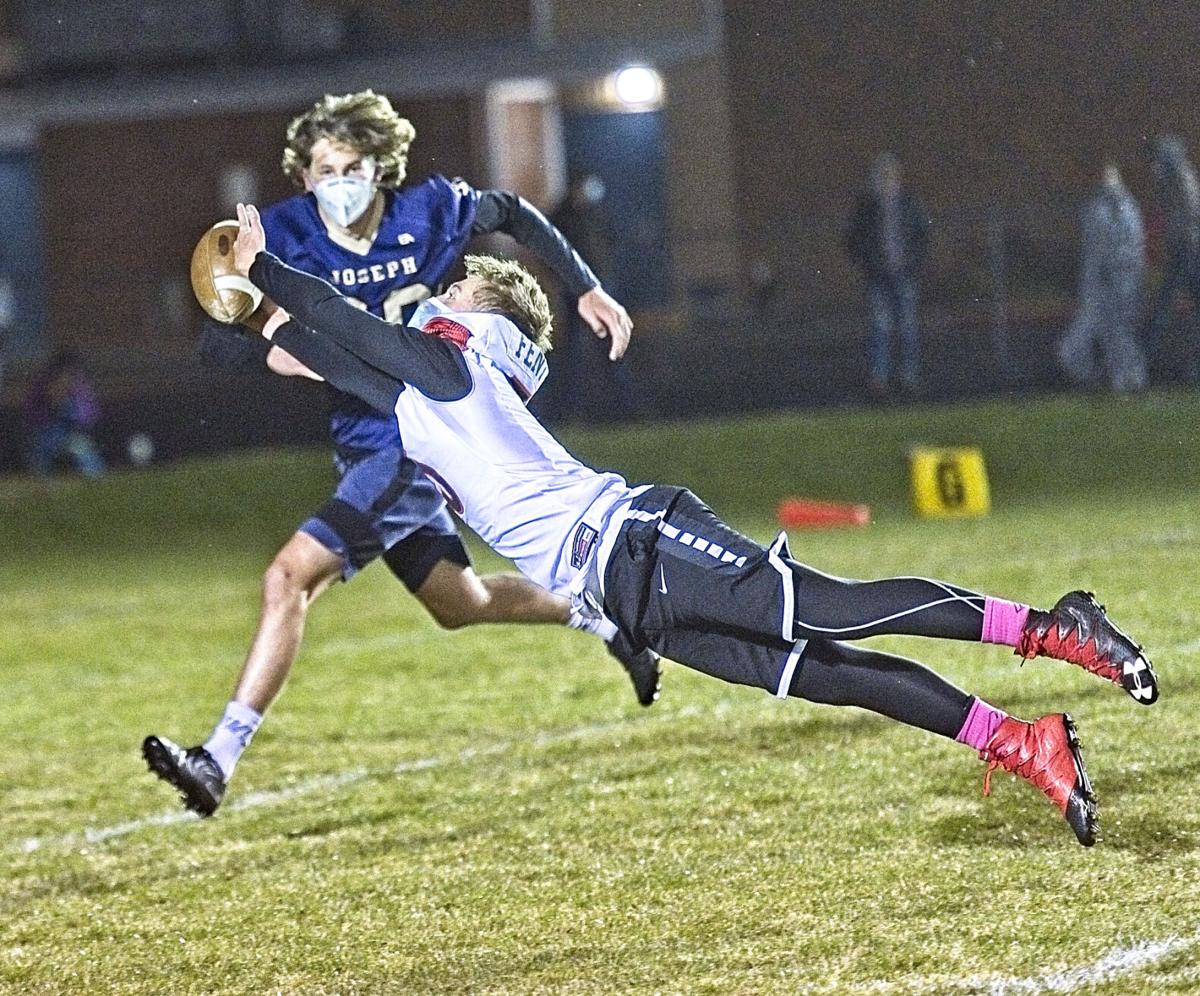 Enterprise’s Cody Fent stretches to catch a pass during the Enterprise-Joseph 5-on-5 football matchup at Joseph on Friday, Oct. 23, 2020. Joseph won 28-24 on a catch in the end zone by Chase Murray on the last play of the game. 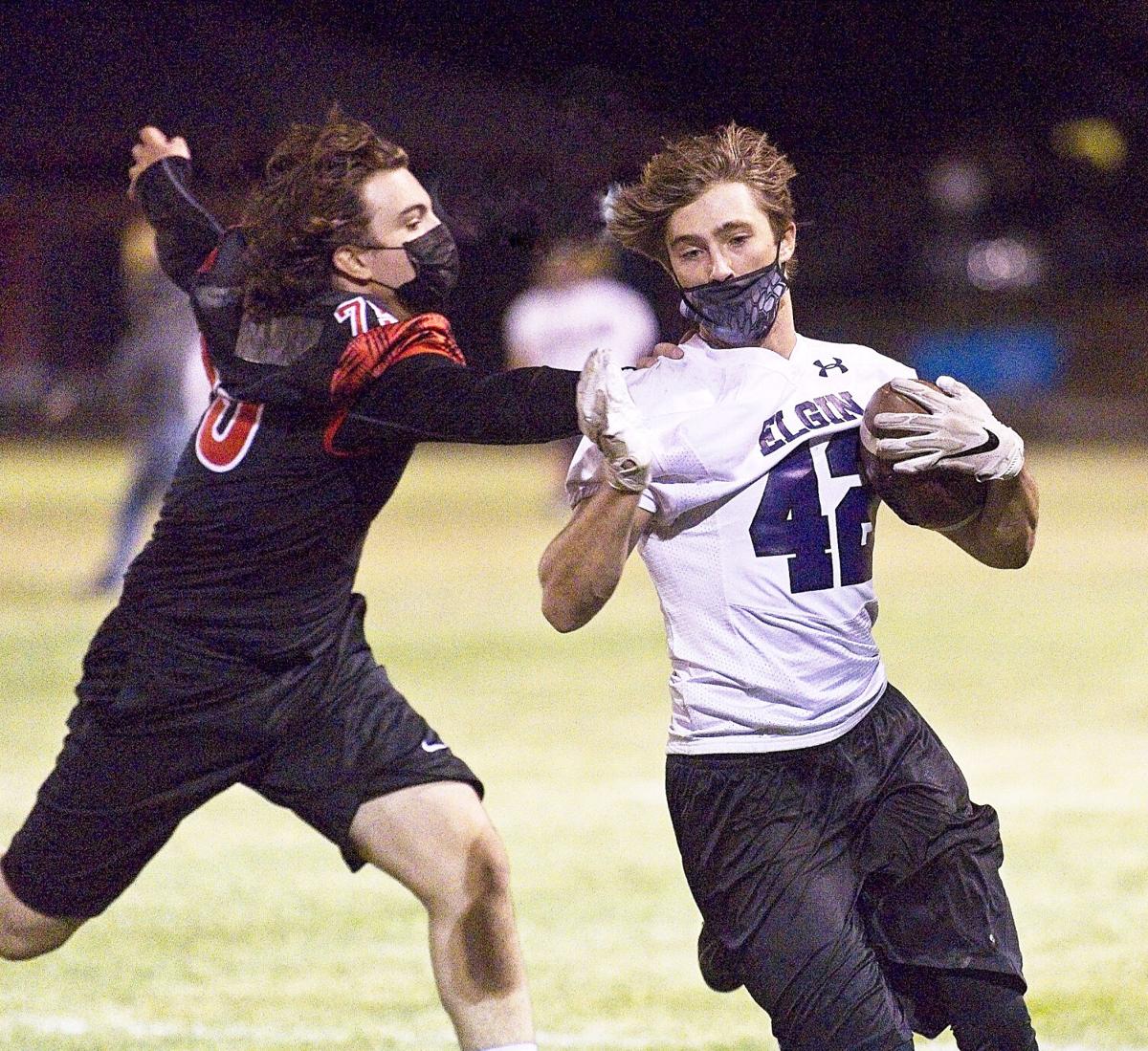 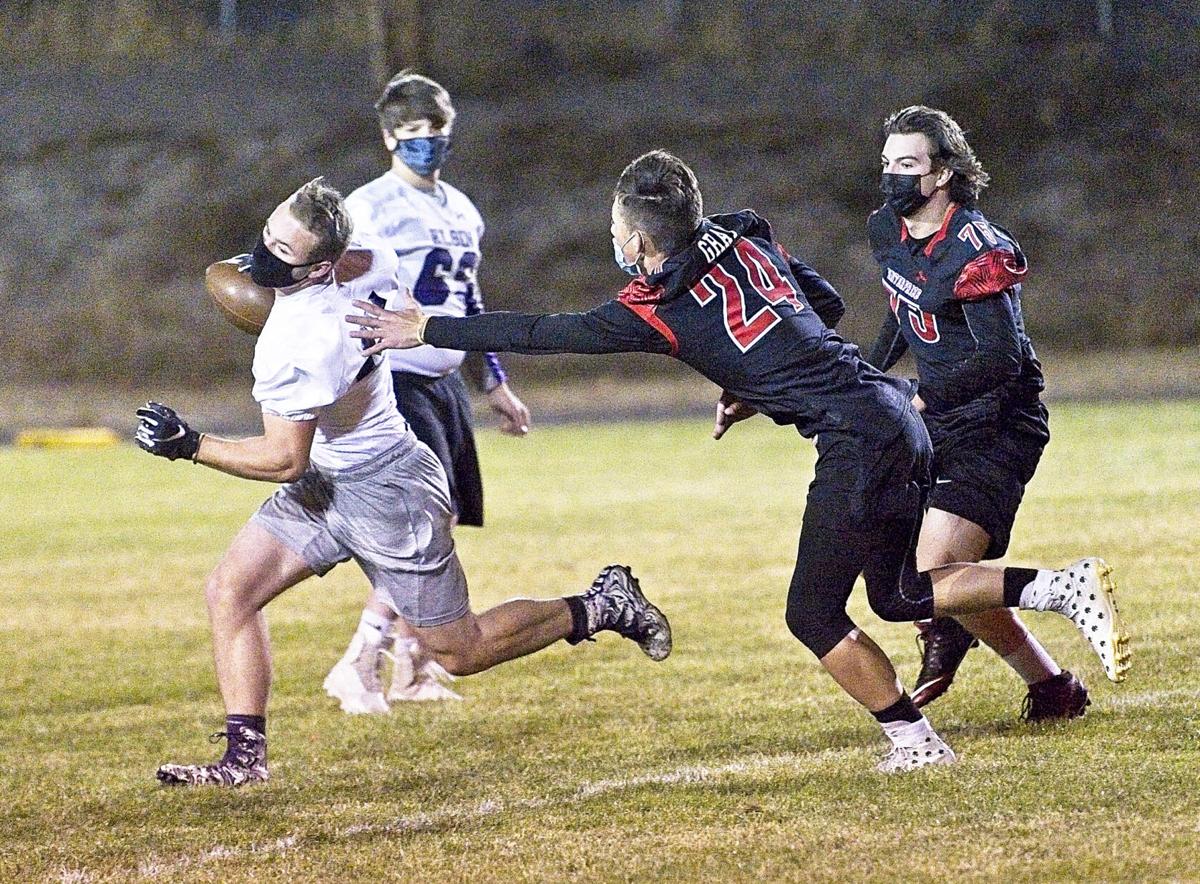 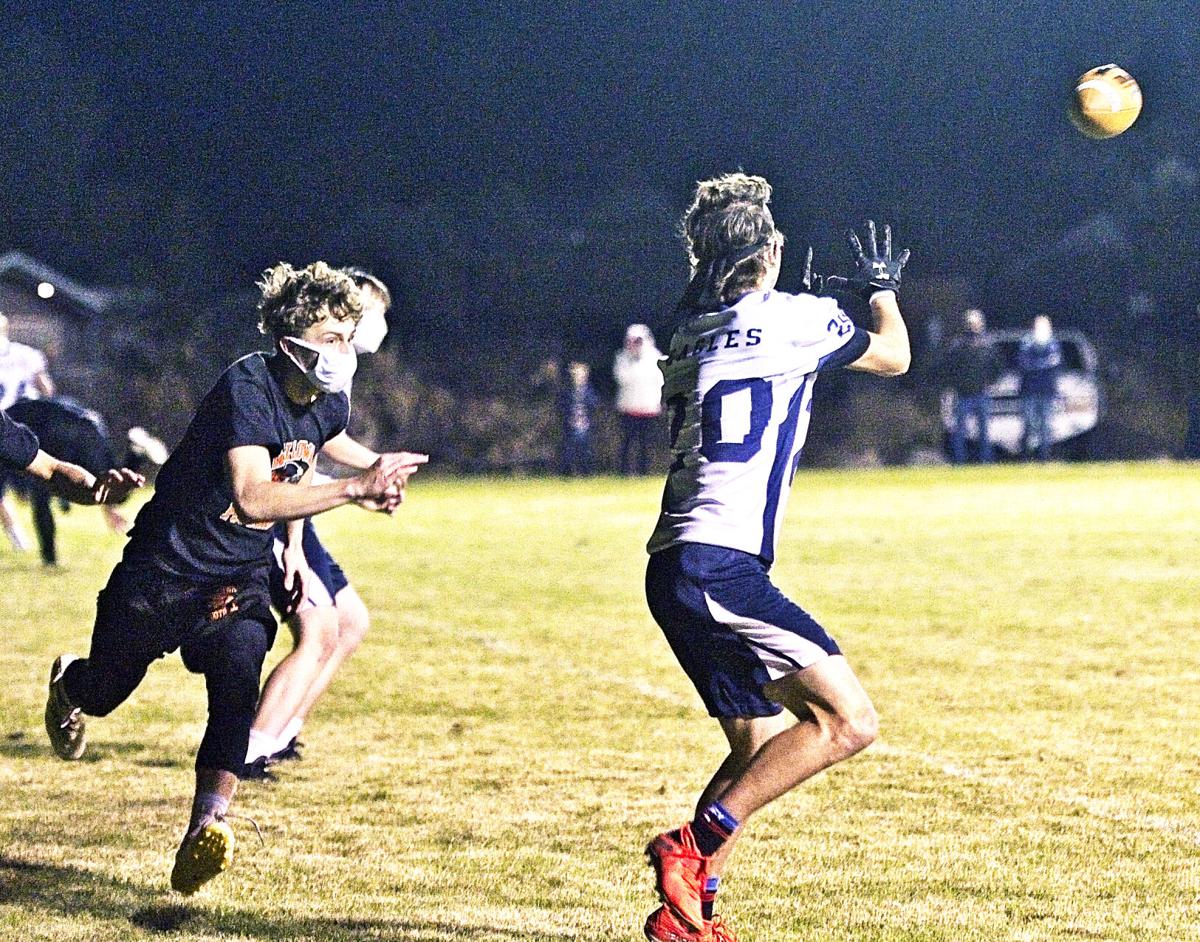 Wallowa's Mason Moore races to tag a Joseph receiver during their matchup at Wallowa on Friday, Oct. 9, 2020. Wallowa won, 58-35. 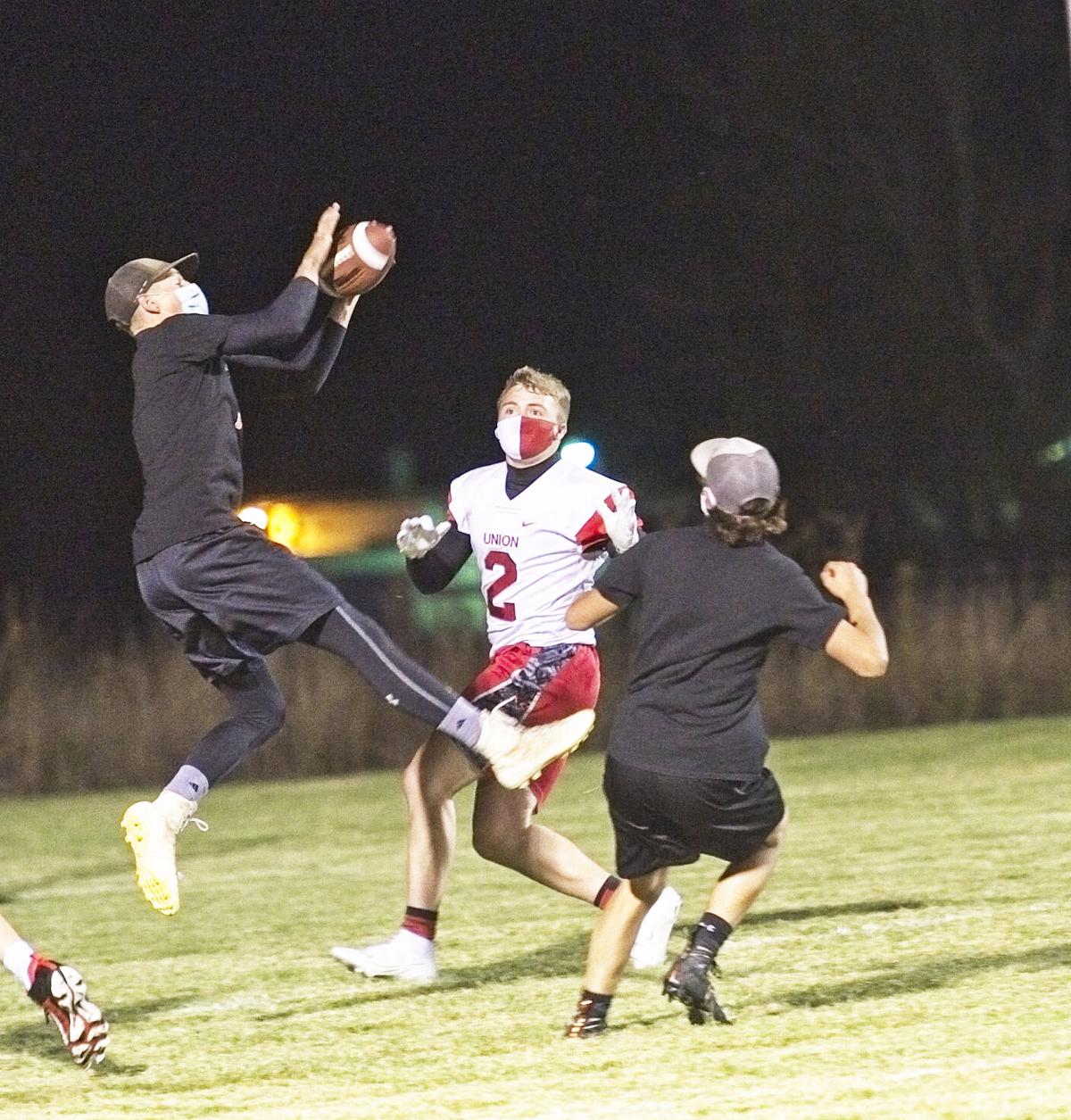 Wallowa's Zeb Ramsden snags a pass from his brother, Lute Ramsden during the Wallowa-Union game Friday, Oct. 2, 2020, at Wallowa. Wallowa won the game over 2A Union 68-35. 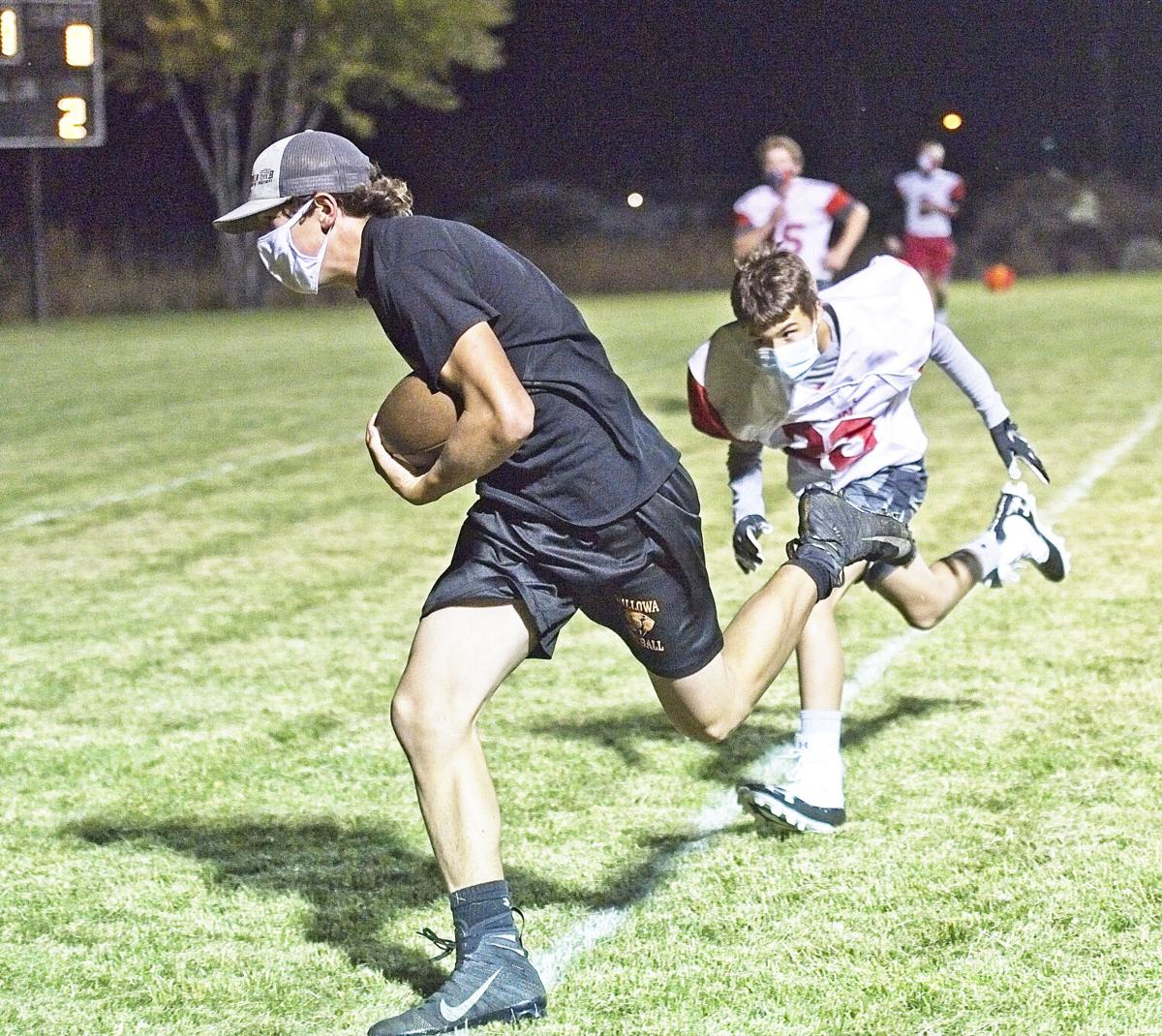 Wallowa player Tristin Bales carries the ball for a touchdown during Wallowa's 68-35 win over Union at Wallowa on Friday, Oct. 2, 2020.

Enterprise’s Cody Fent stretches to catch a pass during the Enterprise-Joseph 5-on-5 football matchup at Joseph on Friday, Oct. 23, 2020. Joseph won 28-24 on a catch in the end zone by Chase Murray on the last play of the game.

Wallowa's Mason Moore races to tag a Joseph receiver during their matchup at Wallowa on Friday, Oct. 9, 2020. Wallowa won, 58-35.

Wallowa's Zeb Ramsden snags a pass from his brother, Lute Ramsden during the Wallowa-Union game Friday, Oct. 2, 2020, at Wallowa. Wallowa won the game over 2A Union 68-35.

Wallowa player Tristin Bales carries the ball for a touchdown during Wallowa's 68-35 win over Union at Wallowa on Friday, Oct. 2, 2020.

ENTERPRISE — The Oregon School Athletic Association’s (OSAA) Season 1 of fall 2020 has been a season like no other, especially for football, and has left players and coaches alike inspired, depressed and hopeful all at the same time.

The game, a 5-on-5 touch football contest where passing is supreme and tackling is forbidden, has motivated some students who never would have played in a regular tackle season to take up football, and others to move with their families to other states where they could participate in a more physical, traditional game.

“Season 1 football is not really what you’d call ‘football’ traditionally,” said Joseph Charter School Athletic Director Jason Crenshaw. “We, as a regional group of schools, decided to go with 5-on-5 because even though it’s limited contact, there are a lot of kids who don’t like that contact. And so our participation has actually gone up. As a region, we’re really fortunate. Most of the state isn’t doing anything, because they can’t.”

Wallowa and Joseph coaches agree that Season 1 has been a great time to build offensive and defensive skills, including quarterback timing and coaching the finer points of the game.

“Once they get into pads,” JCS assistant coach Jacob Holguin, said, “it’s just a big crash. But here, you can teach technique and really build athleticism.”

“We normally play 6-man football,” Crenshaw said. “So 5-on-5 isn’t really that different except for the defense. The emphasis in our regular games is on passing. With this kind of game you don’t have to worry about size disparity as much if you are playing a bigger school. We’d play La Grande if they had a team.”

“I just want to see improvement,” said Enterprise coach, Rusty Eschler. “The score at the end doesn’t really matter to me.”

Eschler views the “one-hand-touch” game as a way to improve skills at catching the football, running routes, and learning a zone defense.

Joseph players were enthusiastic about the Season 1 brand of football.

Chase Murray said that he played football as a freshman, but then stopped because of concussions. To buy a helmet to play football again, he said, would be expensive.

But none of the players want to shift entirely to touch football forever.

“No, absolutely, not. I’m ready to hit some kids,” they commented together.

Wallowa coach Matt Brockamp and JCS’s Duncan Christman both said that one downside of a season of only touch football is a buildup of frustration.

“You’re playing football. But once that exertion and that energy has been stripped out, you can feel the tension. (The tackle) is right there, but you can’t complete it. So sometimes frustration gets a little high,” Christman said.

The coaches also agreed that much of defensive skills, especially tackling and blocking, and the work of special teams, including kicking and punting, are “out the window” in this season.

“In defense, there’s a lot of one-on-one work. In this kind of season, those players take a step back,” Christman said.

Eschler observed that some of his linemen did not come out for the Season 1 five-on-five games.

“This is made for your receivers, quarterbacks and running backs,” he said. “It’s not really made for the bigger kids who struggle with the running.”

That said, Eschler noted the several linemen were playing, and working on developing new skill sets.

Brockamp expressed disappointment that his defensive players were getting little to no playing time, and little encouragement to practice.

“Players miss the physical contact of the sport,” he said.

Brockamp said that several Wallowa players and their families had moved to Idaho where they could play the full-contact sport. He said that it’s unlikely that they will return.

Holguin noted that some players had “absolutely” not come out for Season 1 5-on-5 touch football at JCS.

“Everyone has their own flavor and for some of these kids, contact is important to their game,” he said. “They didn’t feel they’d be as valued as players. So they took it upon themselves to explore other ventures. That’s sort of what this season is about.”

On the brighter side, Brockcamp has been coaching what he termed “college-level passing and offensive patterns.”

His running backs, and offensive ends are more elusive, and now run some sophisticated routes, and quarterback Lute Ramsden has increased his passing skills, Brockamp said.

The skill-building has evidently worked for the Cougars. They have won three of their four of games, including a 58-35 victory over rival Joseph and a 63-35 drubbing of Union, a 2A school which is playing football at the 1A level.

Christman said he thought the opportunity to play teams that are not in their league, such as Union, was helpful.

“It gives us a completely different look at schools we haven’t seen for a couple of years,” he said. “It really shows us what’s out there and how we stack up against other schools.”

Season 1 has been so good at building skills that JCS assistant coach Holguin said he’d like to have a preseason summer league of touch football every year.

“Now that it’s established within the county, it should be something that we have every single summer,” he said.

“(The teams in the region) are trying to figure out if we can work basketball into Season 1 using our model for volleyball maybe in November-December,” he said. “But that’s going to be a decision made above us, through OSAA, the Oregon Health Authority and the governor’s office.”

A lot of that depends upon what happens with COVID-19 and the metrics that have to be met. Even if the schools have seasons 2, 3 and 4, they’re not going to have a traditional state championship. But the coaches agreed they will do what they can to keep kids involved in athletics by thinking outside the box.