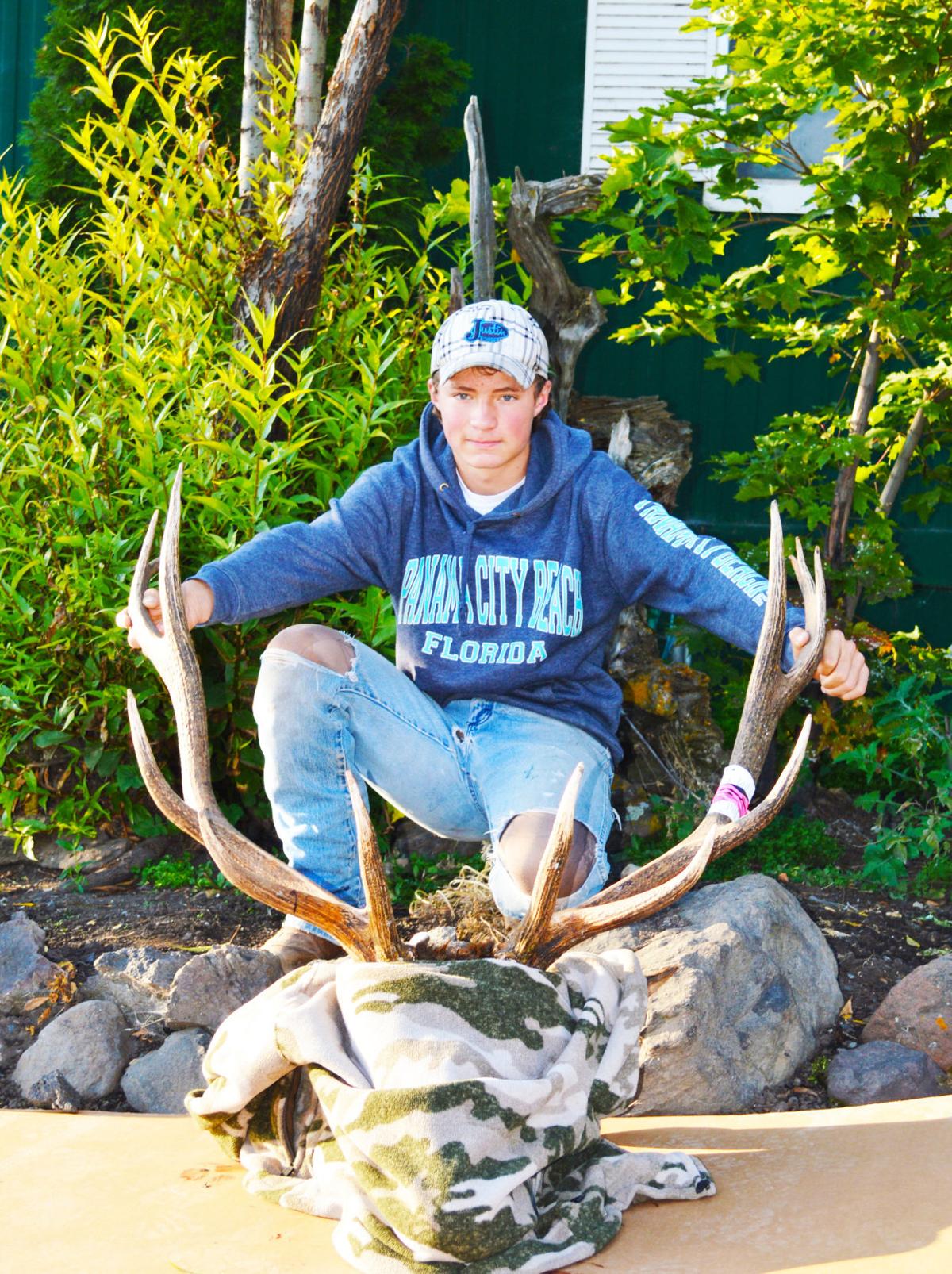 Cole Gomes displays the 7x7 rack from the elk he harvested from the Imnaha unit just before the end of hunting season. Gomes said he got within 23 yards of the animal to make the kill with his bow. 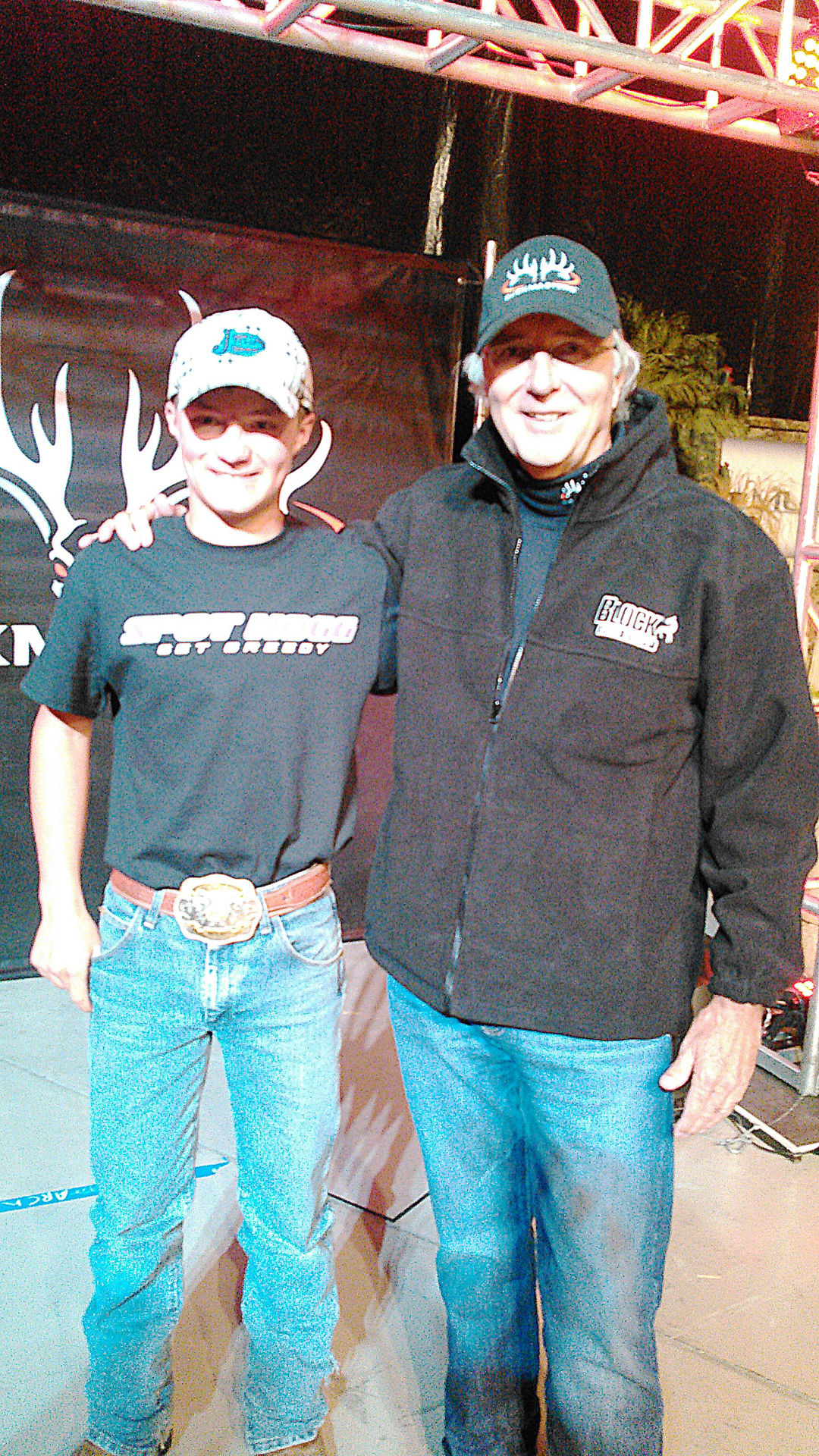 Cole Gomes, left, poses with renowned bowhunter Jackie Bushman, who hosts his own show on the Outdoor Channel.

Cole Gomes displays the 7x7 rack from the elk he harvested from the Imnaha unit just before the end of hunting season. Gomes said he got within 23 yards of the animal to make the kill with his bow.

Cole Gomes, left, poses with renowned bowhunter Jackie Bushman, who hosts his own show on the Outdoor Channel.

Alder Slope resident Cole Gomes, 14, is living proof that hard work and determination pay off in spades no matter your age. The Enterprise High School freshman just placed first in the seniors division (14-18) national 4-H archery competition in Montgomery, Ala., on Aug. 26. More than 120 archers participated in the event.

Gomes, accompanied by his mother Julie Gomes, made his first airline trip for the event and was the only Oregonian to compete. He said that in the back of his mind he also was hoping for a top-seven performance at the 4-H tournament because it would secure him an invitation to compete at the Buckmasters World Champion youth archery tournament, also in Montgomery on Aug. 28.

When Aug. 26 rolled around, Gomes, who had spent unending hours of practice for the event, saw his dream realized. Though he was the youngest competitor in his division, he earned first prize, which included a trophy, belt buckle and a spot in the Buckmasters event.

He also was the youngest competitor at Buckmasters event, where he placed third and earned a $1,200 Mathews bow and a plaque.

“It’s pretty convenient the way it all worked out,” Gomes said. “A piece of my hunting bow broke off and I had to borrow a bow for this hunting season.”

The Bushman connection paid off in other ways.

“Jackie Bushman went out of his way to help kids,” Julie Gomes said. “It’s the first time he let kids be on the show, and he devoted about four hours to us. He also gave all the (competitors) tickets to the Kentucky Headhunters concert. He just did that out of the kindness of his heart.”

Cole Gomes said the two tournaments were quite different.

“4-H had its specific guidelines, and it was a stationary target shoot. The 4-H is great; it’s what brought me to Alabama and to the Buckmasters, which is a whole different thing. It had pop-up targets, and it was nice — a cool indoor range where you’re surrounded by people, and we shot off of a pedestal.”

The most challenging part of the competitions for Gomes was trying to hold up under pressure.

“He wore his cowboy boots and his jeans just like he does every day,” his mom said. “People looked at him like he was nuts.”

Gomes wasn’t born with a bow in his hand. Because of a childhood birth defect called tethered spine allowed Cole only limited involvement in contact sports. His sister and brother-in-law got him started shooting around age 9, and he quickly excelled at the sport. His parents also took up the sport and now function as leaders of the White Tail Legends 4-H Archery Club.

Gomes’ fame as an archer is spreading outside of Wallowa County. He recently was featured with a photo in National Field Archery Association magazine and a feature story in Oregon Bow Hunter magazine. However, the new-found fame doesn’t leave Gomes much time to rest on his laurels. Upon his return from Alabama, he hustled off to elk camp for the season and bagged a 7x7 elk just two days before the end of the season. The White Tail Legends club is starting up again in November.

Already, he is preparing to attend 4-H nationals in Nebraska in June. He currently is raising funding for the trip by collecting aluminum cans while also planning a future bow-hunting seminar with other well-respected archers from the region.

The trip left Gomes with a profound sense of achievement and an extra appreciation for 4-H.

“The experience of being able to go that far and compete at that level while meeting Jackie and appearing on television means a lot, but 4-H is what brought me there,” he said.