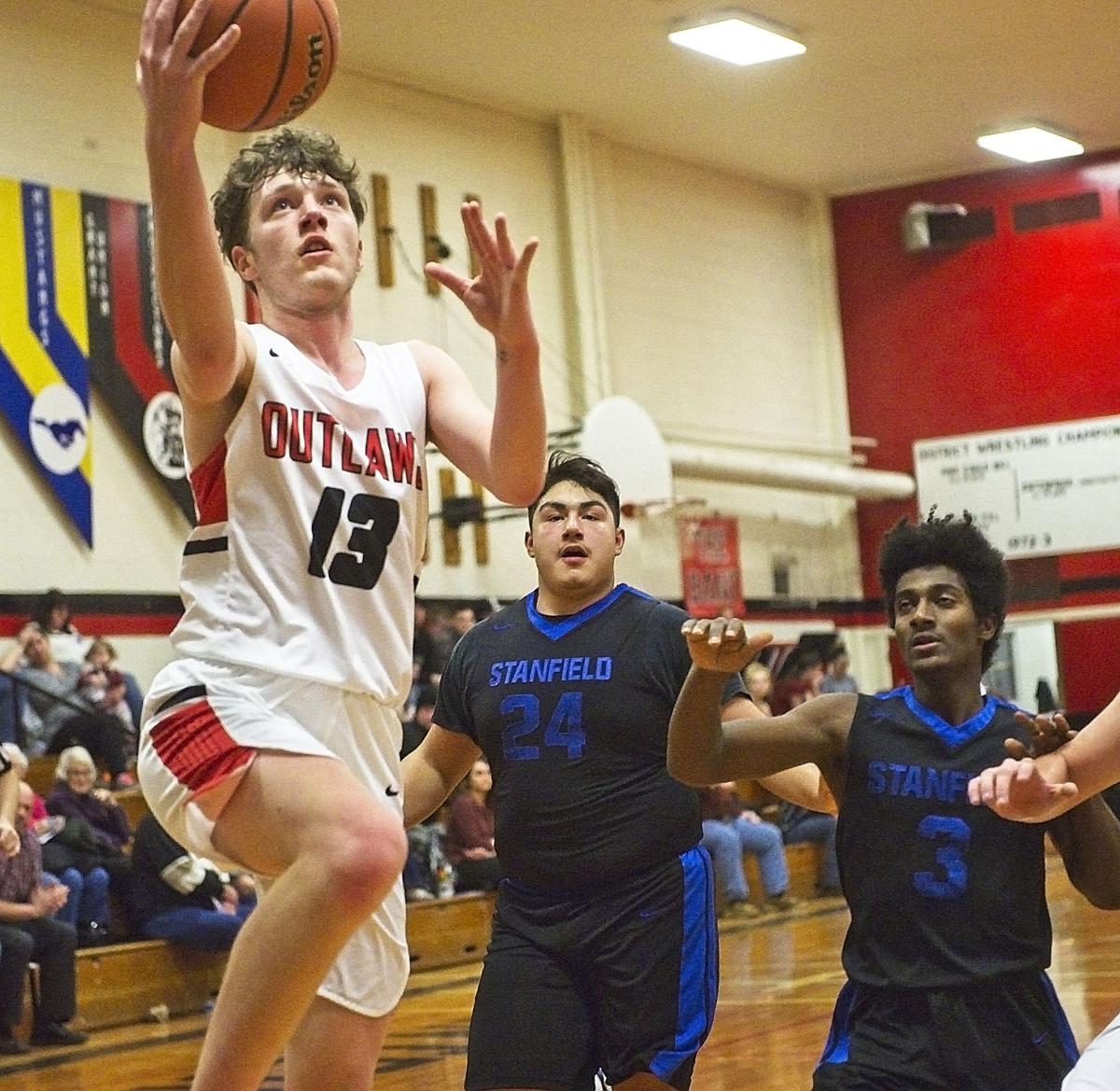 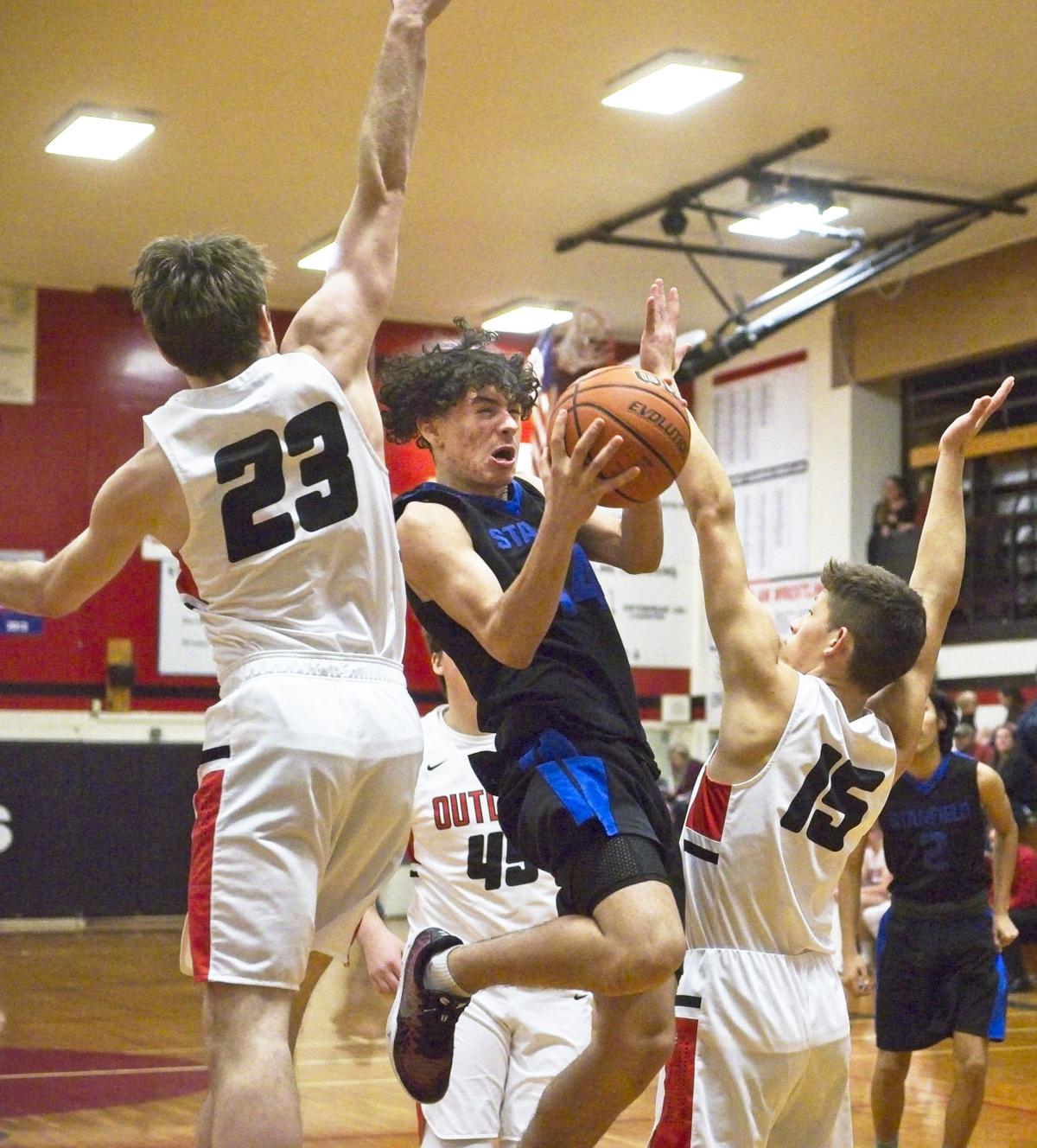 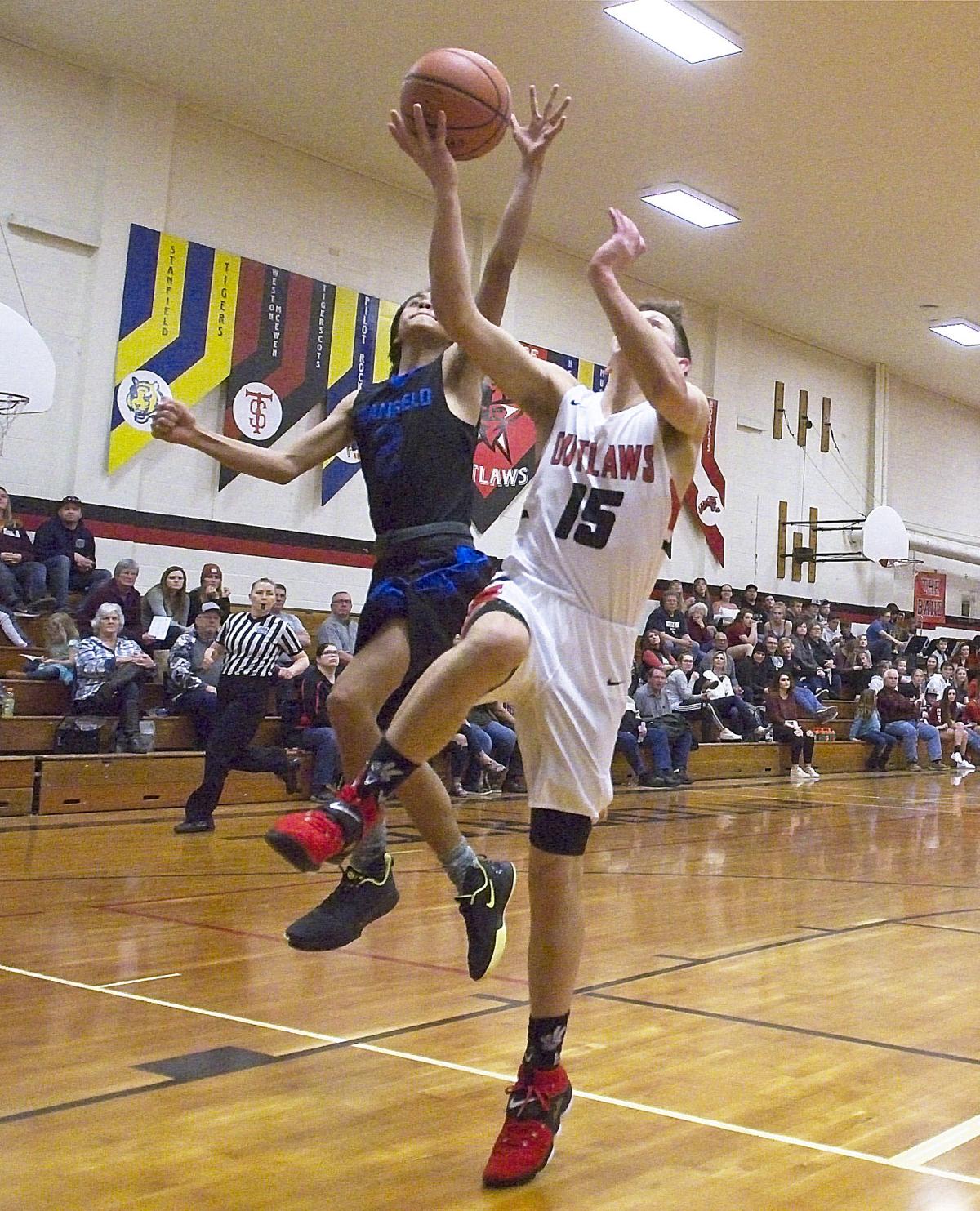 Gideon Gray goes in for a layup. 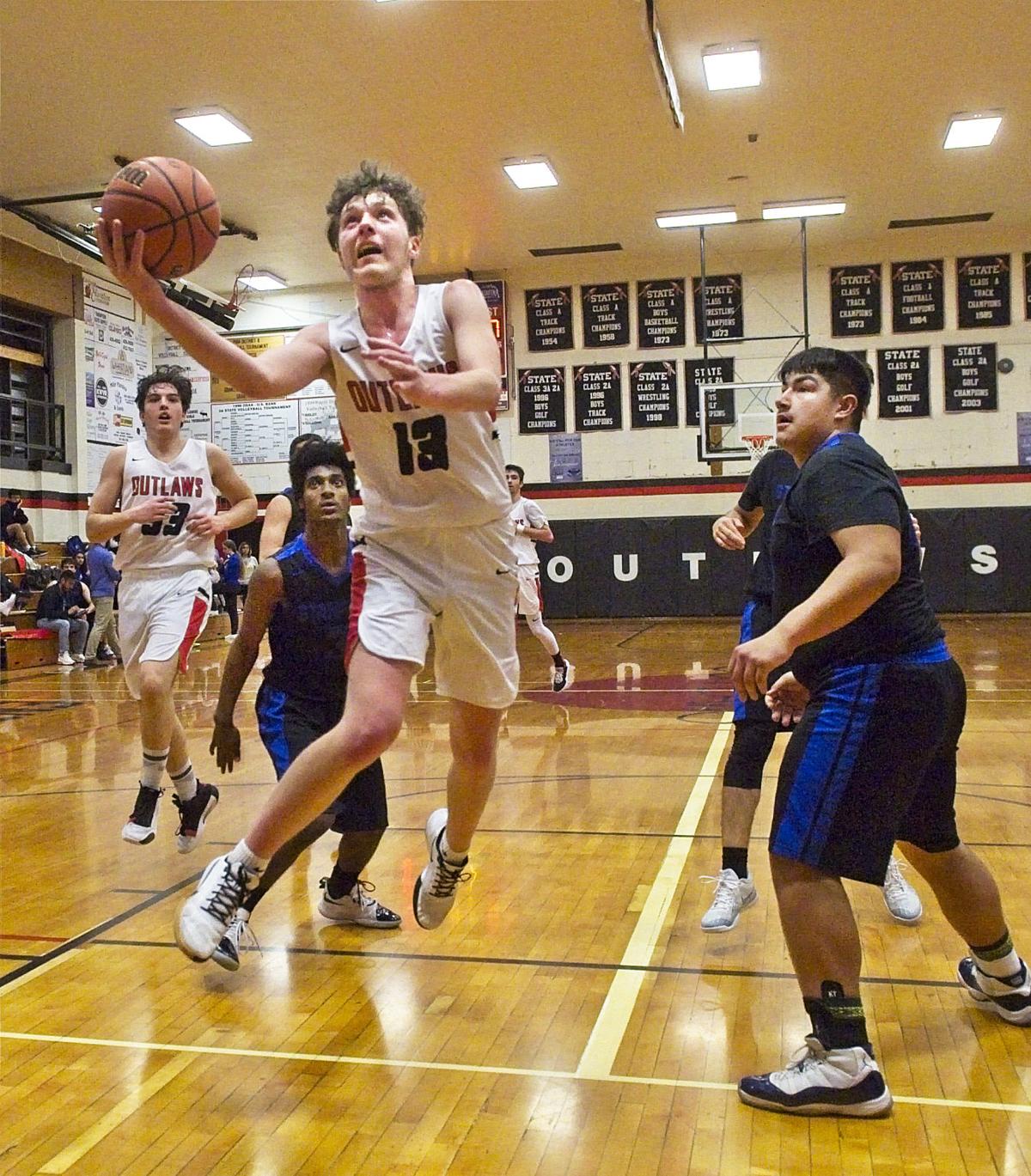 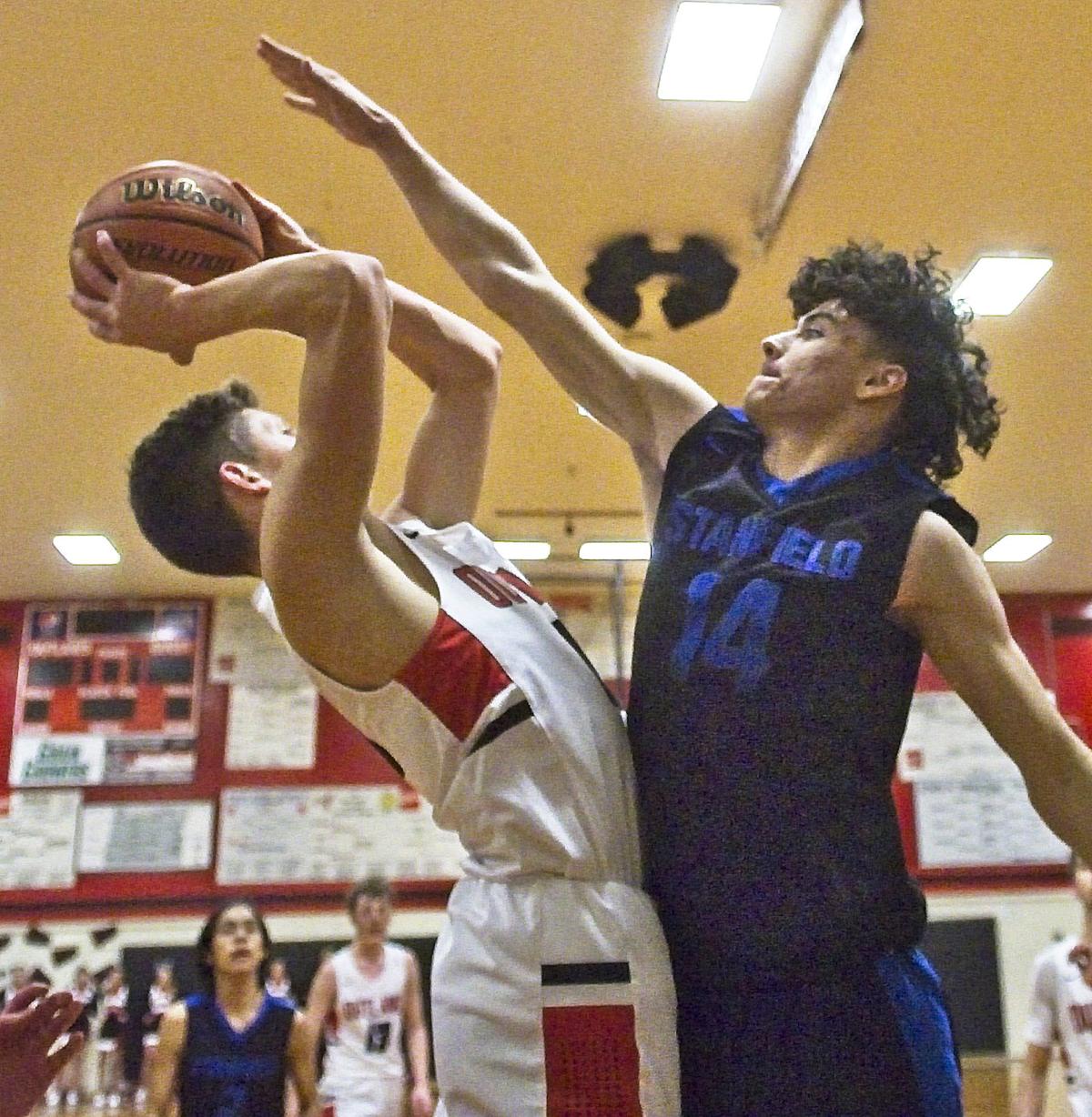 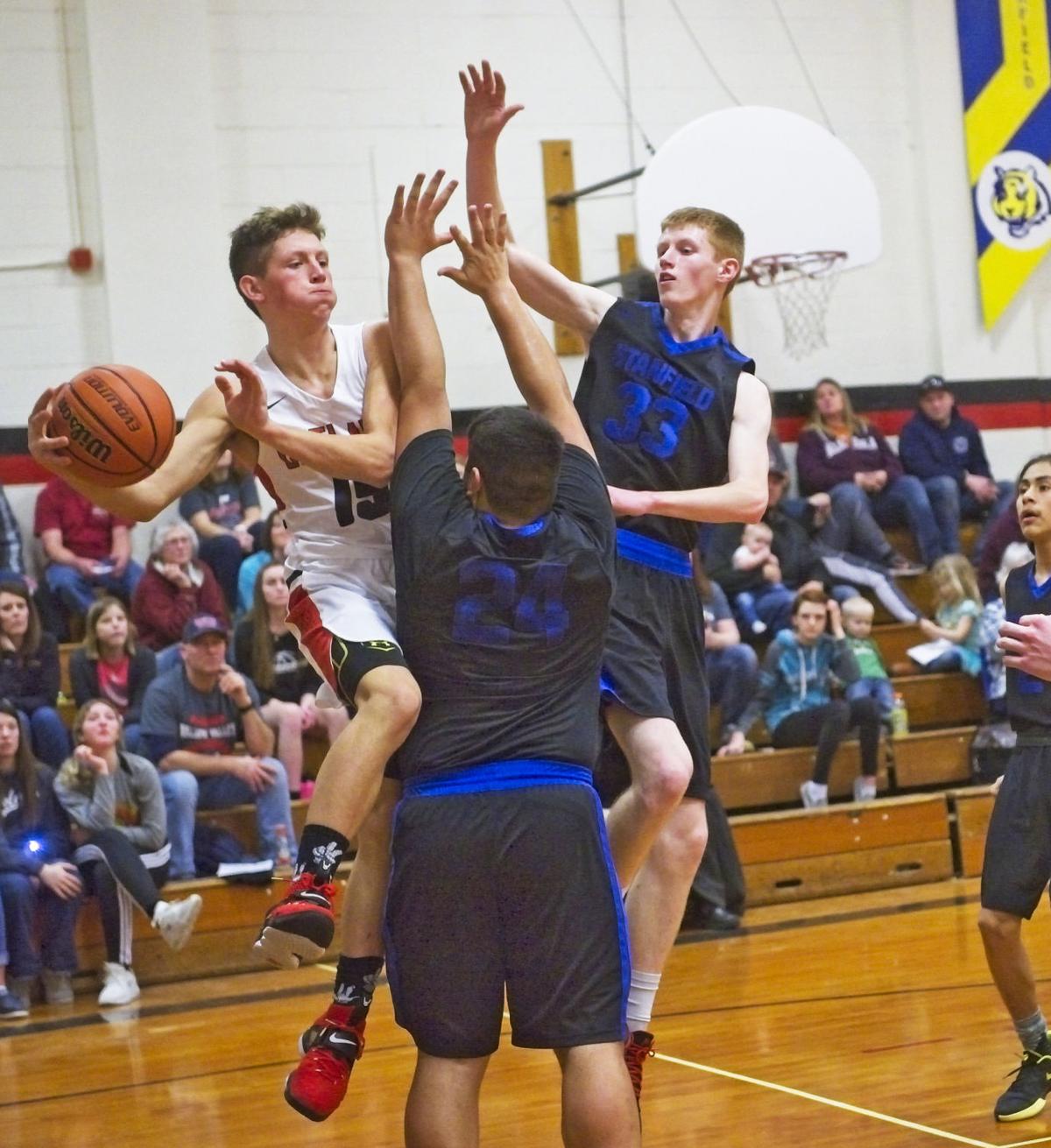 Gideon Gray passes to the outside.

Gideon Gray goes in for a layup.

Gideon Gray passes to the outside.

Changing opponents on the following night didn’t help the Outlaws as the Stanfield Tigers clawed their way to a 69-56 victory over the Enterprise Outlaws in a home game Saturday night. The loss stung as three Outlaws’ players scored in double digits.

The Outlaws came out flat-footed, and seemed to forget that rebounding was part of playing basketball. Still, their first-quarter tally of 15 points left them behind the Tigers by only four points, as Devin Greer sank four baskets and a foul shot for 9 points. But the half-time spread, 39-28 suggested trouble was in the offing for the Outlaws.

Enterprise narrowed the gap slightly to 58-49 in the third quarter on stellar shooting by Cason Kirkland and David Salim while the Outlaw defense held the Tigers to 19 points. In the fourth quarter, the Outlaws managed only 7 points, all by Devin Greer.

“On Saturday night, I thought we brought some respectable basketball to the floor, and I was very proud of our Saturday performance,” coach Crawford said. “They (the Tigers) have a great offense, and we couldn’t slow them down even though we were scoring a lot of buckets ourselves.”

In the end, Crawford was philosophical about the loss.

“It’s a good experience for me and my younger kids, of course,” he said. “Hopefully we can learn from all of this.”

He added that he knows the squad is capable of playing great basketball but struggles in game situations, even if practice during the week went well.

Greer, the Outlaws’ high scorer, poured in a heroic 26 points, sinking all his foul shots as well as three 3-pointers while shooting 63% from the floor. Cason Kirkland contributed 14 and David Salim bucketed 11 while seizing nine rebounds and amassing four steals.

Top scorer for the Tigers, Mario Sanchez, made 17 points while Rene Sanchez bucketed 14. The loss leaves the Outlaws with a 6-11 overall record, with a ranking of No. 31 in state 2A teams.

The Outlaws played Heppner at home on Tuesday, Feb. 11 and travel to Pilot Rock to play the Rockets on Friday, Feb. 14. Coach Crawford is hopeful of good results in the final two games.

“We know where we’re ranked in the league, and Friday night sealed our fate, and for them to come out really hard on Saturday speaks volumes to our character, and I know we’re going to finish the season doing our best,” he said.