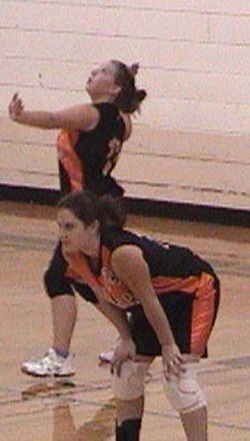 Dominique Cherry serves as Ayesha Wortman prepares for their winning play against the Outlaws. 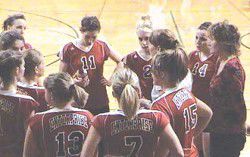 Enterprise talks it over during a timeout in the match against Wallowa on Oct. 3.

Dominique Cherry serves as Ayesha Wortman prepares for their winning play against the Outlaws.

Enterprise talks it over during a timeout in the match against Wallowa on Oct. 3.

Wallowa Coach Terri Wilson was justifiably proud of her squad as they won both head-to-head matches against Enterprise this year. "I think that both teams played well at times, and each team demonstrated some periods of inconsistency. But this match was valuable for us. It forced us to work on our focus and a determination to keep fighting."

Game one was a back and forth contest with the Outlaws moving to a seven-point lead at 9-2, but the Cougars came back to enjoy and 18-16 lead. Enterprise would win a side-out and Nicole Santiago would begin a run of five points to regain the lead at 22-18.

After a quick side-out, Heather Bruce would serve the last two points, earning the last one with an ace.

The Cougars came out fast in the second game and the Outlaws could not respond. Consistency by Wallowa and inconsistency by Enterprise marked the entire game. Wallowa was up 14-7 when Caitlyn McKenzie began to serve. The score was 22-7 before Enterprise could stop the Cougar's rally. An exchange of services and the game was ended by a kill shot by Dominique Cherry.

Early in game three Theresa Stangel and Andrea Schaefer put together serving rallies of four points each and took the Outlaws to a 13-7 lead. Enterprise kept the Cougars off balance with a number of drop shots by Kayann Layton, and kills by Santiago and Andrea Schaefer. The teams traded many side-outs until a Bruce to Schaefer spike finished the game.

Wallowa responded with another fast start in game four. Ayesha Wortman got the Cougars off to a great start serving six quick points. Although Enterprise would work back to a two-point deficit at 14-12, strong play by Felycia Gladden, Brittany Mayton, Jill Haga, and Dominique Cherry kept the Outlaws frustrated in their comeback attempt. Slowly, Wallowa would respond with a three-point serving rally by Wortman to establish a 17-13 lead. The rest of the game was evenly played until Cherry set Haga up for the game-winning spike.

The fifth game reminded the Outlaw fans of a previous match against Heppner. Layton served the Outlaws to a 7-1 lead before Haga stopped the run with a strong kill. WHS's McKenzie responded with another eight point run aided by strong play at the net by Mallory Turner. The teams would trade points until the score stood 11-11. A kill by Haga, and three miscues by the Outlaws would end the match.

"Our inconsistency seems to haunt us. It was a frustrating loss after being ahead 7-1 in the 5th game. We are going to take this as another learning experience, leave it in our past and move on to Friday. Elgin was there watching so they know what to expect, we need to be prepared for a tough match Friday."

Wallowa offensive leaders included Mayton with a 95 percent hitting success, including 11 kills, she was closely followed by Turner and Haga with 11 kills each. Wallowa served at 87 percent and was led by McKenzie with a 37/38 effort including nine aces. Turner was 12/13 and Cherry was 10/11.

Defensively, McKenzie and Wortman led the team with 17 digs.

Defensively, Layton had eight digs, followed by Liane Maasdam and R. Schaefer with six. Leaders in blocking attempts were A. Schaefer with seven, Santiago with six, and Kayla Foster with one.