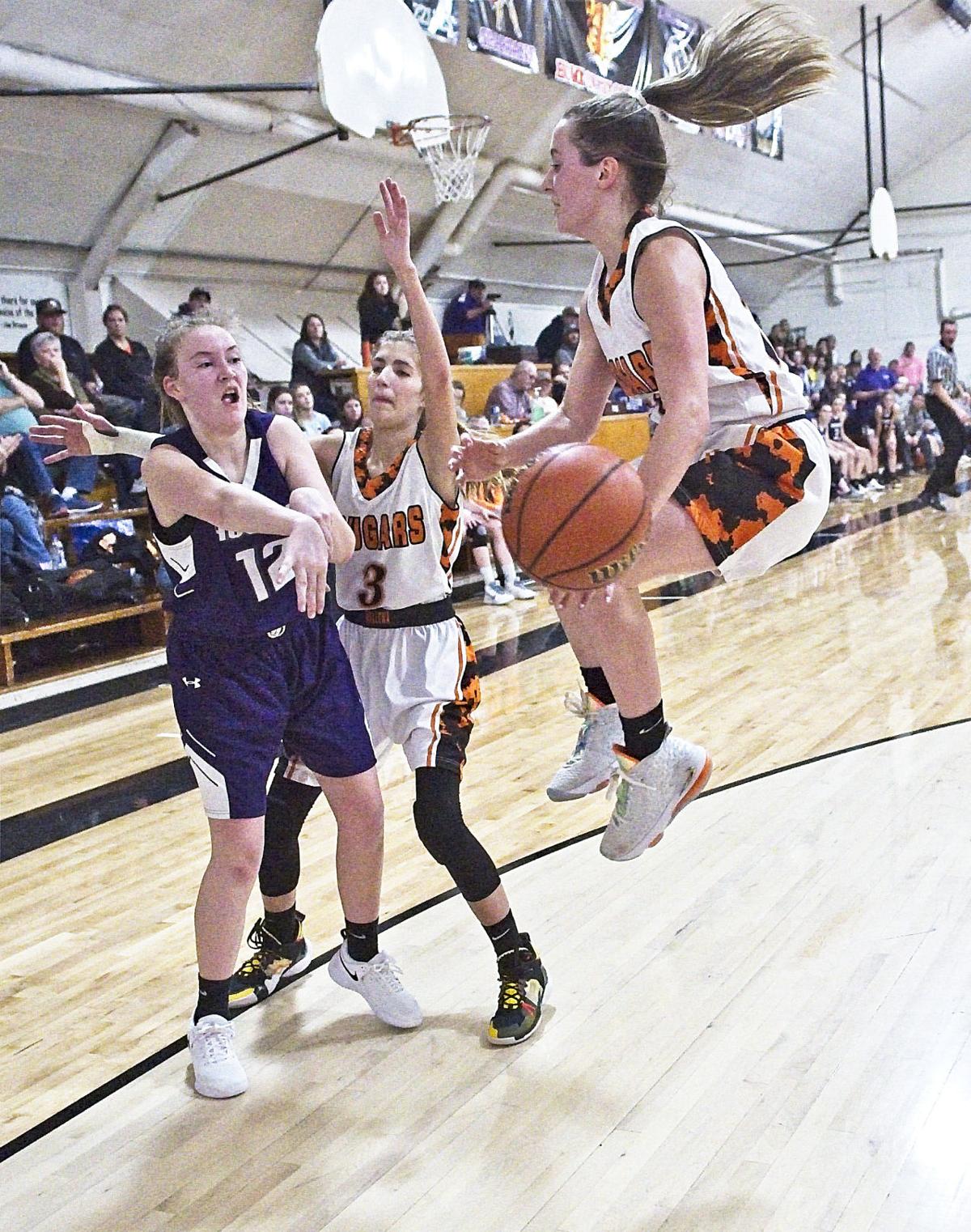 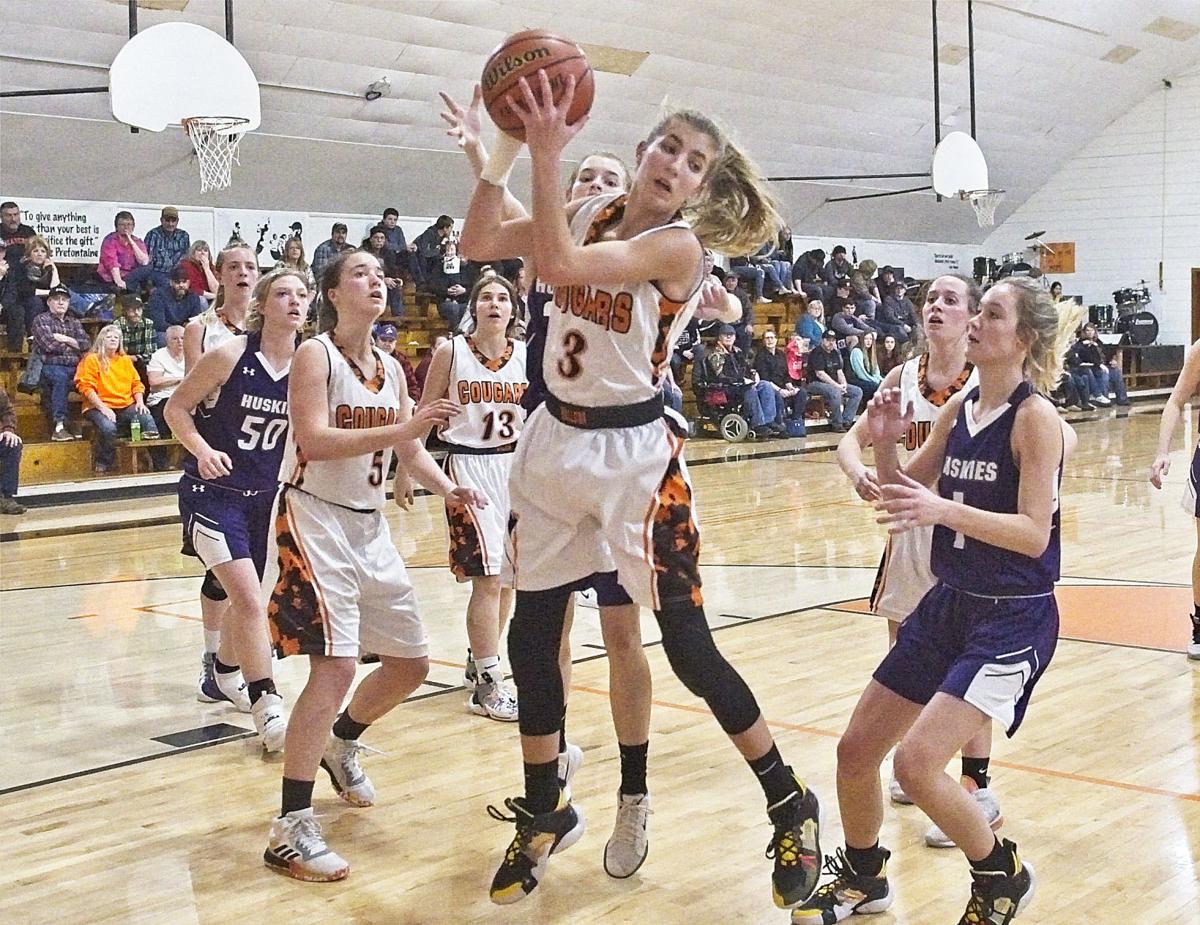 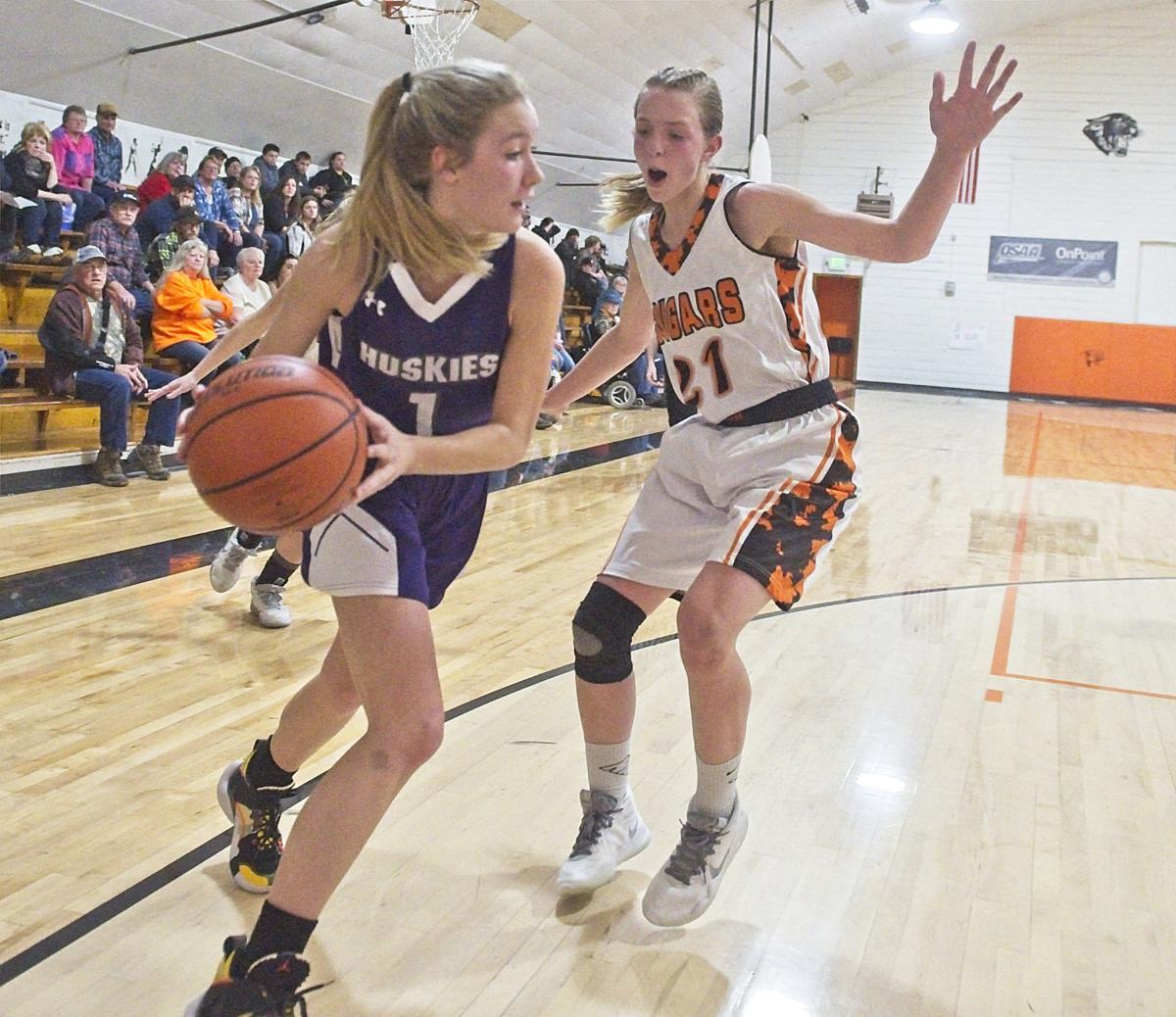 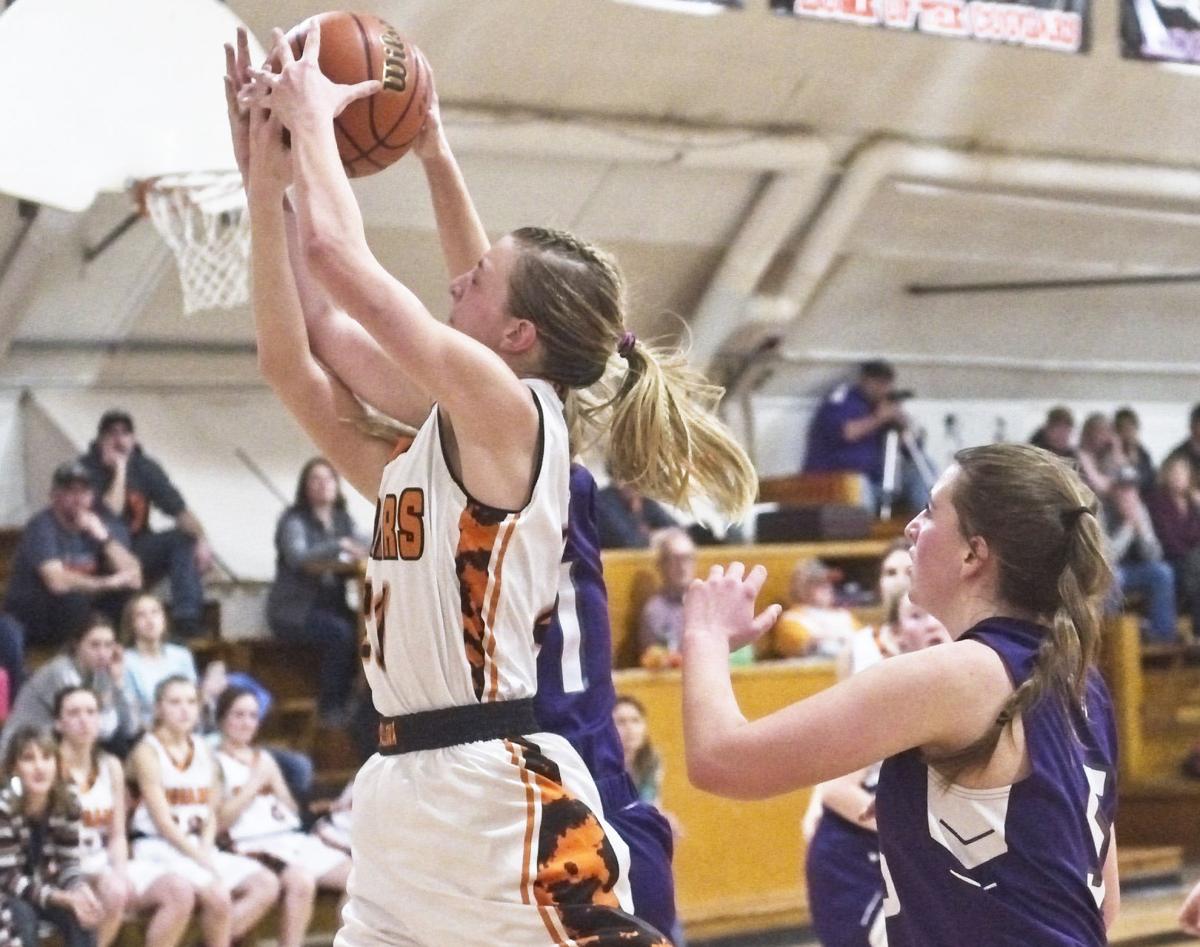 Wallowa’s Jamie Johnston contests a rebound with an Elgin player. 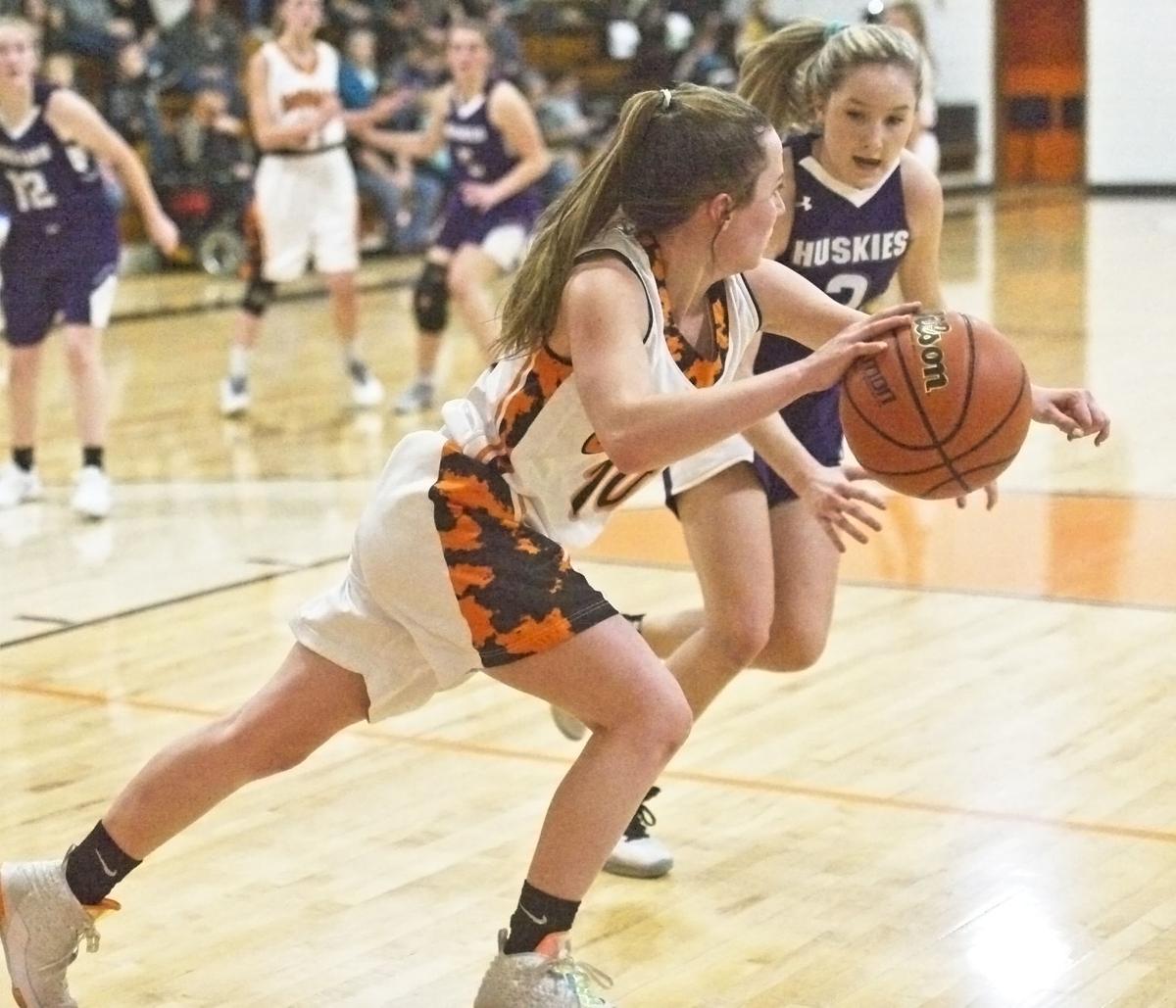 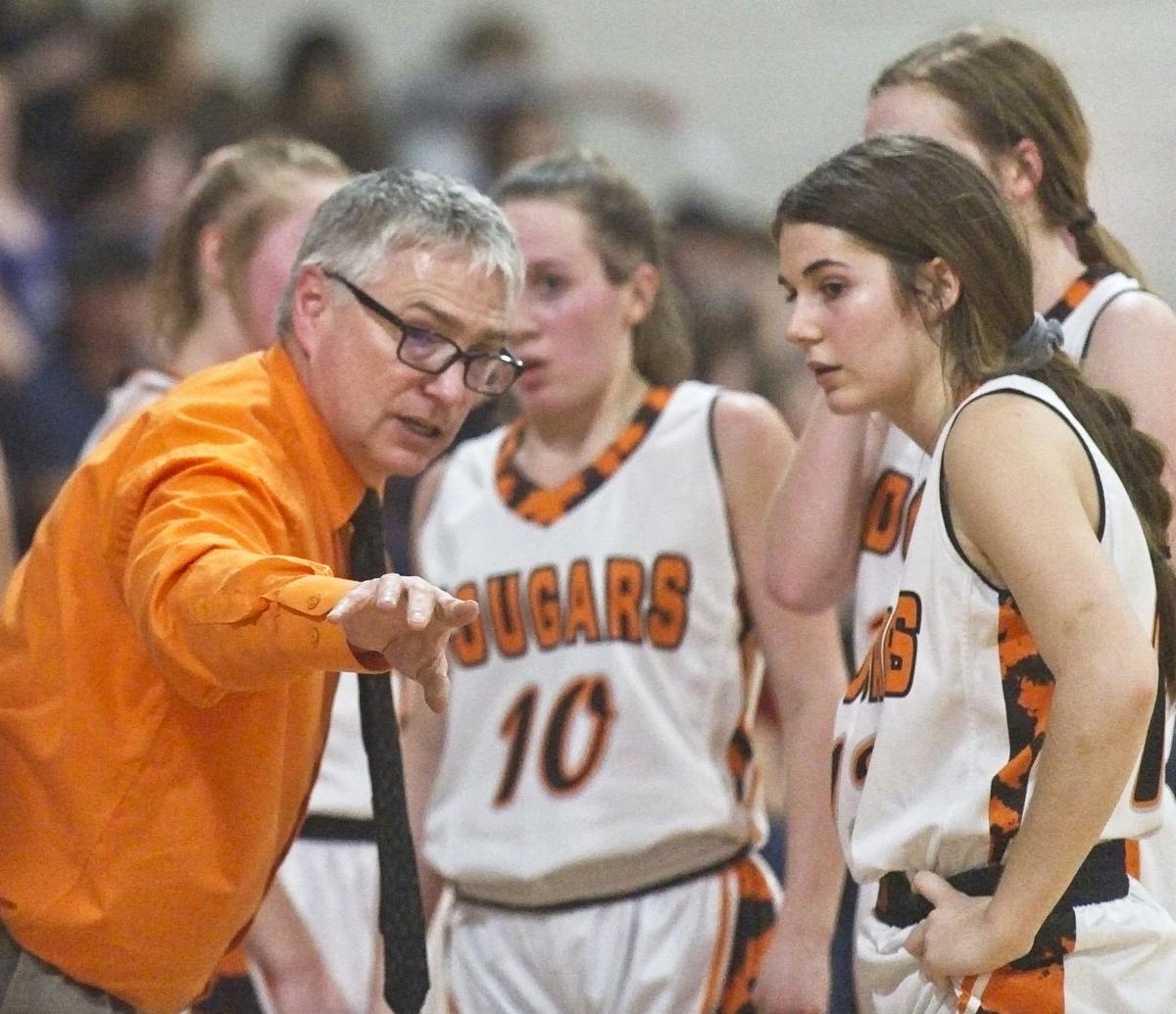 Wallowa coach David Howe offers some instruction to his team late in the game with Elgin.

Wallowa’s Jamie Johnston contests a rebound with an Elgin player.

Wallowa coach David Howe offers some instruction to his team late in the game with Elgin.

Wallowa Cougars girls come within a whisker of defeating Huskies, but fall to Golden Eagles.

The Wallowa Cougars girls came within a whisker of defeating the Elgin Huskies in the Cougar Dome Jan. 31. But Cougar injuries and fouls allowed the Huskies to dig out a win, 45-41. Cougars coach David Howe praised Jamie Johnston for outstanding play throughout the game. On Sat. Feb. 1, the Cougars traveled to Nixyaawii, where the tired team held their own against a well-prepared Golden Eagles squad, finally falling 42-54.

Against Elgin, the Cougars led 15-9 at the half in what seemed destined to be a relatively low-scoring contest. But there seemed to be trouble on the horizon for Wallowa. The team hit only three of seven foul shots and Ella Moeller’s usually-reliable 3-point bombs simply would not fall through the hoop.

But the Cougars clawed their way back into the game, and although down 31-24 with 6 minutes left, dazzlingly good play by Kyla Hook and Jamie Johnston put Wallowa ahead 32-31 with 4:45 left. A minute later the score was tied 33-33. Jamie Johnston’s foul shots and field goal kept them in the lead with about 2 minutes left. But Elgin tied the score at 38-38 at 1:30, and with less than a minute to go, Elgin took the lead 43-38 on shooting by Wilhelm and Tymra Anderson, and the Cougars were not able overcome the Huskies’ momentum.

Jamie Johnston scored 20 points for the Cougars, including six of nine foul shots. Kyla Hook contributed 11 points, including a soaring three-pointer and four of 11 foul shots. Hook and Johnston each accumulated 5 fouls in what was a tough, hard-played game that saw coach David Howe called for a technical. High scorers for the Elgin Huskies were Mariah Wilhelm with 19 and Gracie Evans with 10.

On Saturday at Nixyaawii, Wallowa started the first quarter well., leading 14-12 at the end of th first quarter. But the Golden eagles flew away with the game, outscoring the Cougars in the remainder of the game, for a win and a 54-42 final score. For Wallowa, Jamie Johnston with 16, and Haley Brockamp with 12 were the high scorers. Nixy’s Lark Moses, with 16 and Sophie Bronson, with 12 held up the scoring end for the Golden Eagles.