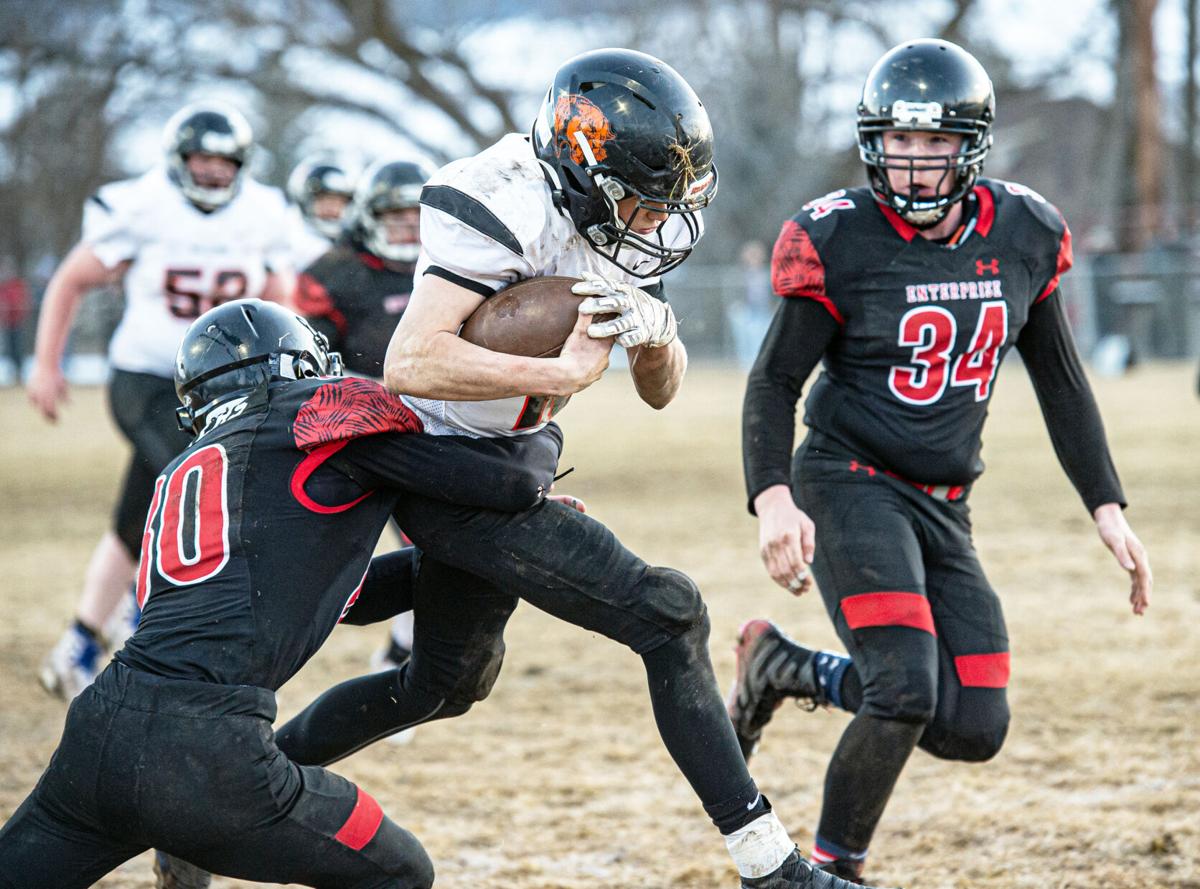 Wallowa’s Lute Ramsden runs between a pair of Enterprise defenders on Thursday, March 11, 2021, in Enterprise. Ramsden threw five touchdown passes and ran for a sixth in the Cougars’ 42-0 win. 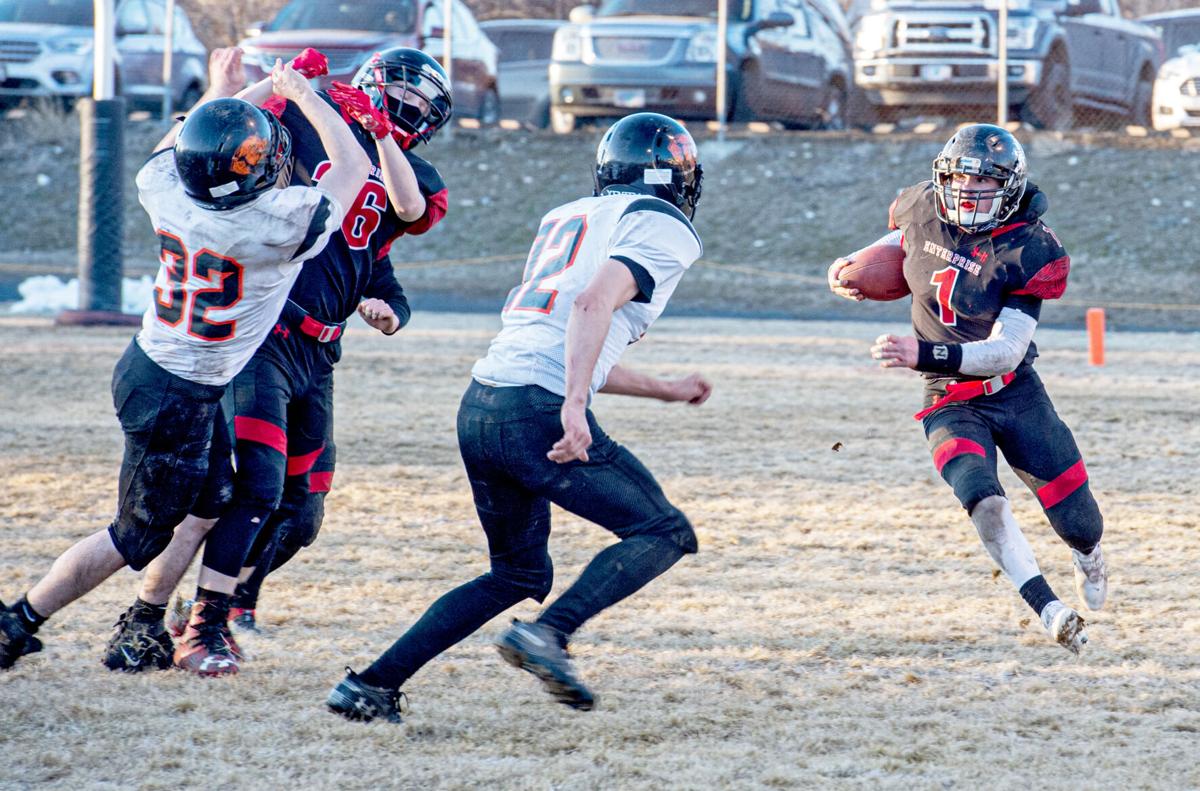 Enterprise’s Trace Evans looks for running room during a game against Wallowa on Thursday, March 11, 2021. The Outlaws lost, 42-0. 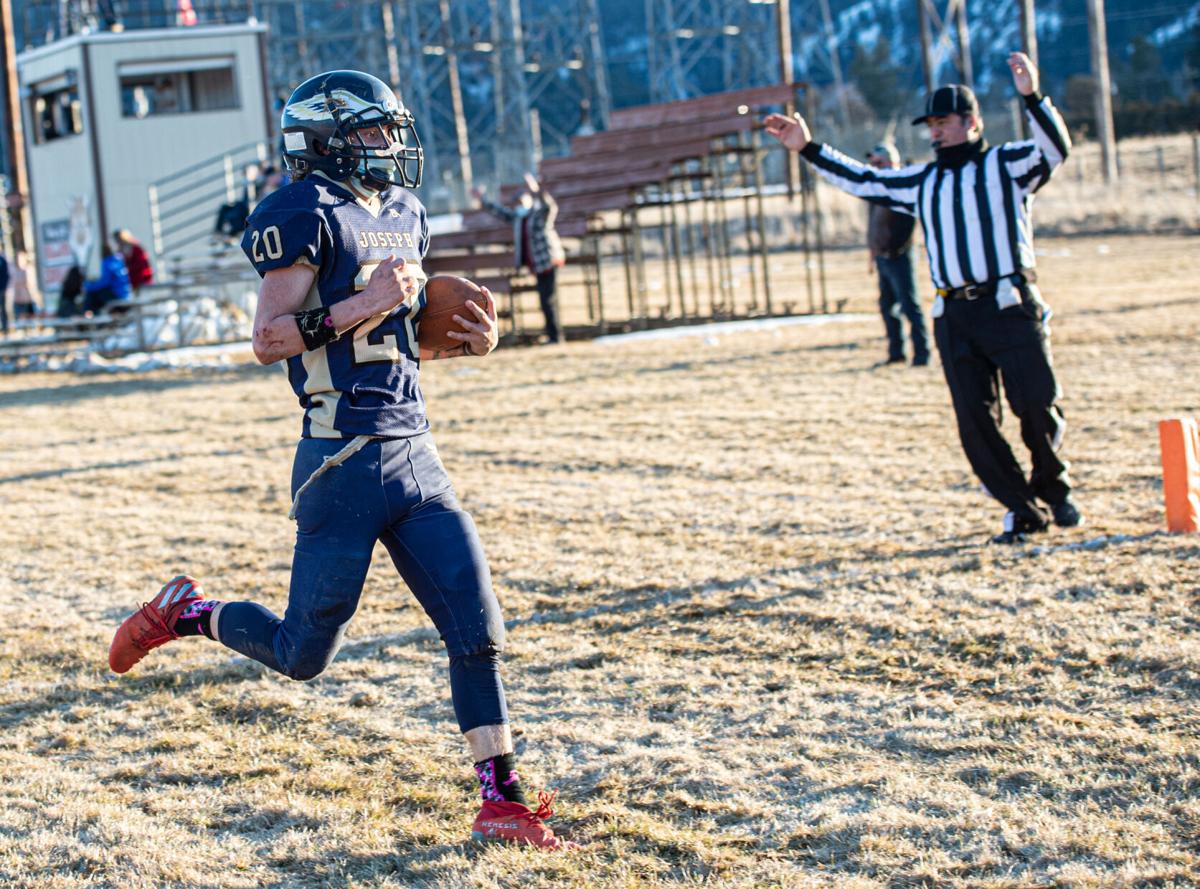 Joseph's Juston Rogers walks in for a touchdown during the third quarter of the Eagles' win 33-13 win over Dayville/Monument on Friday, March 12, 2021.

Wallowa’s Lute Ramsden runs between a pair of Enterprise defenders on Thursday, March 11, 2021, in Enterprise. Ramsden threw five touchdown passes and ran for a sixth in the Cougars’ 42-0 win.

Enterprise’s Trace Evans looks for running room during a game against Wallowa on Thursday, March 11, 2021. The Outlaws lost, 42-0.

Joseph's Juston Rogers walks in for a touchdown during the third quarter of the Eagles' win 33-13 win over Dayville/Monument on Friday, March 12, 2021.

ENTERPRISE — Wallowa looked solid in its first full-contact football game in more than a year.

The Cougars amassed 465 yards of offense and found success through the air and on the ground on the way to a 42-0 road victory over Enterprise Thursday, March 11 — the first game of Season 2 for both squads.

“It only took one play, and it was like ‘Man, I love this game,’” Wallowa head coach Matt Brockamp said. “We missed playing football.”

Sophomore quarterback Lute Ramsden was dialed in, going 17-for-22 for 239 yards passing and five touchdowns — three to Zeb Ramsden and two to Tristin Bales — while also scampering for 129 yards and a score. His 46-yard TD run to open the scoring in the first quarter gave Wallowa the early 8-0 lead.

A long catch-and-run by Bales of 77 yards on a short pass in the first quarter and another long catch-and run for a score — this of 72 yards on a screen pass to Zeb Ramsden in the second quarter — built Wallowa’s lead to 20-0. Another scoring pass to Zeb Ramsden for a 25-yard TD later in the second quarter pushed Wallowa’s lead to 28-0 at the break.

The Ramsden brothers connected for the third time in the third — Lute throwing a pass on a fade route to Zeb in the end zone for a 20-yard score — before another dump off to Bales later in the period went 17 yards to round out the scoring.

“We cleaned things up a little bit offensively,” Brockamp said. “We still had mistakes that were made, we had six penalties, some big holding calls. … But, for the most part, offsides (and) illegal motion were much better than last year. They learned a lot last year. It was exciting to see a dominant performance in Wallowa County.”

“They (Enterprise) had some success early on a screen that they ran a few times. They caught us early in a linebacker blitz, and had some success with the screen which they kept coming back to,” Brockamp said. “(But we) were able to play responsible football, and did a great job stopping the run for sure.”

“We helped by having guys that have not played before and are learning the game as we go,” he said. “Hopefully we can get it together this week and have a better showing against Union.”

Both teams are back on the gridiron at home Friday at 2 p.m. when Wallowa (1-0 overall) hosts Cove and Enterprise (0-1) entertains Union.

The Joseph Eagles scored a second win in their lone currently scheduled home game of Season 2 as they got past Dayville/Monument on Friday, March 12, 33-13.

The Eagle rode the legs of Juston Rogers to victory, as the senior running back rolled up 287 yards rushing and scored three touchdown. He also had a big day defensively, recording 10 tackles and causing a fumble.

Quarterback Trace Collier was 4-for-8 for 60 yards and a touchdown, Harley Miller had a TD rush, and Jonah Staigle anchored the defense with 13 tackles.

Monument definitely improve from last year and played a great game," Joseph head coach Duncan Christman said. "Penalties really affected this game, as we had four touchdowns called back because of them."

After a tight first half — and scoreless second quarter — that saw Joseph hold just a 12-7 lead at the break, the Eagles gained some breathing room in the third quarter, scoring twice to pull ahed, 26-13. A third touchdown in the fourth iced the win.