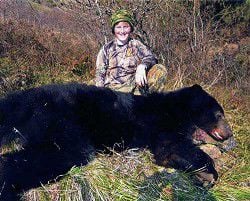 Cody Offchiss, 10, of Eugene used a rifle on a bear in Sled Springs after he won an archery competition and killed a deer with a bow and arrow. Wayne Endicott 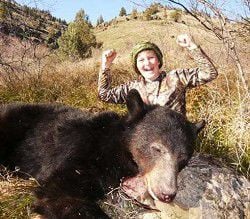 Cody Offchiss, 10, of Eugene used a rifle on a bear in Sled Springs after he won an archery competition and killed a deer with a bow and arrow. Wayne Endicott

Cody Offchiss was more than ready.

For weeks, the 10-year-old Eugene native had prepared for the April 16 trip to Sled Springs and his first bear hunt. He ran the two-mile commute to and from school in order to condition his body. And he listened carefully to Wayne Endicott, who manages The Bow Rack in Springfield. Endicott donated his tag through the youth mentor program of the Oregon Department of Fish and Wildlife (ODFW).

"There's nothing like seeing the passion in a kid," Endicott said. "The bear came out of the canyon. I got my camera and then said to Cody, 'Ok, this is it. You've got to make a perfect shot.' And he did. A textbook shot.Heck of accomplishment - and he loved every minute of it."

Endicott had taken Cody under his wing. As an infant, the boy lost his father. Growing up, Cody frequented The Bow Rack and he eventually proved himself a sharp archer. Two months before the bear hunt, he won first place in the cub division of the state's bow hunting indoor championships at the Chinook Winds Casino in Lincoln City. Endicott guided him on a deer hunt, and Cody used a bow to score an impressive kill. Promptly, Endicott put his name in the drawing for a bear tag.

"When I asked Cody," Endicott said, "you should have seen the look on his face. He was like, 'Really? Bear hunting?'"

This time, Cody used a rifle. Weeks of exercise paid off. Starting early in the morning in the Sled Springs unit, the duo drove and hiked through nine miles of snow over the hills. They spied the bear near a stream, closed to within 100 yards and Cody calmly shot on target. They remained in the snow, packing meat throughout the night until 11 o'clock.